Even though my new job is with a gym company…well there isn’t a gym in our office…nor any showers. So what I have do is take a sink shower. I don’t bother with wipes, well because they are a waste of money and you’re creating more trash.

Here’s what I do, I bring a little bag filled with my favorite liquid body wash, a wash rag and a little chamois.

Once I get to the office restroom, I bust out my wash rag and soap. I wet my head, face, arms, and neck. I then apply a generous amount of soap on my face, head and arms.

I get my wash rag wet and scrub my self with it. Then I rinse off all the soap and while I’m still soaking, I excuse myself to one of the stalls and continue to wipe my body down with my rag. Yup I’m commando in the stall, and I’ve also set out my clothes to change into.

While I’m nekit in the stall I do a little dance as I am wiping down my back, legs and…uh yeah…(oIo).yup them too. Then I take my chamois and dry off. Sprits a little bit of cologne… change into my work clothes and I’m ready for the day!

If you have another way of prepping after a ride to work, please feel free to leave a comment. Besides I’d like to know if there’s a better way of freshening up.

Got this one from the Xtracycle Blog.

Bicycling is good for the environment, good for the body, and good for our cities. We’re convinced it was a mistake to relegate the most efficient means of transportation devised by man to the aisles of recreation and sport alone.

Meet Russ Roca, he calls himself the “Eco Friendly Bicycling Photographer”. Not only is Russ a Bike commuter, he uses his bikes as his method of transportation for work. He owns a Trek 520 with a Xtracycle Freeradical,

a sweet Surly Steamroller with orange deep V’s built by himself and a Bike Friday Tourist (which he is selling by the way).

I asked Russ a few questions regarding his method of transportation:

Why did you decide to ride a bike instead of a car?

Commuting by bike really started by accident. Six years ago I was
telecommuting from home, so didn’t really need a car. I used it mostly
for picking up groceries and shopping. One day my car broke down and
it would have cost way more to get it fixed than what it was worth. I
decided to see if I could get along without a car. It was a bit of an
experiment. Lots of things happened then. I was outside more walking
and taking the bus. I realized how much of the outside world I was
missing. I quit smoking at the time too. I actually started inline
skating at first to get around, but found I couldn’t carry enough on
skates. So one day my neighbor gave me a mountain bike and I tried
tooling around town. I felt like a kid again and I was hooked.

How long have you been using your bike to ride to work.
I’ve been a full time bike commuter for about 2 years.

What is the longest commute that you’ve done on your bike to a photo shoot?

The longest commute to date is about 70 miles round trip. It was a
food shoot for COAST Magazine. The woman’s restaurant was in Laguna
Beach, which is about 35 miles south of Long Beach. I took PCH all the
way. It was definitely a long day. About 5 hours total cycling with
a 3 hour photo shoot in between. I also carried a bit of equipment
with me.

What do people think when you show up on a bike to a photo shoot instead of a car?

It’s a mixed bag. Some people get it. They don’t need any
explanation. They understand why I do it and are supportive. Others
look at me as if I just stepped off of a spaceship. No matter how I
try to explain it they just can’t seem to get that look of horror off
their face. I’m pretty good at telling how my clients will react, so
if I think it will help get a job or break the ice I’ll mention it.

What is the heaviest load that you’ve carried on your xtracycle.

The heaviest load I’ve carried is probably around 125 lbs. It included
my camera, 3 light stands, softbox, umbrellas, reflectors and a box
with 2 portable strobes and batteries. Not to mention a spare set of
clothing, food, water and tools.

How has the Xtracycle made your job easier.
The Xtracycle has made my job possible. If it weren’t for the
Xtracycle, I don’t think I could be as car free as I am. I’ve used
single wheel trailers and double wheel trailers, but they don’t compare
to the versatility of the xtracycle. I’ve used it to go shopping, to
bring other bikes to a bike shop, to carry my equipment around and to
even advertise my business.

Do you have a funny or an interesting story about a ride?
Every ride is a mini adventure of some sort. Since I freelance, I’m
always going to different places. Today, I had an assignment that was
about 25 miles away. I almost ran into a horse. Part of the trail is
buy an area where people keep horses and they take them on walks on the
bike trail. I was exiting a tunnel under the freeway just as a guy on
a horse was coming in. On the ride back, I saw a falcon swoop down
and snatch up a little bird. It was something out of the Discovery
Channel.

There are also urban adventures. Battling through stop and go traffic,
getting honked at and navigating through streets where people have
never seen a bike before.

Any advance commuter tips that you may want to share?
As you approach an intersection or driveway, always assume the car you
hear behind you is going to turn in front of you. That has kept me out
of lots of accidents. Also, for me, I like to wear wool shirts when I
commute. The thin smartwool shirts are great because they breathe
well, dry quickly and don’t stink. I hardly touch my synthetics now.

Russ’s view on Bike commuting:
I think the bicycle will be a tool for change in the future. But for
it to take a big impact, we need more commuters. People have to see
the bike as a utilitarian object and not just a toy. Sadly, in the US,
bikes fall under expensive road bikes, expensive mountain bikes or
cheap knock offs of the two. The whole middle ground of utilitarian
cycling is missing in LA.

For me, every day I’m riding in the streets with all my gear, I’m
hoping that at least one person sees me and thinks, “wow, that’s
friggin cool. I want to try that.” I think as bike commuters, we’re
also ambassadors. We’re early adopters. Bike commuting can only go in
one direction in the US and that is up. The more people we can get to
try it, the bigger social network we can create around the bicycle, the
more successful we’ll be with increasing the number of bike commuters.

As you can see, being carfree IS possible in Los Angeles. Check out Russ’ website (www.russroca.com) for more information about his photo business and check out his blog to see what he is up to next.

We want to thank Russ for his time, pictures and contributions to the bike commuter community.

I’ve been at my new job about 2 weeks now. So far so good! I decided to give commuting to my new office a try and see how it goes. I used to have a job right accross the 405 freeway from where I’m at and I’ve commuted there before.

Here the start of my commute. 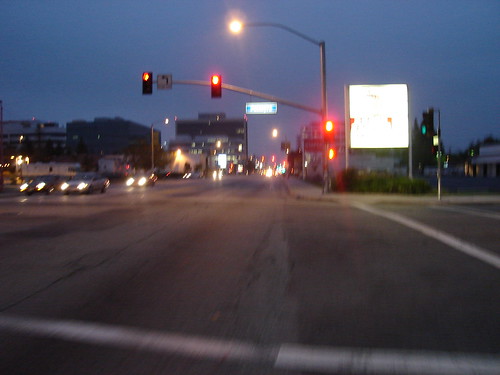 From my house to my office, its about 22 + miles. I figured I’d give it a try…at least half way and see how well I do. 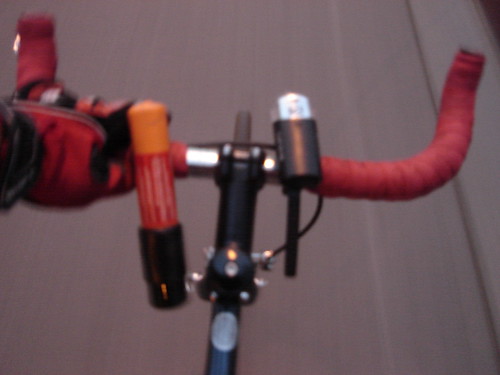 I drove to my friends house in the city of Orange and parked my car in front of his door. I then set out to Irvine. From Orange to Irvine its about 12-13 miles.

Check out this sign…cool eh? 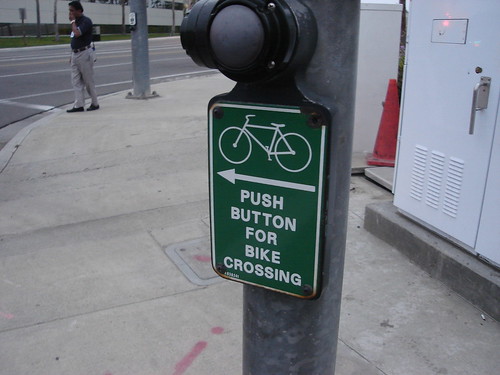 John Wayne Airport…sorry its blurry I was going uber fast on my bike! 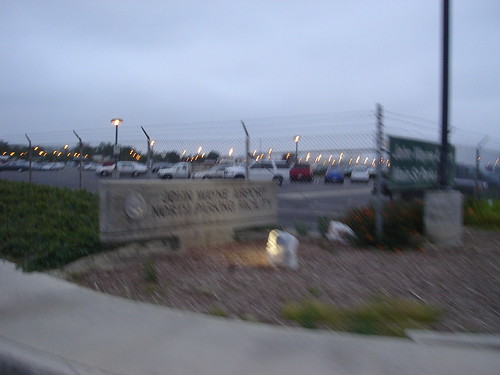 To my surprise I got to my office in about 35 minutes! I locked up my bike, and got on the elevator. 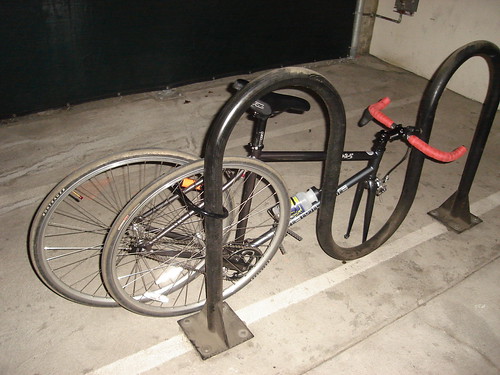