Bike Snob NYC did a of post about the possible extinction of Bike Messengers. He also tried to start a ‘Save the messengers’ campaign, but it was quickly abandoned.

So then, it just hit me, I don’t think I ever seen a bike messenger in L.A!

Even though I don’t hang around downtown L.A. much, the times I’ve been there, I don’t think I ever seen one. A search on the internet yielded a page of L.A. Bike messengers that has not been updated since 2004. Could it be that Bike Messengers have already become extinct in LA?

What do all three have in common? A three wheeled contraption called KMX Karts…Moe and I along with a our friend Scott, spent yesterday with an MTV Show called Parental Control. I wrote a report chock full of photos from the festivities on MtnBikeRiders.com 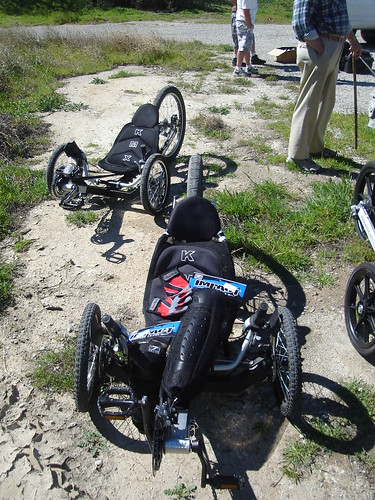 This is useful in the event that you have to hop onto the sidewalk when a car cuts you off or you see a pot hole in the middle of the road. Mountain Bikers and Bike Commuters can both benefit from this Tech Tip!

We have more Thursday Tech Tips on MtnBikeRidersTV.com

Just thought I’d share this video for those that may have not seen it yet. It’s a video by Clarence Eckerson from BikeTV that shows the 2005 Cargo Bike World Championship. Some interesting rides in the video. The Checkered Courier longhaul (aka Long-Jan..named after its maker) is from the Center for Appropriate Transportation in Oregon. You can also spot a few pedicabs, cargo trikes and trailers. Hodari Depalm, the winner of the race, is rocking a Bilenky!

Note: Some adult language near the end 🙂

So I’ve been preparing my files for tax season and I remember reading something a few months ago about possible tax credits for those that opt for alternative modes of transportation. Digging around to find something that I can show my tax accountant, I was pretty disgusted at what I found.

First off, from BikePortland, I learned that the tax break I had read about did not survive it’s initial introduction. Secondly, there’s a Hummer tax loophole, that allows businesses to write-off the costs of luxury SUVs at a certain weight. WTF?!

From the MSN article:

Under previous tax legislation, business owners were allowed to select for company use one of several light-truck models weighing more than 6,000 pounds fully loaded and write off most, if not all, of the costs on their tax returns. The law allowed for an immediate deduction of up to $100,000. Sharp-eyed business operators were quick to notice that most of today’s sport utility vehicles met the weight limit. Soon, Hummers and Escalades replaced sedans as the business vehicle of choice.

This may be old news for some, but I’m really floored by all this. The tax legislation was adjusted after criticism, but cmon! There were even credits for hybrids, but god forbid they give incentives to people who are doing something positive that isn’t part of the industrial-auto-petroleum-government complex.

But, what can you expect when we have tools (and dull ones at that) like this in positions of power….

If these two guys were Park tools, the little blue rubber stamp on their foreheads would be AH-01 and AH-02 (email me if you can’t figure out what the “A**” and “H” would stand for…).

I suppose what all this really boils down to is consumption. We as bike commuters just don’t consume enough stuff to be on The Man’s radar. Or, if we are consuming stuff, it’s not the right stuff. It’s not big motorized vehicular stuff that uses black oily stuff that puts a bunch of green stuff in the pockets of men with lots of stuff. What’s a bike commuter to do to get some love from The Man?