Our friend Andreas of the excellent site London Cyclist submitted the following article — we’re all very eager to hear your thoughts on this issue:

They say any publicity is good publicity. However, for cycling there are three frequently heard news pieces that frustrate those of us who are already cyclists and discourage those of us who want to become cyclists. You’ve probably seen these in some newspapers before but feel free to add any in the comments.

Of course the statistics show that cyclists only cause a tiny number of injuries to pedestrians compared to the injuries caused by cars. For example of the 204 people killed on Londonâ€™s roads last year none were caused by a cyclist.

Based on personal experiences of cycling I would say the amount of anti-social cyclists is small. I would think there were far greater problems to tackle than a cyclist bumping up and down a pavement on a rare occasion.

Cycling is unsafe
This is another highly favoured angle in news articles. Of course with newspapers doing their best to constantly remind us about the dangers of cycling people start to believe it. The truth is there is a lot a cyclist can do to make it safer for themselves such as keeping a prominent position on the road. Training can help make cycling even safer. If you couple this with good cycling infrastructure then the dangers are slim to none.

The chances are more likely that by cycling you will prolong your life rather than end it short. Of course this angle is not quite as thrilling for many newspapers.

A bike was involved in an accident with a car
Generally this sentence should read a car hit a cyclist. Recent research has shown that in the vast majority of cases (93%) the cyclist is not to blame for the accident. Yet, in newspapers it is a rarity for the article to hint towards blaming the motorist. Often instead it is reported a mutual role had to be played by the motorist and cyclist in the accident.

In some cycle friendly countries such as the Netherlands in an accident involving a car and a cyclist the blame is automatically placed on the car unless proved otherwise. This doesn’t mean cyclists end up cycling around like crazy it means cars are extra careful because they know they don’t have the law on their side.

Could 2010 be the end of it?
I know that cyclists are not angels floating around with haloes circling their heads — which I realise is how I may have come across in this article. We too are guilty of bad cycling, not showing enough courtesy to other road users and skipping red lights. The major difference is that when cyclists do it the negative effects on those around us are far smaller than those caused when motorists are irresponsible.

With that in mind Iâ€™m hoping the bad press cyclists get decreases because it is discouraging new cyclists from getting involved. Maybe it can be a new years resolution for newspapers?

I would really like to hear what everyone else thinks. Do you agree / disagree? Is there any other negative publicity you wouldnâ€™t mind seeing the back of?

Thanks, Andreas…now let’s hear what YOU think about this undeserved negative publicity.

From all of us here at Bikecommuters.com, we wish you all the very happiest of holidays. Here’s to another fabulous year of pedaling for fun, health, money-savings and environmental awareness…oh, and sanity! Thanks to all of you for reading. 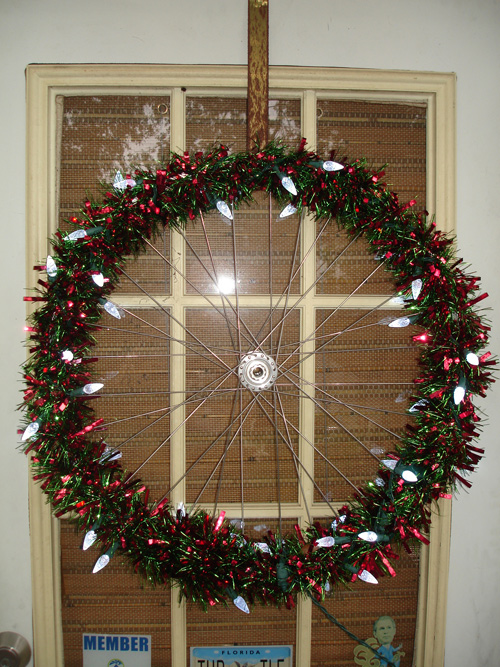 Today I rode my bike; ordinarily that statement would come as no surprise. But unfortunately for the past couple of weeks, I’ve been battling congestion, sore throats, fatigue – cold symptoms that just wouldn’t quit! – and I’ve not been riding.

On my final work day this week, I’m happy to report that I bike commuted. In the wind and sleet, I smiled all the way and enjoyed breathing in the crisp air. I wished I could just keep going.

It’s the best gift ever – not the ride – but the restored health so that I can ride. 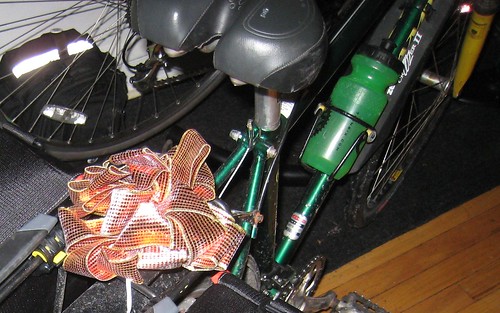 Even the green machine got “dressed” up for the holidays, sporting a red and gold holiday bow from my mom.

As some of you might know, Bikecommuters.com is one of the sponsors of the Mtnbikeriders.com Racing Team. The team had an INCREDIBLE year, and we’re all extremely proud of their achievements. Heck, one of the team members came this close to a National Champion jersey in her division… 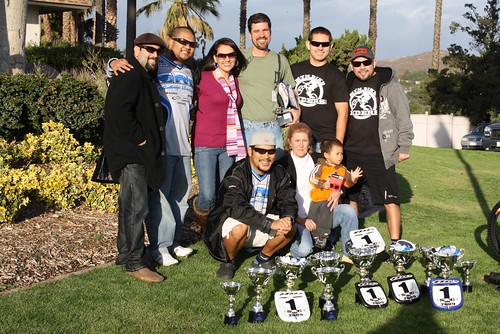 Check out coverage of the Southridge Racing Club’s “Southridge Series” annual awards ceremony, where our team took home a truckload of trophies and accolades by clicking here.

Here’s to a successful racing season in 2010 — all you “go-fasters” do us proud!

Earlier this month De Fietsfabriek-USA packed up the truck in Chicago and hit the road heading west along Route 66. In October I wrote about their Grand Opening party. 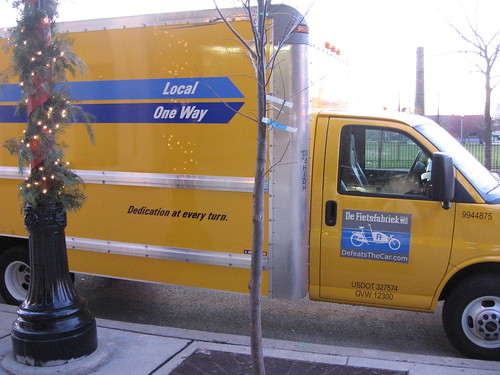 And now they’ve reached southern California! So, for all of our bike commuters and bike lovers on the west coast, please look out for Jon Lind and his fleet of Dutch bikes.

He will have the bikes on display and available for test rides this Saturday – TODAY! – at Orange 20 Bikes (corner of Heliotrope and Melrose in east Hollywood) from noon until 6 pm.