I’ve been asked to do some background research for a railway advisory group. This group is interested in gathering a variety of information for a major rail carrier relating to both recreational cyclists/travelers and multi-modal commuters (bike/rail) for the purposes of developing new stops, routes and procedures for moving bikes and cyclists aboard trains.

Although I’ve spent a lot of time traveling via train (I don’t fly), I’ve never traveled with a bike…nor have I had the opportunity to go multi-modal. Anyhow, what I’m hoping you could provide is your experiences using trains and bicycles together. The kinds of information that would be useful are:

–how are the bicycles stored or secured onboard? In a separate cargo car or mixed in with passengers?
–any fees you might have encountered while bringing a bike onboard
–hits/misses in the experiences you’ve had. Was it good and efficient or a nightmare of logistical headaches…or somewhere in between?
–what was the purpose of your travel: for recreation or for commuting purposes?
–any specific policies or procedures that worked or needed improvement?
–whatever else you care to add about your time onboard

Please indicate where you used a rail service in your comments…and thanks in advance for participating!

Here’s an interesting one sent in by longtime reader Phil:

So, this afternoon, a co-worker and sometime bike-commuter and I were talking about riding/commuting and car-pooling. I suddenly thought, why not bike-pooling? This lead to wondering about numbers of riders “bike-pooling” to work via tandems or the likes. People living along the same route to work could “share” a tandem.

I’ve heard of “commuter trains”, where folks gather at a convenient starting point and riding en masse to their job(s), but haven’t run across anyone doing the tandem number. Anyone experienced such a thing? Good idea or not? I would imagine various logistics would need to be ironed out — work start/stop times would have to mesh between the two participants, among other things.

Let’s hear your thoughts and experiences in the comments below.

Have a cycling-related question? Just Ask Jack! Click on the link in the right-hand column to send me your questions.

I’ve been eyeing a new bike for a long time now. Not that I really NEED a new bike, but this one has some nostalgia behind it.

This is the KHS Hot Rod.

When I was a kid, I recall my cousins and I would ride bikes around with the two of us on the banana seat. Good times…KHS has had this bike in their line up for a few years and since the day that I laid eyes on it, I’ve wanted it. However, being a responsible adult, there are some obligations that I’ve had to take care of. But now I have the funds to pull the trigger and I can’t wait to buy it!

Back in December, we took delivery of one of Swobo’s newest creations: The Baxter. The striking form and stellar fit-and-finish should come as no surprise. It was planned and laid out by Sky Yeager, a renowned bike designer. Now it’s time for me to talk about my adventures. My very first impression? The bike itself feels a bit like a fast cruiser bike. I like it. A LOT. 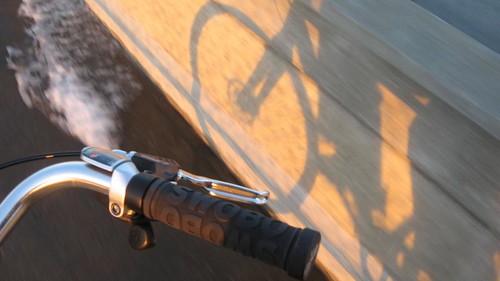 The night I assembled the Baxter, it had started snowing. In fact, if you look closely, you can see some snow on the floor of the breezeway: 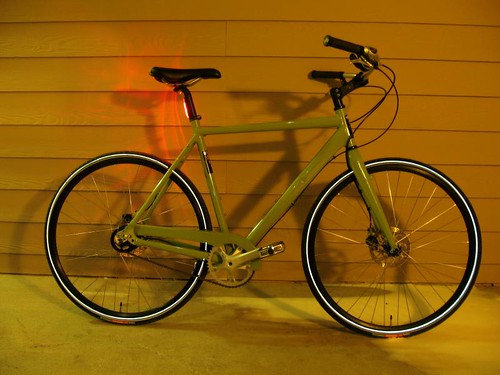 This snow would set the pace for the vast majority of my trial run with the Baxter. With 700×28 tires, I was just a little concerned.

The first morning out, I decided I should probably ride to the bus stop, which is about a 3 mile ride for me. The upright position is great. You are up and above most compact cars on the road. You’re aware of everything around you, and the surprisingly bright, pulsating integrated seat-post tail light meant that I was getting a whole lane to myself in the dark, wee hours of morning. For short trips under street lights, I use a Blackburn Flea on strobe mode as my only headlight. It was my only accessory for the first few days.

With just a little snow on the ground but more in the forecast, I decided that I’d ride the Baxter all the way home from work without the bus, a trip of about 15 miles. It had warmed up to 19 degrees, and I have ridden the whole trip in far colder. With my backpack stuffed full of extra layers from the 3*F morning commute, I had a significant load on my back. The upright position is pretty much non-negotiable. A stiff and cold headwind meant slow speeds, dry eyes and windburn, but some shallow snow was enjoyed! 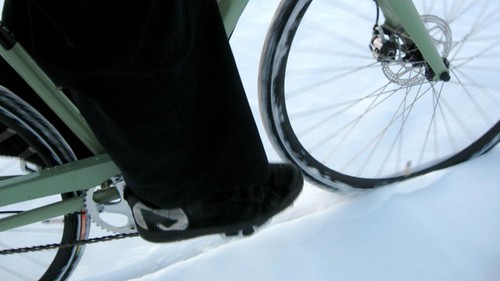 Let me make this pretty clear. I’ve tried riding that distance (at speed, in traffic) on my wife’s Electra Townie before. While the Baxter isn’t quite a “beach cruiser” like the Townie, both bikes force you to ride upright. This is usually a recipe for disaster on longer, quicker-paced rides.

The Baxter comes with an Alfine hub, which shifts smoother, doesn’t complain when you shift it under a load, and overall feels a lot more sturdy than the Nexus internally-geared hubs I’ve used in the past. It handles somewhat aggressive riding, shifting while out-of-saddle hill-climbing and other abuse very well. On my long commute, this was a welcome feature. In Urban Kansas City with all its hills, the 8-speed gearbox was also a life-saver.

It’s worth noting that this is the second most expensive part of the bike next to the frame. Buying a wheel laced to an 8-speed Alfine would cost as much as a whole entry-level bicycle at a reputable shop, so it most certainly contributes greatly to the Baxter’s $1099 MSRP. It’s also worth every penny. The only maintenance I performed in a month and a half of riding salty, slushy grime was a periodic wipe-down of the bike and re-lubrication of the chain. Even at near-zero temperatures, shifting was precise and predictable. 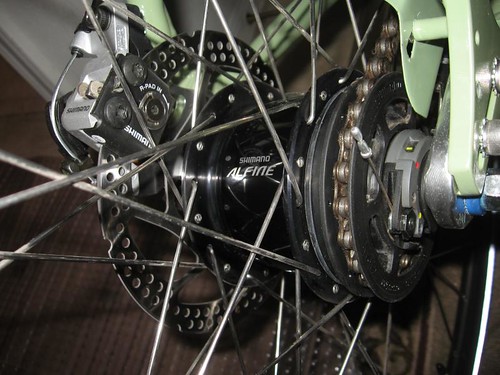 First gear is good for climbing, but it’s nowhere near as low as the lowest gears on my road bike or mountain bike (both with triple cranks). The highest gear (97 gear inches by my calculations) is plenty higher than my mountain bike (84 gear inches), but doesn’t hold a candle to my road bike’s massive 52×12 top gear (114 gear inches). The Baxter should go well over 25 MPH at 100 RPM cadence in its top gear, but given the wind resistance of sitting bolt upright, that seems terribly generous unless you have a great tailwind or a long downhill journey.

The next thing I did was try to test-fit my Cascadia fenders and Sun-Lite rack. This is where things got a little tricky, requiring some of the oddball hardware that came with the fenders to move the fender-stays away from the massive disc-brake calipers. A few washers here, a long bolt there, and things finally came together. Add-ons aren’t quite as straight-forward when you’re dealing with disc brakes, but any bike shop should be able to help you get these accessories installed if you can’t figure it out. One thing Sky did when designing the frame was include copious amounts of eyelets for things, including separate eyelets in the rear for a fender and rack and accomodations for two water bottle cages. Urban errands were definitely taken into consideration with this bike.

With the slow speeds, slush and snow, I didn’t feel like dealing with the fenders. They’d just clog up. I left the rack on for the duration of my test, though, and used the spring-clip to hold a mud-guard in place. Really, I’m a pannier guy at heart. 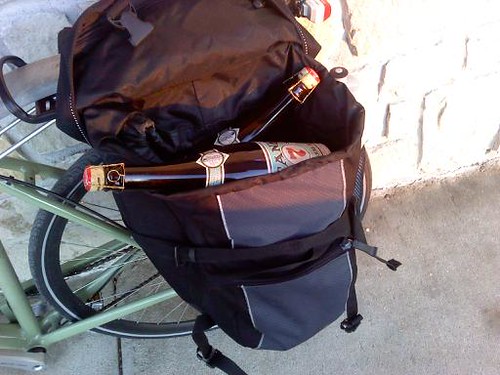 This was my first time riding a bike with disc brakes more than a few miles. I certainly appreciated the pizza cutters in the weather conditions we had. As expected, they stop the bike promptly, but they’re not overbearing, even in horrible, slippery slush. 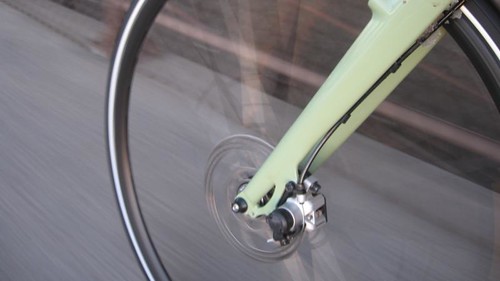 By this point, it should be pretty clear that my apprehension about using the 28mm Vittoria Randonneur tires in the snow was all for nothing. While the skinny, lightly-treaded tires weren’t nearly as sure-footed as the knobby, two-inch-wide monsters on my mountain bike, they held their own very well… 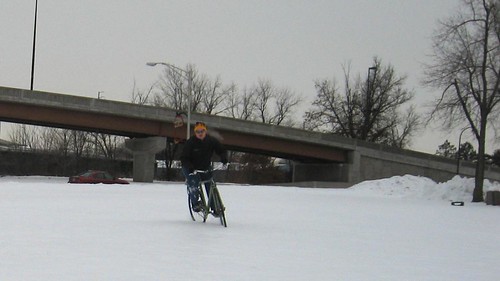 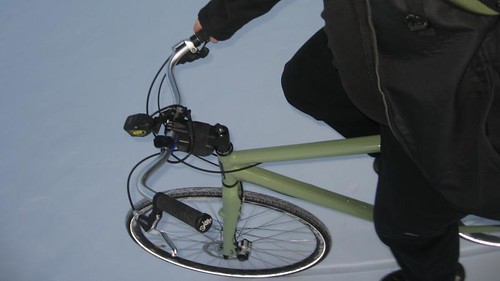 … until the snow got more than two-to-three inches deep. Then, the bike gets buried. Note those bright, reflective sidewalls. This photo, unlike most, was taking with my phone and the light reflecting off the tires is from the tiny LED “flash” on my phone. On a side note, I’m not sure that even a purpose-built snow bike would have gotten me through this stuff very easily, as deep and loosely packed as it was. I had to walk a ways after taking this pic. 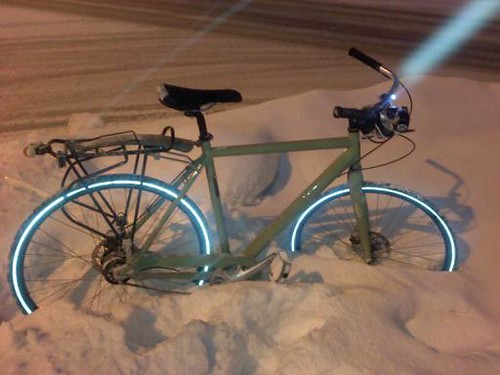 The Baxter was absolutely perfect for my usual winter multi-mode commute, where I use the bus and bike combined to get around town. For short errands and rides of under 5 miles, the Baxter is an awesome ride. It’s versatile enough for daily use, pretty enough to show off to your friends, and an absolute blast to ride. Everywhere I went, I got comments about it.

I used the Baxter every single work day of my test period, well, at least until January 8th when I got laid off. When I got home, I used the very clever built-in bottle opener under the saddle to crack open a cold one before beginning the job hunt. 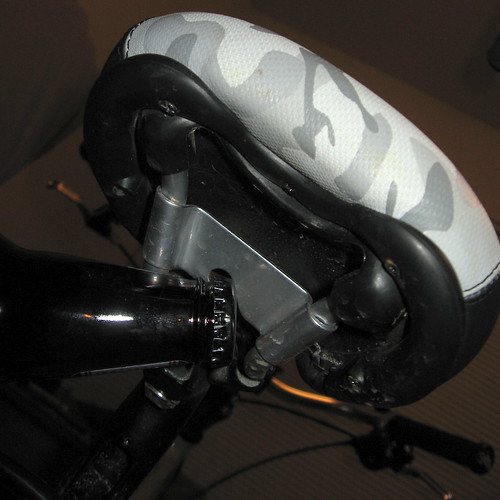 Editorial by RL Policar: The Swobo Baxter is considered a DEMO bike, meaning it will be going back to Swobo once testing has been completed.

I was laid off almost two years ago, luckily, I found a job within two weeks. However, my new job was located 37 miles away (one way) making commuting on bike extremely difficult. I considered multi-modal commuting, but the transit system in LA really blows. It would have taken me two hours to get to work! That basically left me with using my bike to run errands and recreational riding.

I ended up switching jobs again putting me in a position to dust off my trusty commuter bike and start hitting the roads of Orange county. I’m planning to start riding once there is enough light for me to ride safely during the evening. My commute will involve riding the Santa Ana river trail and I’m guesstimating that I will save at least 15 minutes and lots of aggravation.

So I’m wondering if this economy affected your bike commuting, are your riding less? Or are you riding more since it is cheaper to ride a bike? If you had a car, would you consider riding your bike up to an interview? Did you have to get rid of any bikes since times are hard? Please share your story by leaving a comment.