Now that spring weather has finally arrived in Chicago, the roadways and bike paths are showing the signs of winter wear and tear. I was going to title this post – “My biggest cycling gripe” – but really it’s more the biggest hazard: POTHOLES!

Let’s face it, our pavement simply takes a beating through the temperature fluctuations, the heavy traffic and the salt that’s applied to keep ice at bay in the frigid winter. In recent months, I’ve been dodging more potholes – holes that reach down to the old street cobbles, even in the bike lane! 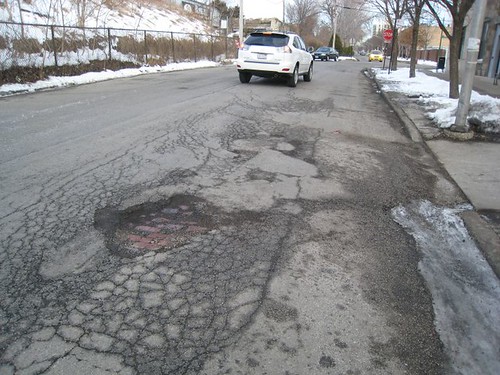 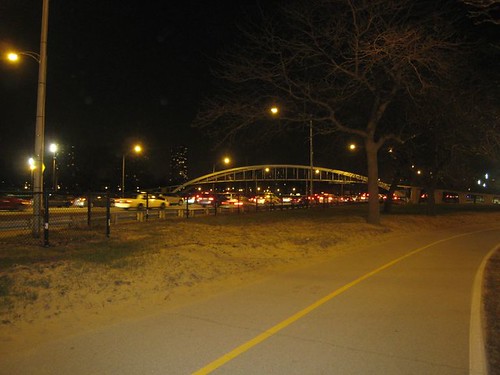 I thought the worry of terrible road conditions wouldn’t trouble me until I came upon this “patch”! 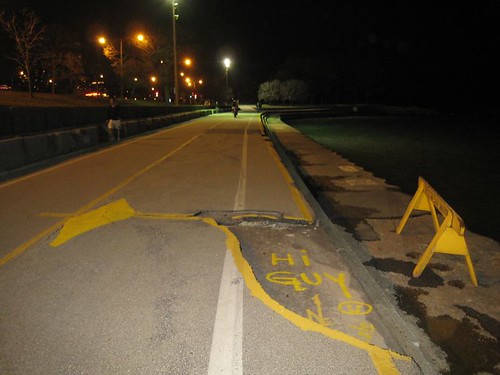 An encounter with a pothole a few years ago sent me flying off my bike; luckily no cars were around. Ever since then I’ve realized just how dangerous roads can be.

Many of us here are fans of bicycle racing…heck, we even sponsor a racing team (Mtnbikeriders.com Team — home of champions)!

So, I was very excited to head to downtown Tampa yesterday to catch the 2nd annual Tampa Twilight Criterium. This was a day-long event, combining 10 individual racing categories and several special events for families and local celebrities. We were able to spend a couple hours there and caught the 35+ Men and Women’s 1/2/3/4 brackets. The racing action was FAST and thrilling! 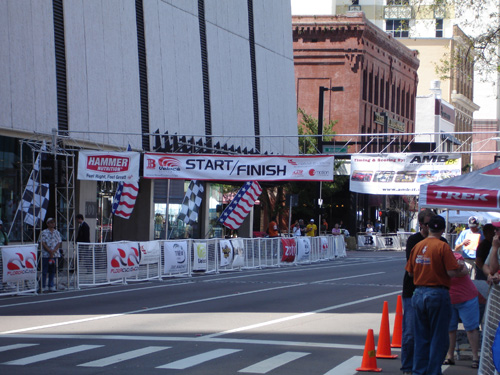 Coupled with the races was the ECO.lution Festival in the Lykes Gaslight Park and surrounding streets. The entire area was bustling with festival-goers, racers and spectators and was a beautiful day for families to enjoy all that downtown Tampa has to offer. Here’s a shot of “tent city”: 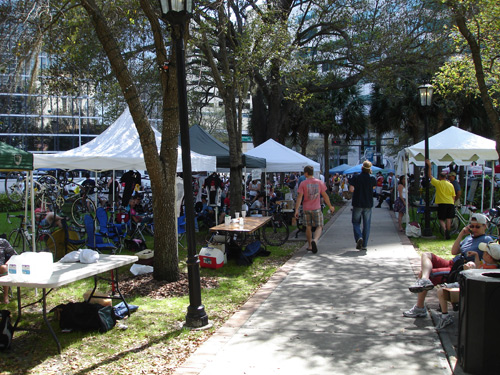 The festival was sort of a who’s who in local cycling endeavors…SWFBUD member shops, the Tampa BayCycle folks, the Tampa Bay Bike Co-op and many others were in attendance. I couldn’t walk 10 steps without running into another cycling friend or local celebrity here! 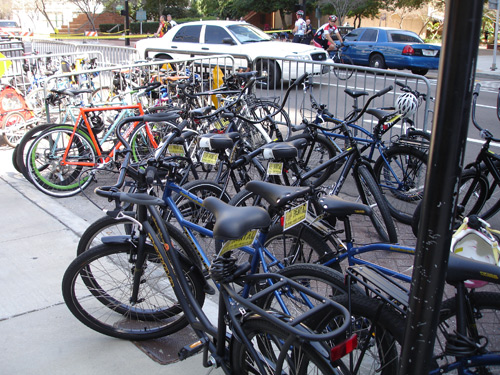 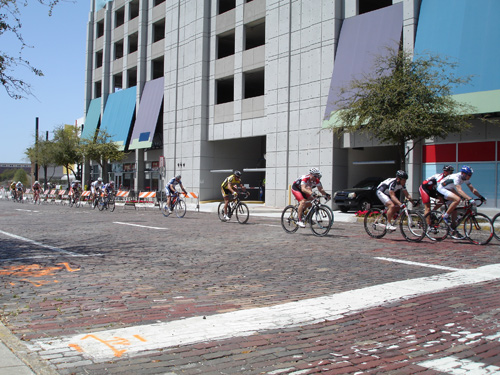 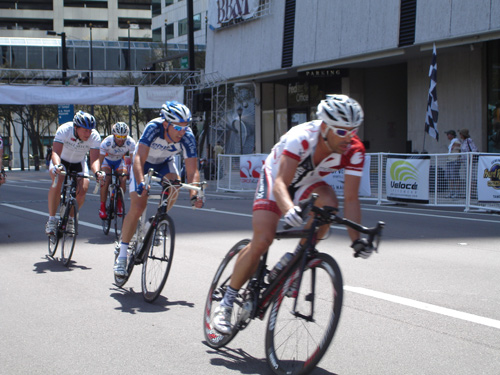 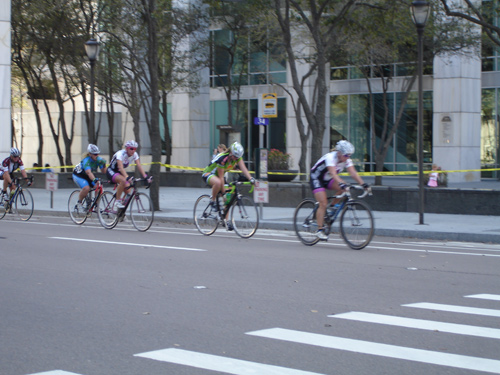 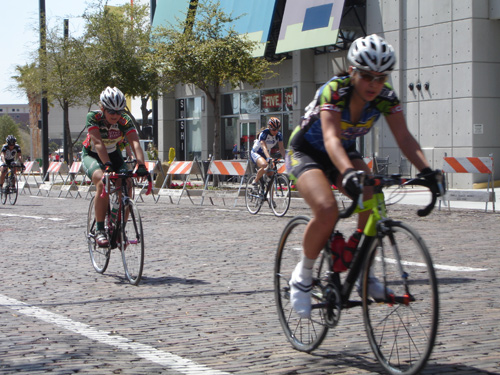 (note to self…I have GOT to get a better camera!)

As we walked away from the event, we discovered that the City of Tampa even blocked off a section of street for bike polo, something I’ve known about around here but never seen in person. It was pretty cool to watch, and my kids loved the wheel covers and the players’ bike-handling skills: 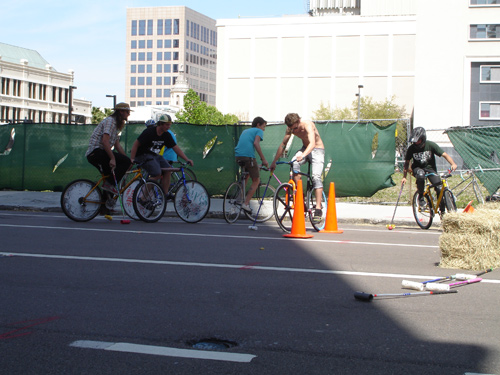 This event is an exciting addition to Florida Bicycle Month, and we’re very happy that the Tampa Downtown Partnership helps get this race brought to us here…downtown is a fantastic place to hold a criterium, and we hope this becomes an annual tradition. In fact, I’ve spent the last few hours trying to convince some friends that we need to field a team for next year’s event. Anyone feel like sponsoring a couple of 35+ has-beens?

The other night, I attended the press conference to announce the 2010 Bicycle Bash by the Bay, southwest Florida’s premier bicycling event. 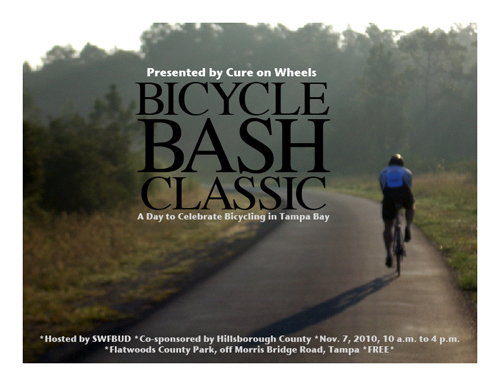 Good stuff is in the works for this year, including a new venue:

The Bicycle Bash, which was previously at St. Petersburg’s Vinoy Park, will take place Nov. 7.

“It’s a really big move for us,” said Alan Snel, director of SWFBUD, the bicycle advocacy group. “It was successful in St. Petersburg, but to take it to the next level we needed to have live bicycle activities with the bicycle exhibitor village.”

More details can be found at the Tampa Tribune online.

Alan was inspired by his trip last year to Sea Otter, and moving the Bash to a location where bike riding can take place during the event is a GREAT move…who knows? Perhaps one day the Bash will rival Sea Otter!

Anyhow, back to the press conference. Here, Alan presents some details to the group: 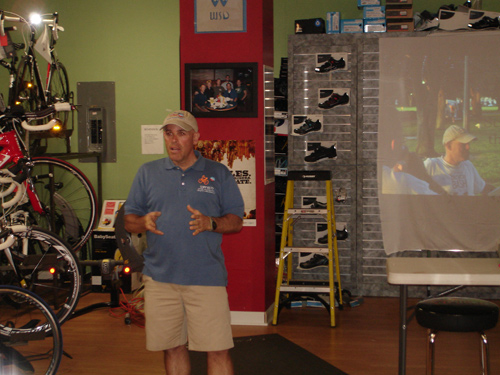 Hillsborough County Commissioner Mark Sharpe spoke to the gathered crowd. Sharpe was instrumental in getting the Bash moved over to our side of the bay and the man is absolutely passionate about finding ways to incorporate alternative transportation (including rail, cycling and walking) into our daily lives here in the Tampa area. Plus, he’s a hell of a nice guy: 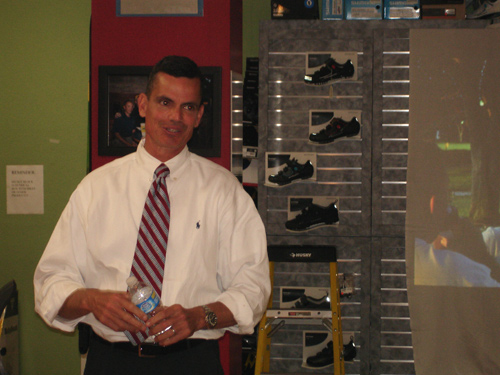 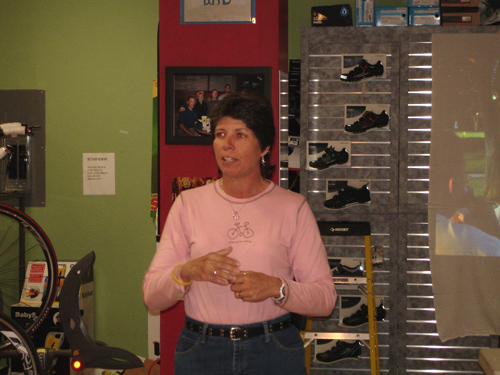 Here are some of the attendees mingling after the formalities…the press conference was held at SWFBUD member store Carrollwood Bicycle Emporium, and they had the place well-stocked with cold beer and yummy snacks for all ages. They make fantastic hosts…and didn’t even mind my child running amok through their showroom. Good folks over there!

Check out our coverage of last year’s Bicycle Bash by clicking here. You can be sure we’ll be at the 2010 edition to provide coverage. We may even sponsor a booth again this year and should have goodies to give away. In any case, I hope those of you in the Tampa Bay area mark your calendars for November 7th, and we’ll see you there!

Last year, I reviewed the Blackburn Flea headlight. At the time, the only charging option was to use the small, portable and clever battery charger. A few weeks ago, I got the matching tail light, which is now sold with an optional USB charger and solar panel. 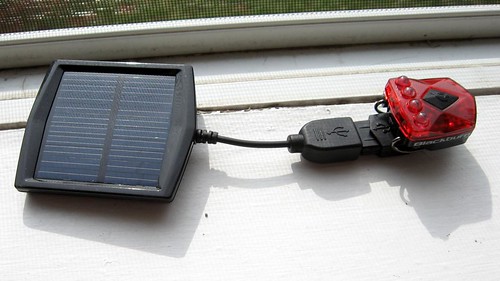 As tail blinkies go, the Flea gets serious points for being a single, sealed unit that’s small, rechargeable, and rugged. I don’t know how many tail lights I’ve lost because they fell apart after hitting a pot-hole. Functionally, the flea is run-of-the mill, however. It has a steady mode, a flashing mode, and a “chase” mode where it alternates from right to left. It’s brighter than most cheapo blinkies — as well it should be for the price, but it lacks the retina-searing dazzle of some other lights in this price range.Â  The USB/Solar option adds a mere $10 to the MSRP of the tail light. For under $40, though, this diminutive blinky packs big gadget factor. The back of the solar panel is branded. 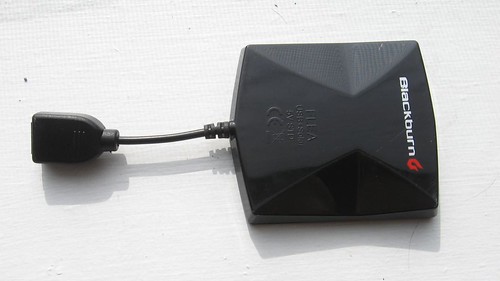 This tail light is supposed to go 6-12 hours depending on mode. I’ve found that after 5 hours on steady mode, the light begins to get dimmer. I haven’t run it all the way down to see how long it’s actually usable.

The USB dongle packs just as small as any of the flash drives you normally carry around, and it includes a keychain eyelet, so you can charge up at the office or at home with ease. The USB charger is compatible with both the headlight and tail light. When plugged into a USB port, it charges the lights much quicker than they’d normally charge from a battery with the old-style charger. My only criticism here is that the lights have to be removed completely from the velcro strap in order to charge via USB, whereas the light fits onto the older battery chargers without removing anything. 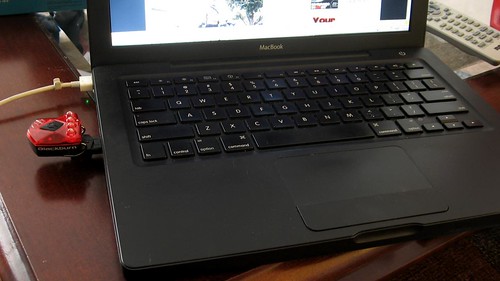 The solar panel provides a USB port. Harnessing the power of the sun to charge up is a nice option for people who go bicycle camping or touring. I’ve found solar charging to be slow-going, taking several hours of bright sun to fully charge the Flea.Â  On a clear day, though, you would have no problems using the solar charger to charge both the headlight and tail light fully.Â  While charging, a frequent, very dim flash can be seen if you look close enough. When done charging via USB (including solar), the flea blinks very brightly every few seconds. 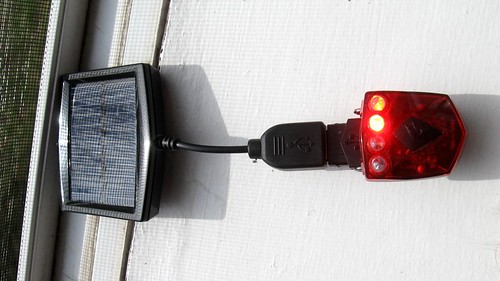 As a quick test, I plugged my phone’s USB charging cable into the solar panel, and it did charge it. Earlier this week, I left the charger in the bright sun for six hours, and it brought my phone up from 1 battery bar to three bars. My guess it it would take more than a day to fully charge a dead phone with this solar panel, but that’s not really what it was designed to do. It’d work in a pinch, though. 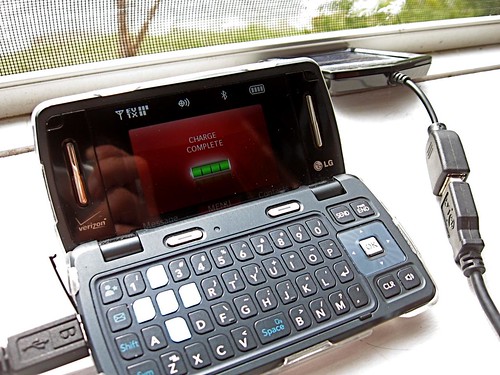 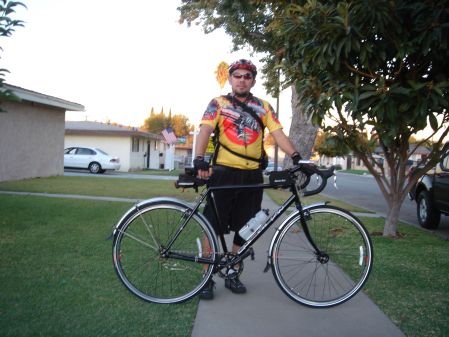 What to wear while riding your bike to work is mostly an individual choice based on weather, style and practicality.

Myself, I like practicality over style. I also tend to be a little “thrifty” on my choice of what to wear during my ride. Living in Southern California, I can get away with riding with shorts and short sleeve jerseys. I prefer mountain biking shorts or knickers over Lycra or jeans. I also like hi-viz cycling jerseys, I prefer the “house brands” (Pricepoint, Nashbar…) because they are cheaper. Here are links of clothing that we have reviewed in the past (including a cooling vest!)

On my next installment I will address hygiene, the #1 reason (in my opinion) why people are reluctant to ride a bike to work.