Just got the word from our friends at Loeka Clothing that they have a new recycling program.

â€œWeâ€™re really excited to announce this program to our customers and retailers. Loeka Clothing doesnâ€™t wear out; but styles change and our riders like to update their wardrobes. This year weâ€™re giving them the opportunity to give back to the community and the environmentâ€?, said Business Owner, Rory Harmse.

Effective immediately, customers will simply register the items to be returned online then mail them back to Loeka, or drop in at a participating dealer to recycle. Customers will receive a voucher for $5 or $10 per item returned for recycling to be used towards any regular priced piece of the Loeka range.

Pedal Chic storeowner in South Carolina, Robin Bylenga, has signed on to collect recycled items on behalf of Loeka and is looking forward to sharing the initiative with customers. â€œLoeka is a well-loved brand in the industry and weâ€™re delighted to help them with this program. We know our customers will love it as it reflects some of cyclingâ€™s core values of looking after ourselves and the environmentâ€?, said Robin. 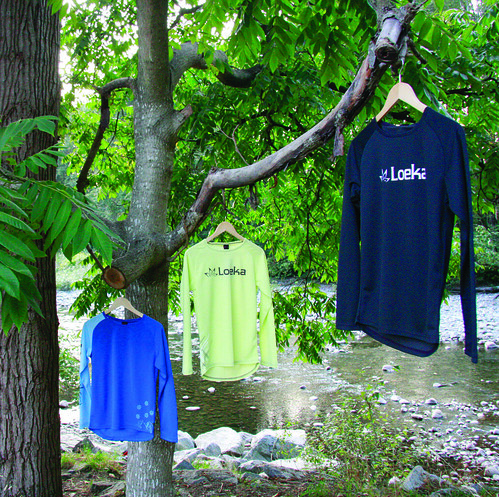 Customers can mail their items back to Loeka, or recycle them at one of the first North American participating dealers:

Ruckus Skis, Boards and Bikes in Prince George BC, www.ruckuspg.ca

Loeka is accepting items that are in good condition, as well as those that have seen the rough side of the trails. Clothing which is still wearable will be donated to the Salvation Army to distribute to its networks. Items that cannot be worn again, will be recycled into Loeka signage, banners and merchandising.

â€œThis is the first step in our long-term plans of establishing a fully sustainable business. Our customers love the outdoors, so we want to do our part to make sure weâ€™re taking care of it for them and the futureâ€?, said Rory.

We are currently working with dealers and distributors to expand the program into other countries once all the details are worked out. Follow us on Facebook.com/LoekaClothing and @loekaclothing to stay up to date with the latest developments.

Customers and potential recycling dealers eager to find out more should visit www.loeka.com for details.

I will be attending and will give you a full rundown…

Read below for a post from our friend, Jonathan Maus @ BikePortland.Org :

Mayor Sam Adams has released details of the fifth annual Transportation Safety Summit which is scheduled for February 8th from 6:00 to 9:00 pm at Marshall High School (3905 SE 91st Ave).

In addition to updates and insights from keynote speakers, there will be two discussion panel sessions on these topics: East Portland Active Transportation Plan, Innovations in Pedestrian/Bicycle Safety, Safe Routes to School; High Crash Corridor Program. Following the panel sessions, there will be a wrap-up speech by Mayor Adams where he’ll outline a series of next steps.

Here’s a blurb from the Mayor’s announcement about what you can expect at the event:

Mark your calendars and plan to be there. This is a great opportunity to learn more about traffic safety in Portland and to let show the Mayor and policymakers what an important issue this is.

If you are in the Portland metro area and would like to attend this event, register here.

Streetfilms recently did some filming in Chicago and I love the resulting video about the joys and ease of winter riding that they put together:

I particularly agree with the comment about bike commuting helping to ease the “winter blahs” (at minute-mark 2:08).

Final note about riding in single digits vs. snow (minute 4:01). Last Friday at 7-degrees on the bone-dry roads I felt warmer than I did yesterday when it hovered close to 30 but stayed damp all day.

Well, whaddya know…only three weeks late with this one. What can we say — we’ve had a lot of stuff to report on!

2010 was a good year for the staff here at Bikecommuters.com. We got to test a lot of great products, we were able to attend a number of wonderful events and we met a few new faces in the bike-commuting community. Let’s take a look back at some of the highlights, shall we?

We got to test a pair of e-bikes in 2010, namely the OHM Cycles Urban XU700 and the Urbana Current. As the e-assist market and its attendant technologies mature, we’re going to see a lot more of these kinds of bikes in the commuting realm. A lot of folks are up in the air about bikes that offer electric assistance, but regardless of how you feel about them, they’re getting folks out of cars and onto two wheels, and these bikes are here to stay.

RL got his hands on the Soma Double Cross DC frameset to test…and it’s fair to say that he LOVES this frame. The frameset won one of our coveted Editor’s Choice awards at Interbike 2010. RL has ridden this bike in every conceivable condition, and it asks for more abuse. Good stuff! 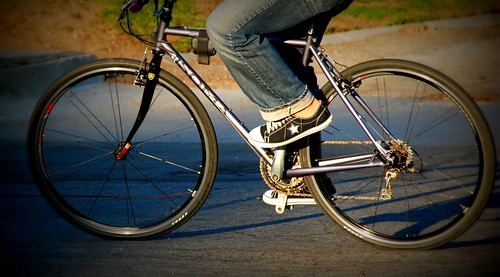 Speaking of Interbike 2010, that was my first trip to the big bike throwdown held in the Nevada desert. “Overwhelming” is the word I’d use if I had only one word to describe the experience. In addition to going to Interbike, I experienced a couple of personal “firsts” with the trip: first visit to the West Coast, first time seeing (and touching) the Pacific Ocean, and the first time I got to meet RL and Moe in person. Yep, you heard that right — while we’ve talked on the phone and emailed each other many times a day, I had never actually met them face-to-face. Needless to say, it was ten times better than I even hoped! We had a blast together and I look forward to traveling with them (and the great staff at our sister site Mtnbikeriders.com — Art, Khoa, Priscilla, Joe and all the others) again in the future. 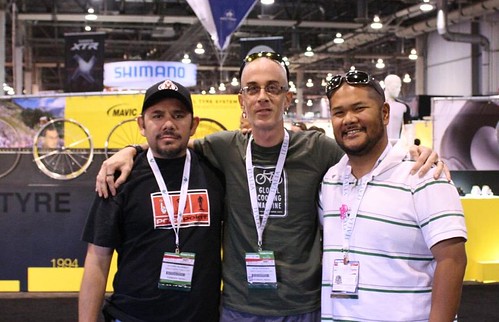 In our recurring commuter profiles, we got to meet Evan, Miriam (Miriam’s going to do some guest articles for us…stay tuned for the hilarity!), Peter, Hilary, Gene, Andrea, and John. Nice to see more women in the mix — you’re woefully underrepresented on too many bike blogs — and happy to learn more tips and tricks from all of our profilees. Thanks again, everyone, for submitting yourselves to the harsh light of Internet celebrity.

We dropped our old Facebook page and started a new “fan page” in 2010…and the thing grew like gangbusters! There’s some exclusive content over there, some interesting discussions and the occasional contest. If you are an FB user and haven’t done so, swing on over to our page and say howdy.

We printed up a run of t-shirts…our first tentative steps towards our goal as a bike-apparel juggernaut…and shirts are still available to order. You too could look like this: 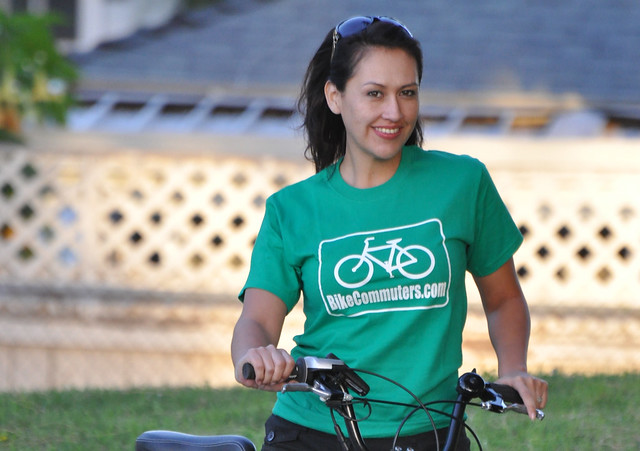 On a final, personal note, I was chosen as one of Ergon USA’s 2011 Ergon Commuter Team — one of 12 North American riders selected out of an applicant pool in the thousands. Thanks Ergon! I’ll be testing and reviewing a number of their commute-friendly products right here and also on our Facebook page.

Thanks for sharing 2010 with us, and we look forward to meeting more of you in 2011 and having some interesting conversations here. As gas prices keep rising, there are going to be a lot more folks ditching their cars and hopping on bicycles, and we should all welcome them with open arms! 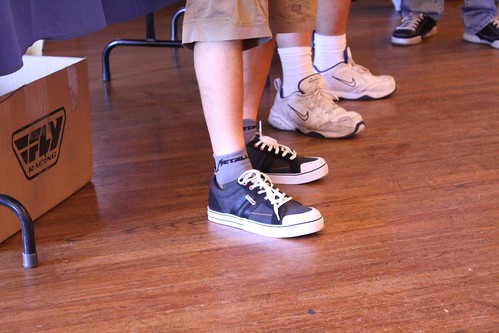 I’m a simple type of guy when it comes to shoes; no fancy Nikes or Reeboks that have gels or springs and cost over 100 bucks. I’m a Vans guy — I’ve been wearing them since high school. Cool thing is, Vans haven’t gone out of style, they are inexpensive and they come in hundreds of styles. So when RL told me that he had some shoes for me to test that have the same style as Vans shoes AND are SPD compatible, I got excited. 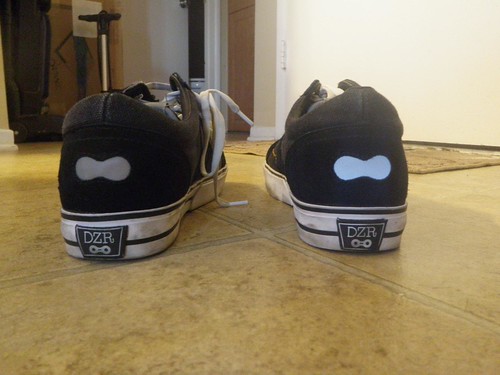 So here they are, these are the DZR GMT-8 Urban Cycling Shoes. Check them out, they are beautiful and simple. The DZR GMT-8 have nifty details such the reflective rear badge, chain link sole and two- tone design. 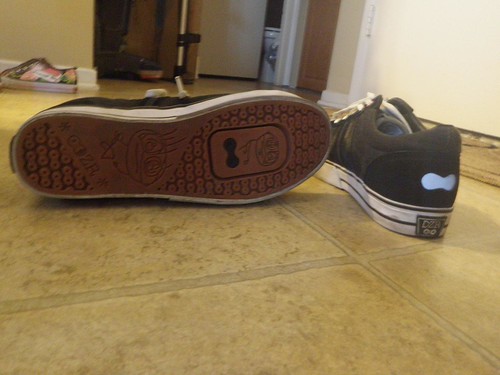 Before I installed the cleats, I wore the shoes for a couple weeks, I wanted to see how comfortable they felt and wanted to break them in. The shoes fit me just right, their width was adequate for my feet and I didn’t feel any funny bumps on the bottom of my feet. These shoes are outright comfortable. 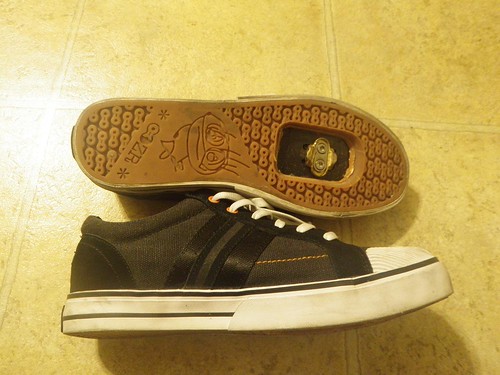 Installing the Cleats was a straight forward process. I simply cut out the plastic cover, screwed in the cleats and I was ready to rock. Notice how the cleat does not protrude at all, this means no click-clack noise that is incredibly annoying when you wear standard road shoes. I was concerned that the comfort level was going to change after I installed the cleats, I’m happy to report that installing the cleats did not change any of the comfort characteristics of this shoes. They are still super comfy.

So how did the DZR GMT-8 perform as a road shoe? Right off the bat I had a few concerns; the long laces, the white toe area and the softness at the top of the shoe. 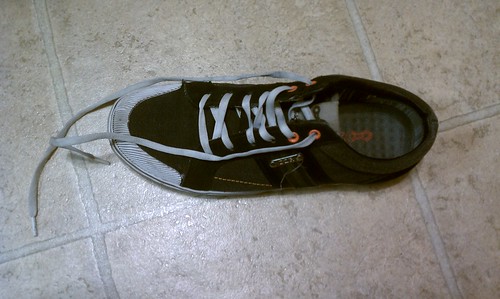 The shoe lace concern proved to be wrong, I never had issues with the laces getting tangled on the crank while pedaling. I did make sure that my shoe laces were quite tight.

The white area of the shoes got quite dirty thanks to all the riding and walking I did in them. If you like your shoes looking like new, you are going to have to clean them often.

The DZR GM-8 shoes provide adequate stiffness on the sole area, you could easily forget that you are riding with cleats. But if you are a roadie or if you use road cycling shoes you will notice something off about the DZR GMT-8 shoes; the shoes lack stiffness on the upper area. Although this makes the DZR GMT-8 shoes quite comfortable, they do sacrifice power transfer while pulling on the pedal stroke. This is not a big deal for non Cat 6 commuters but if you are looking for these shoes to be high performance road shoes, they are not.

What this shoes are, these are awesome shoes for those bike commuters who don’t want to carry extra shoes but must ride with cleats. The shoes look great on and off the bike (just leave your TdF lycra kit at home) and they are very comfortable on and off the bike as well.

With a price point of $85.00, I consider the shoes to be a good value due to their versatility and comfort. I highly recommend them.