Two of our favorite people in the biking world would be Russ Roca and Laura Crawford. Russ was one of our staff writers and in 2009, he and Laura set out on an adventure on two wheels. I had always admired what they have done and figured what they are about to do should be pretty darn fun and exciting. Check out the latest plans from The Path Less Pedaled.

You can read more about it on The Path Less Pedaled.

Editorial by RL Policar: “Recently my cousin Carmelo “Mac” Tolentino was in London and took advantage of the the wonderful London Cycle Hire Scheme.

He was kind enough to document his experience so he can share it with our readership. Check it out!”

I tried the London Cycle Hire Scheme yesterday. I was with my Greek classmate. Prior to this, the scheme is for members only. Just recently they opened it to everyone. Now its available for casual users like me. All you need to have is a chip and pin type debit/credit card. You just go to any of the Barclays Cycle Hire docking stations and there is a ticketing machine. 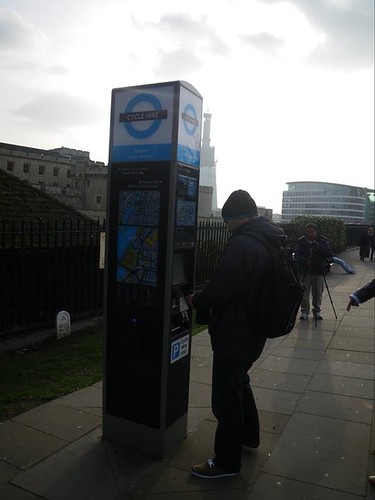 You first need to buy an access. This is done by inserting your card on the machine. It will charge you Â£1 if you choose access for 24 hrs or Â£5 for a weekâ€™s worth of access. I think you can buy access for up to 4 bikes at a time. Once you have purchased the access you can be issued a release code for the bikes. You choose a bike parked in the docking stations and just encode the release code given to you. The light will turn green in the docking point and you can now take the bike. 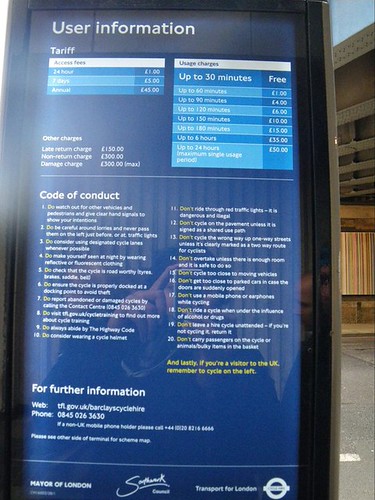 You can now begin cycling. There are rental rates for the bike depending on how long you intend to use it. I took a photo of the tariff rates. Up to 30 minutes is free and up to 1 hr is Â£1 and so on. It will be charged to your debit/credit card. There are hundreds of docking stations scattered all over London and you can return the bike to any of those docking points. If you donâ€™t exceed 30 mins then your journey is free. So basically you only paid Â£1 for the use of the bike. Now when you docked your bike , you have to wait at least 10 minutes before you request for a new release code. 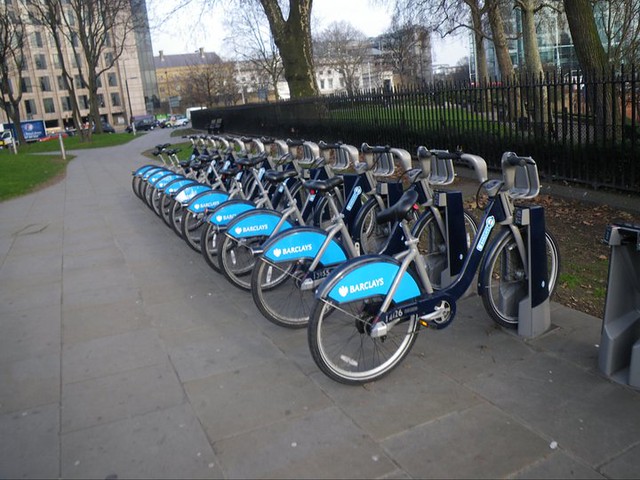 This is quite nice because if want to go around London for sightseeing. You can get a bike then go to whatever place you want to go. Say for example, Trafalgar Square. You can dock your bike and go on do some photo ops. 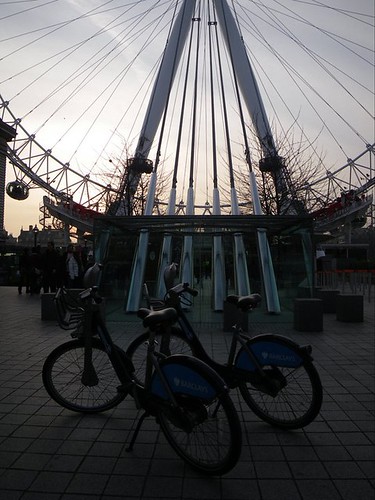 After that you can go back and get a new release code and get a new bike to use for your next destination. As long as you donâ€™t exceed 30 minutes then you donâ€™t get charged at all. So if you manage your trips accordingly you can go around the entire city for just Â£1 and be healthy and eco friendly at the same time. I really loved this experience and I would like to do it every time I visit London (weather permitting). The city is bike friendly so they have designated cycling lanes and drivers are well aware of cyclists. 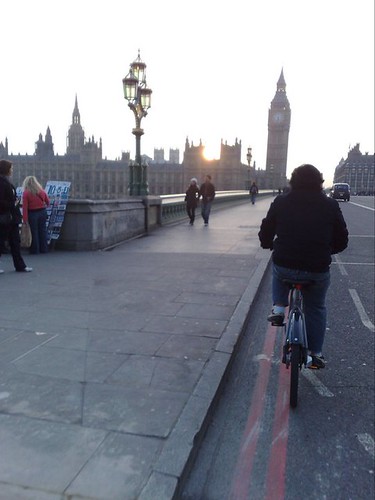 Heres the official link of the cycle hire scheme:

Just in time for spring and being out more (socially) on my bike, I received in the mail a new purse designed specifically for cyclists: 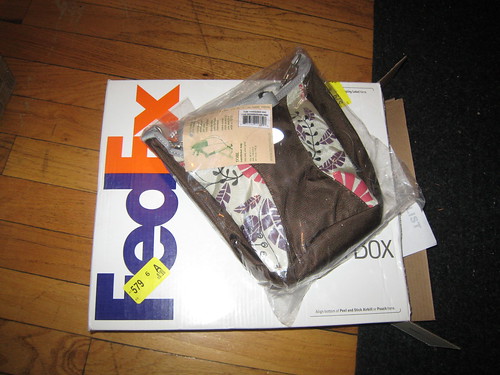 I’ll be reviewing this Detours Tobe handlebar purse and letting you know just how well it handles itself both on and off the bike. 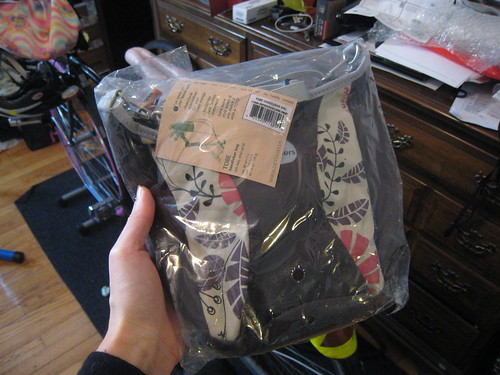 You can see that as packaged it fits in my hand, so it will lend itself to my “go lite” bike trips.

Stay tuned for the complete review.
Please click here to read our review disclaimer as required by the Federal Trade Commission.

Once again – still… – I’ve been dealing with illness — and resulting time off the bike (and off of work). Not too long ago, I posted about being too sick to bike. Then – with a sudden burst of energy and need to be active – I did return to my bike for a mere few days before landing myself in bed for another week of being sick.

I’m happy to report that so far this week I’ve been riding again, but I’ve decided to “go lite” and have changed my cargo set-up. I’m just carrying my seasoned (err – old) trunk bag instead of a pannier that’s just too easy to fill up with stuff and weigh me down. Several years ago, I also stopped using backpacks due to neck and shoulder pain. 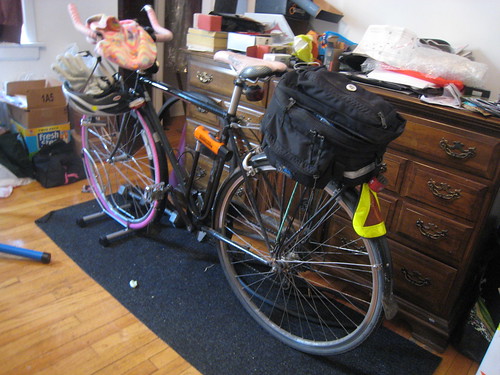 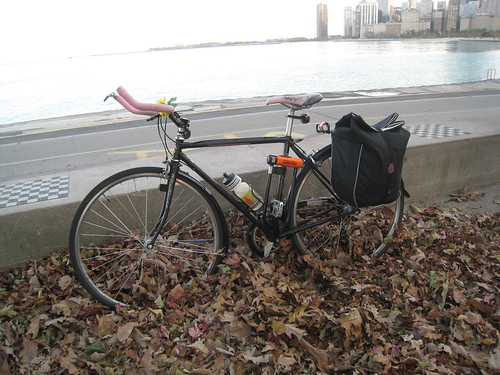 My pannier set-up from just before I got sick – 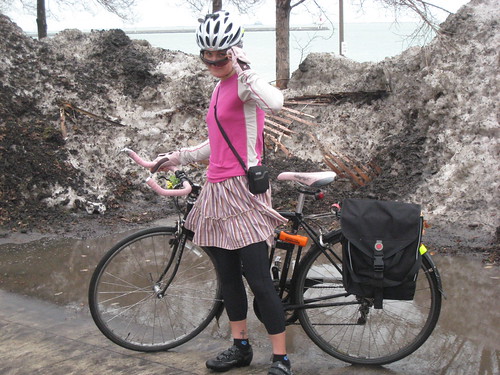 Unfortunately it’s also limited my side-trips on the way home to grab groceries, since I’ve left no room for extras. At this time, I think that’s just as well.. since the last time I reported that I was back on my bike I did end up sick again. No need to overdo it.

Traveling lighter has been a refreshing way to go. I’m considering it a “spring cleaning” of sorts. No extra baggage.

What’s your preferred method of carrying your stuff while biking?

I read about the following ad campaign on friend Alan Snel’s blog:

The Florida Department of Transportation and the University of Florida picked a Tampa firm called Dunn&Co to create a bike and pedestrian safety ad campaign. Dunn&Co called it, “You vs. Vehicle: You lose every time.”

While there may be some truth to that statement, I feel this is NOT the way to capture hearts and minds. The focus certainly doesn’t address motorist behavior — it suggests that the onus is on us, the bike riders and pedestrians, to watch our behavior. Besides, as most of us know, bicycles are considered vehicles under most state and municipal laws, so the statement doesn’t make a lot of sense.

Nor do I care for the ad agency president’s (Troy Dunn) response when Alan “called him to the carpet” on the campaign:

“[Mr. Dunn] said there is no way to change aggressive, dangerous or reckless motorist behavior.”

I’m going to take a wild guess and say that Mr. Dunn isn’t a cyclist or pedestrian on our deadly streets. His comment is misguided, at best.

Florida folks, what do YOU think? Does this campaign sound like something you’re comfortable supporting through your tax dollars? I know it doesn’t for me, but I’d like to hear your thoughts.

And, if you object to the campaign and want to contact the agency behind it, simply send a note to the following email address and let your voice be heard: Troy Dunn dunn@dunn-co.com. You may also consider contacting the Florida Department of Transportation, too.