A year or so. I think I started last June.

It was a total fluke. My brother in law was commuting at the time and recommended it but I wanted to take the bus. I did have a bike so I thought about riding it on days that I missed the bus. I had an old Huffy cruiser that my friend gave me so I used it and found that I liked riding a bike better than taking the bus. 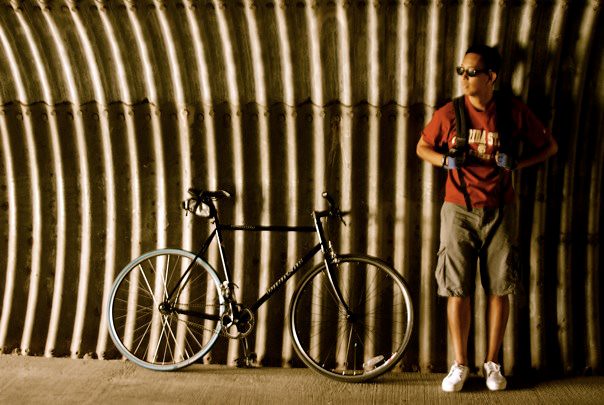 Health wise, I’ve lost weight. I’m pretty skinny so I think it was just fat that I lost. I used to be 170-175 and now I’m 160-165. A total of ten pounds! I’m kind of embarrassed to say that, haha. As far as economics, it was probably cheaper to take the bus at 45 dollars a month for a pass since I went through 12 bikes in a year. As a result of having to go through so many bikes, and learning so much from fixing them, I’ve become the bike guy to all of my friends and pretty much anyone who wants info on bikes since my friends tell their friends to ask me. And anyone who’s close in my circle has either bought a bike or they started riding their old bike. Even my brother started bike commuting at one point but his boss did not like it, sad face.

I am a mentor/part time IT guy and most of my work is in Irvine, Ca. 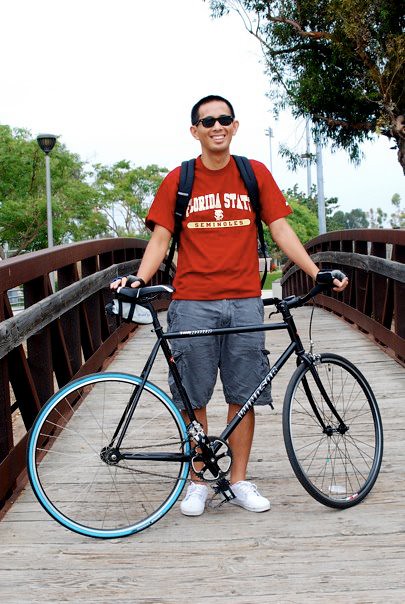 I currently have a Windsor Hour Fixie that’s mostly stock but with Nitto cross bars, Bontrager mtb saddle, a 23mm tire on the back and a 28 on the front. Before that, in the past year, I kid you not, I had in order:

4 Walmart bikes that I kept on returning because something was wrong with them (I know, I know). I was a newbie…

A Raleigh Grand Prix
Diamondback Interval TG
Diamondback Transporter
Diamondback Maravista (Yes I went to a comfort bike…I wanted to be comfortable shut up.)
A Schwinn Circuit with shocks on the front. 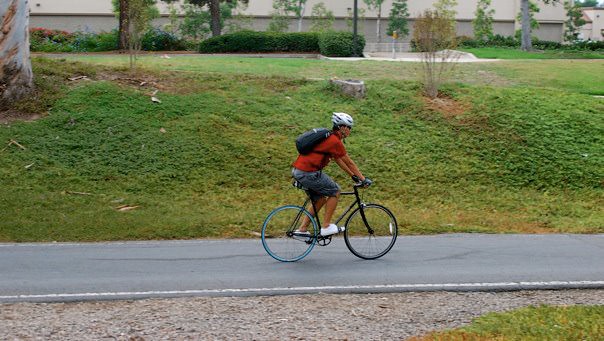 At the start of a massive hill that I never rode on before, my tire’s treads give out and the tube goes through. I obviously had to slow down which I think saved my life since I didn’t know that cars mashed down the multi-lane hill and the bike lane got considerably very small to where I think I would have had a pretty bad wipe out going 30. But instead, I walked for half an hour down the hill.

Active? Probably not. I mean I’m a part of some group that I signed up for at the local Performance store. That’s probably the extent of my advocacy.

I hated fixies before as they reminded me of death, politics and the Celtics but I ride one now! I probably will for the rest of my life unless I move to a hilly area that requires gears. I’m also going to build my first bike–a performance hybrid–in the next few weeks. I need a bike with gears. I want it to have an aluminum frame, 2200 group set, a mountain bike saddle, decent wheels but I won’t spend more than a hundred and probably Cannondale brakes. Wheels and Sprocket sells a pair for 24 dollars including shipping. What else…I like Democrats more than Republicans. I love sushi, the Florida State Seminoles football team and the Miami Dolphins. I also stalk RL Policar occasionally. 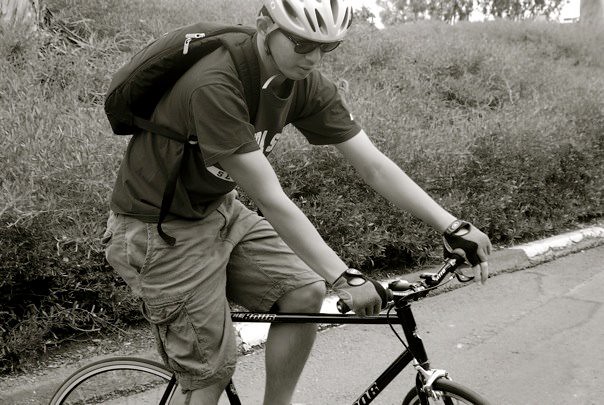 SOOOOOOOOOOOO a friend of mine emailed me this link to an article from a design blog called www.coolhunting.com.Â Â  Funny, the title of their blog conjures images of the highschoolers in trucker hats with red flannel and rifles more than their self proclaimed synonymousness with “with seeking inspiration.” Oops, guess I just have deer on the brain!

Anyway, the article highlights VESPERTINE, a fluorescent hi-viz inspired “chic” clothing company for women cyclists out of NYC.Â  Not gonna lie, I myself have dreamed of a number of staple items in my closet coming in reflective 3M piping and hi-viz yellow on severalÂ  occasions.Â  However, I would never have guessed in a million century rides that someone would actually fabricate them for purchase online in exchange for hundreds of dollars!!!Â  Here’s what VESPERTINE has to say about their flashy selves:

EntirelyÂ  Made in New York Cityâ€™s garment district, Vespertine uses sustainable materials, like our eco-circle 100% recycled polyester, as well as exclusive fabrics sourced from small European mills and beyond. Our highly reflective materials are from 3M and ANSI and EN 471 compliant.

Envisioning urban landscapes illuminated by eye-catching, traffic-stopping duds, Vespertine is convinced that safe is chic and cycling is a revolutionary act which sets good karma spinning. To further this vision and spread our love for the ride, weâ€™ve pledged 1% of our profits to the extraordinary non-profit World Bicycle Relief.

Okay… aye forgibb you for your high priced sexy reflective women’s cycling gear because 1% is donated to World Bicycle Relief.Â  Whaddya say BikeCommuters readers and Cycle Ladies?Â  Ridiculous? or Fashionista Genius?Â  You know my answer, 300 bones for a neon yellow ostrich vest?Â  No thanks, I’ll save that cash moolah for a touring trip, thank you.Â  And on to the photos where supermodels look good in everything:

This does, however, make me inspired to sew reflective piping onto my normal everyday clothes and sit on a concrete seal in a playground… or not. I’ll just buy my crazy spandex from Vamos Threads on etsy.

As many of you know, the crew here at Bikecommuters.com is a huge fan of MonkeyLectric — we were one of the first groups to test the original M132/M133 units, and the folks at MonkeyLectric are super nice and super talented. We had the pleasure of visiting with them at Interbike last year and again just a couple weeks ago…take a look at our coverage from this year’s booth visit.

MonkeyLectric can use your help, though…developing lights like this is an expensive endeavor, and the folks there have set up a Kickstarter page to help gather financial support to bring their newest generation spoke light, the M210 “Mini Monkey”, to market. Take a spin over to their Kickstarter page to get the skinny on their goals and some of the prizes for helping out.

In the meantime, we’ve got our hands on an M210 “Mini Monkey” to try out…I am as giddy as a schoolgirl, because this new generation of light addresses many of the “wish list” items I had regarding the older lights. I cannot WAIT to get the light strapped onto my bike and on the street. Stay tuned for that in the next couple weeks.

I love me some Ergon products and when I saw that they’ll be offering new colors, I just about screamed liked a little girl. 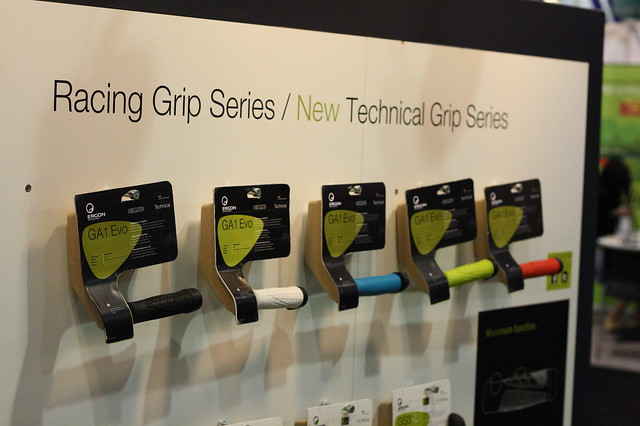 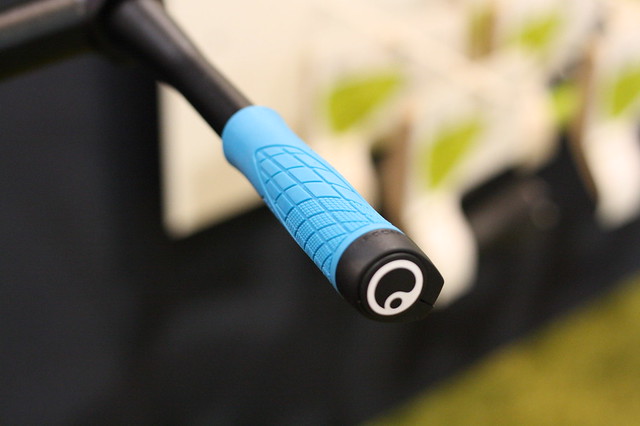 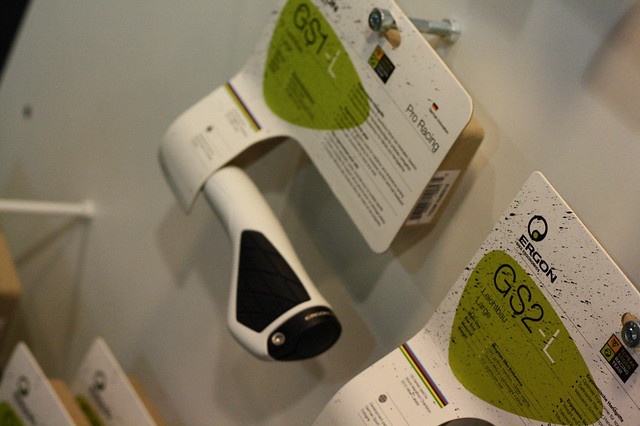 We were contacted by Randy Cardona, an Industrial Design graduate student at the Acadamy of Art University in San Francisco. He was hoping to get a little “focus group” action going on by asking you, our readers, to offer your input on bicycle helmets.

I want to design a helmet that meets the needs of commuters better that what already exists and I would appreciate any ideas/feedback you [and your readers] may have.

To get the ball rolling, I am thinking of a helmet that is weatherproof, breathable and has some kind of retractable goggle/faceshield among other attributes. Another possibility is an accessory that is somehow attached to a normal road helmet or BMX style helmet that does the same thing. Any input regarding things that you do NOT like about existing helmets is equally valuable if not more so.

Randy provided us with a few basic guide questions to get the conversation going:

1. What are the problems, if any, that you have with your current helmet?

2. Does your current helmet meet all of your comfort and safety needs during your commute?

3. In terms of wearing a helmet, is weather an issue? In what way?

4. Does bad weather affect your vision to the degree that you feel less safe during your commute?

5. Do you sweat even in cold weather commutes?

6. Does your head stay cool enough/warm enough in your current setup? Why?

7. During cold weather commutes, where do you find persistently cold spots?

8. Is your helmet comfortable? If not, why?

Please help Randy out by offering your thoughts in the comments below…this sounds like a cool design project and the readers of Bikecommuters.com are the perfect focus group for such an effort! Thanks.