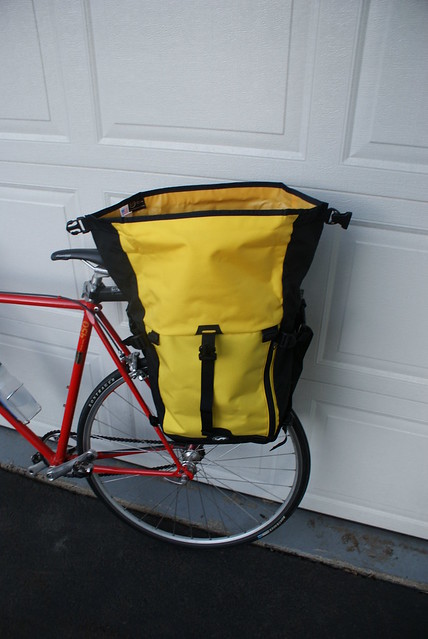 For the past six weeks, I’ve been testing the Velo Transit (VT) Edge 40 backpack, as well as the Metro 20 Pannier. My review of the Edge 40 can be found here.

The Metro Transit is one of VT’s more basic panniers, and retails for $119. However, that doesn’t mean VT didn’t put a lot of thought into this pannier. The mounting hardware – what VT calls “KlickFix” – works extremely well – I tried it on 2 very different racks and didn’t have a problem mounting it to either. Adjustment and attachment are both reliable and intuitive.

Inside, there is one unzippered and one zippered pocket – both mounted to the hard plastic shell that gives the Metro 20 its structure. The rest is all open storage. On the outside, there is one large zip pocket with a vertical zip – however, this is not waterproof, so don’t stick your laptop there on a rainy day!

Like the Edge 40, the waterproof claim is one of the high points of this pannier. Also like the Edge 40, I never got to check it out on my commute during our test period. I did subject the pannier to the same sprinkler test (about half an hour), and it passed with flying colors – no water made it in! I wasn’t surprised though – the top of the Metro 20 is designed very similarly to waterproof bags I’ve used while kayaking and hiking, although it has an extra strap to pull the top back into a nicer shape. 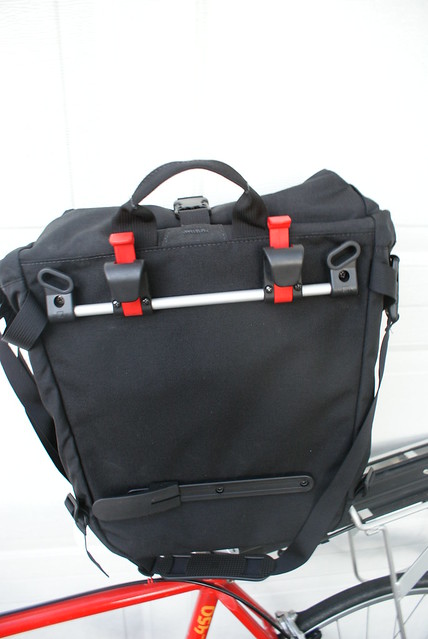 The Metro 20 proved to be a great regular commuting pannier. Although simple, I was able to get everything I normally carry into it – in an organized fashion – without any trouble. The one caveat I’d mention is that it might be on the small side for commuting during colder weather, when I might want to carry bulkier clothing at some point. However, you can always buy 2 (or the smaller Metro 15) if you need extra capacity!

We’ve talked about S24Os before (quick overnight camping trips by bike)…take a look at this story, and also this one by seasoned bike touring experts Russ Roca and Laura Crawford (now of The Path Less Pedaled).

Filmmaker Jesus Beltran sent in a short video he made of a recent trip from Fremont, California to Samuel P. Taylor State Park in the Marin Redwoods…gorgeous scenery, good friends, wonderful touring bikes and fabulous music. Take a look for yourself!

Back to Earth from El Zumpango on Vimeo.

I need to dust off the tourer and get out there for an overnighter of my own one of these days…anyone care to join me?

We’d love to hear about your overnight camping jaunts…just leave your comments below.

We put out the call for commuter profiles…. and Brad responded, sharing with us his “HOT Commuter Bikes“. Thank you, Brad. 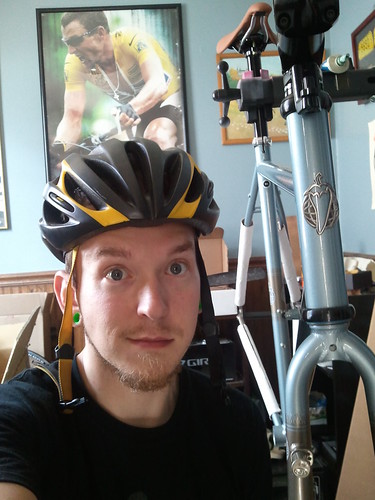 I’ve been a commuter for 5 Years.

I found it fun and it took just as long to get to the same places by bike.
My ride has changed as I moved around, but now my commute is .2 or .3 miles. It’s crazy short, but on a narrow aggressive road.

Biking has helped me get out and pedal almost every day. And I’ve found myself spending more money on nice bike parts and not gas. Unfortunately telling a girl you will pick her up on a tandem is unattractive.

I’m a Freelance Hippie and I bike in Sheboygan, Wisconsin

I currenty have a Fixie with 32/16 ratio. And a single speed cross bike. And I’m currently building a touring bike with gears.
I used to have an old Schwinn mountain bike, that got me started into winter riding. And I used to have a cross bike with gears and I restored a 3 speed cruiser bike. That was a fun project, I miss that bike. I have a soft spot for cruisers. 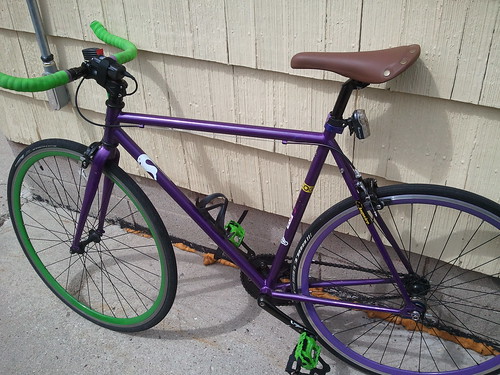 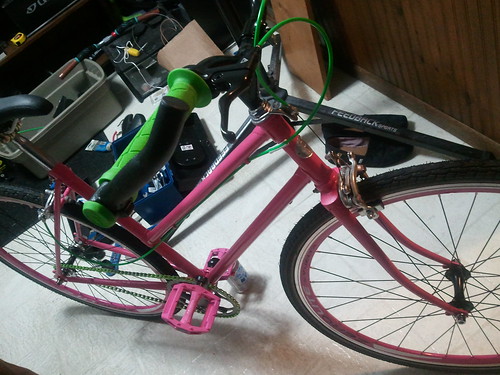 I try to follow the rules while blasting by cars waiting at stop lights. And leading the pack. It’s a good feeling.

What do people (coworkers, friends) say when you tell them that you are a bike commuter?
Co workers are always amused by my dedication to cycling in winter. Lots of blank stares are had at me.

I actually volunteer at what we call the ReBike Program where we take donated and impounded, is that the right word, lost bikes from the sheriff dept and police dept. and build them up for less fortunate people and boys’ and girls’ clubs.

And ask any of my friends, I get really angry when I see people biking at night without any lights or a helmet. and when grown men ride BMX bikes.
Or when people bike on sidewalks or the wrong way in the bike lane. 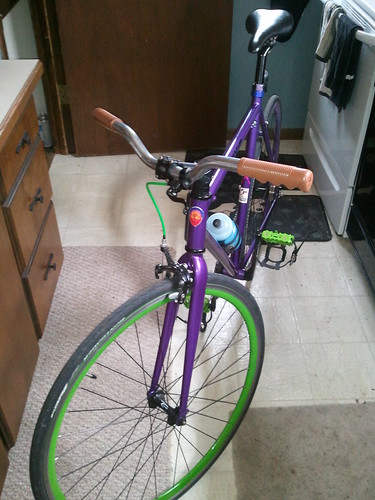 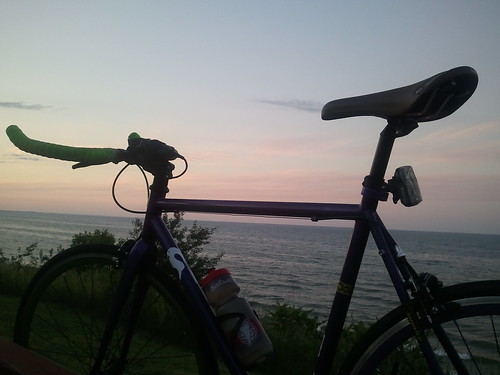 Thanks again, Brad, for sharing your commuting story with us. Brad bikes 365 days a year in Sheboygan, WI. In his first email to us, he described his route as “less than a mile each day but it’s an all narrow busy road so some days it can be very aggressive traffic weaving and there’s some days where I can race and pass up to 3 cars while obeying street laws. Ride hard, ride safe!”

If you would like to be profiled on BikeCommuters.com, just drop us a line anytime (at elizabeth {at} bikecommuters {dot} com) and we’ll send you the details to submit your own bike commuter profile.

Look what arrived at my doorstep Friday morning! 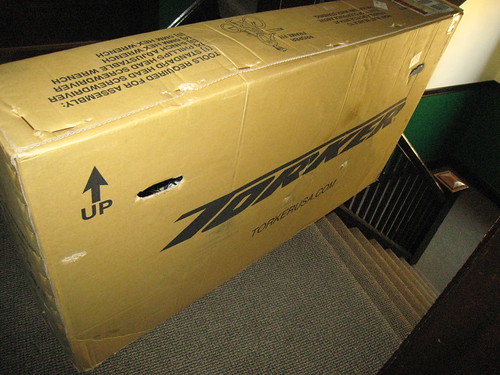 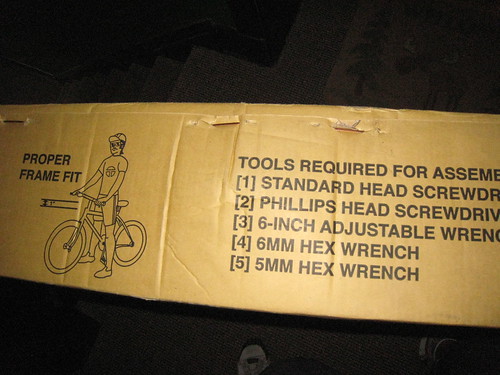 In the aftermath of the theft of my beloved Toro, I really have been without a good around-town bike – complete with fenders and rack – and one that is built for the rigors of getting around the urban jungle of Chicago on two wheels. So, to keep me rolling, I’m now on the job reviewing a bike for our friends at Torker. (Thank you, Torker!)

Stay tuned to see how she looks once unwrapped and in motion. Brownie points to readers who guesses which Torker model I’ll be riding.

We got a press release a few days ago about an upcoming event that should be very enlightening:

Washington, D.C. – July 23, 2012 – Leah Missbach Day, co-founder of World Bicycle Relief, will keynote the first-ever National Women’s Bicycling Summit on September 13, 2012 in Long Beach, California.
Speaking about how the bicycle can inspire both personal and cultural revolutions, Day will set the stage for an event aimed at increasing the number of women who ride bikes and empowering female leadership at all levels of the bicycle movement.

In 2009, women accounted for just 24 percent of all U.S. bike trips. Hosted by the League of American Bicyclists and the Association of Pedestrian and Bicycle Professionals, the National Women’s Bicycling Summit will provide a unique opportunity to network, share best practices and develop action steps to close the gender gap in American bicycling.

“This event will be a powerful opportunity to learn from each other, build a network of female leaders from coast to coast, and work toward a bike future where women don’t account for just 24 percent of bike trips, but are equally represented on the streets and in the movement,” said Carolyn Szczepanski, communications director for the League of American Bicyclists.

The Summit will be held at the Long Beach Convention Center, immediately following the Pro Walk Pro Bike conference, from 2 p.m. to 11:30 p.m. on September 13.

In addition to the keynote address, the Summit will feature six break-out sessions, including media, diversity and car-free families. Speakers will include:

“We’re so delighted to pay homage to Mikael, and the influential place the bike holds right now as a design and fashion darling,” said Melissa Balmer, Editor/Initiative Director for Women On Bikes SoCal. “We hope both the Summit and the fashion show will inspire more women to become active participants in the crucial movement of bicycle advocacy.”

Tickets for the Summit (open to women and men) are $35 and registration is now live. Click here to sign up!

Scholarships are available for women with financial need: For more information, contact Carolyn Szczepanski at carolyn@bikeleague.org.

Visit www.bikeleague.org/conferences/women for additional details and updates. Learn about the Cycle Chic fashion show at www.womenonbikessocal.org.

You may remember that our own Elizabeth Adamczyk attended this year’s National Bike Summit, and also attended the Women In Cycling Forum. It looks like the National Women’s Bicycling Summit will build on some of the topics discussed at that forum back in March.