That’s a quote from a website dedicated to Bicycle helmet statistics. (According to Bandbox LLC’s website the number is 95!)

It’s sad that that number is so high especially when plenty of styles could be worn to make it more fashionable–there are helmets in the style that skateboarders use to helmets designed by companies with roots in extreme sports like snowboarding. 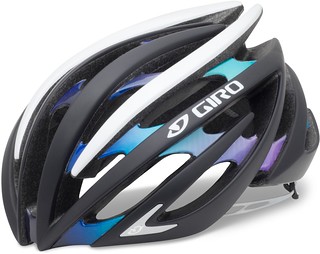 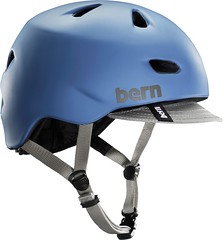 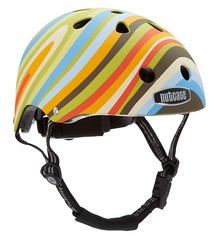 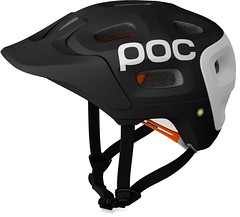 But even with the many options available with, people still ignore the dangers of riding without a helmet all for the sake of avoiding “looking goofy”. 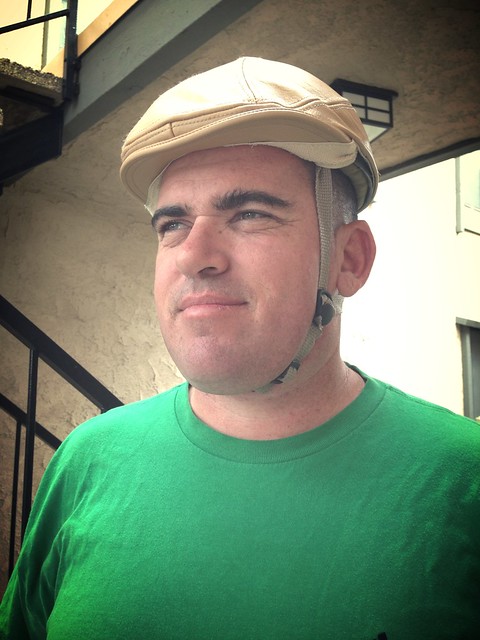 When I first received the helmet, I asked those around me to see what they thought of the helmet. I wondered if people thought it looked more like a helmet or if it passes off as a hat. The result? People couldn’t tell if it was a helmet or if it was a hat. I suppose somebody could argue that the product doesn’t fully meet its goal in that some are not totally fooled but one thing everyone mentioned was that the helmet looked good. 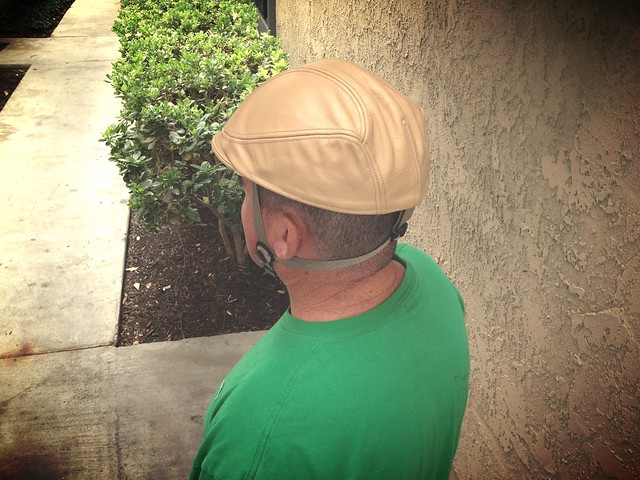 Can I use it everyday?

Because the helmet is not ventilated like performance helmets, getting a sweaty head can be an issue. I personally wouldn’t recommend to commuters that like to go fast or to those that have commutes that are longer than 5 miles. Perhaps I’m being nitpicky but I certainly don’t want to arrive to work being more sweaty than I need to. 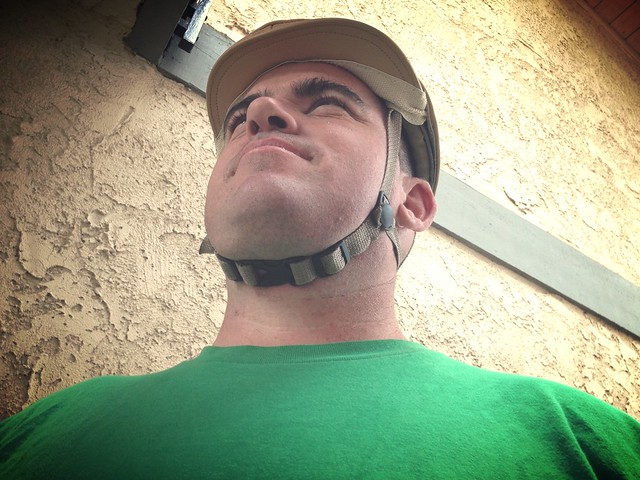 Bottom line?
I think it’s an excellent product. It fills a need in the market for helmets since plenty of people hate the idea of looking stupid or foolish (use whatever adjective you like) in a helmet. We all agree that any cycling death should be prevented especially if it’s something as simple as wearing a “stupid” helmet.

Join us this Sunday from 3:30-5:30pm as we head back out to Santa Ana, Ca. to help out the less fortunate with their bicycles. 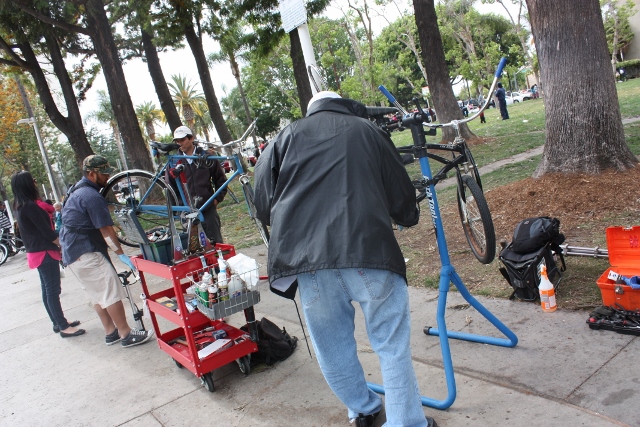 We didn’t send anyone to this year’s Sea Otter, but writers from our sister site Mtnbikeriders.com went and covered a lot of goodies in the mountain-biking world. One of the items our pal Art spotted was Koala Bottle — a magnetic bottle/cage system for bicycles: 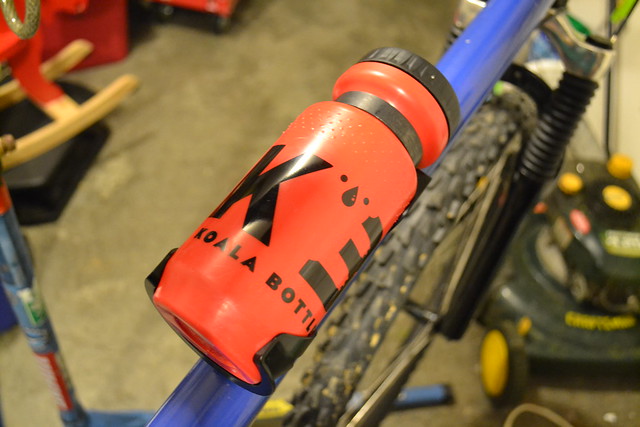 Koala Bottle is The Magnetic Bottle (TM) that attaches to your bicycle, tethers to your aero bars and much more.

Koala Bottle is designed for safety and ease of use! The magnetic ring on the bottle provides 360Â° of contact and is designed so that you can easily drop the bottle into the cage when you are finished drinking. When you hear the ring click and engage the magnets you know that the bottle is firmly attached.

A magnetic bottle, you say? Why, didn’t another company try this a while back? And probably a couple before that? Yes…the concept has been tried before, and while the idea has its merits, most of the previous incarnations were hamstrung by proprietary bottles or other glaring problems. Not so with Koala Bottle — they really seem to have this thing figured out!

First off is Koala’s choice of bottle — the industry-standard Specialized BPA-free bottles with a soft, high-flow valve. They are branded with the Koala logo. No proprietary bottles here — so if you lose it or the bottle becomes uncleanably funky, you can toss it and replace easily (more on that in a bit).

Second is the cage itself — it’s of a fairly minimalist design, with stubby arms to help support the bottle. Up near the top of the cage are two very strong magnets that cling to the steel ring around the bottle itself when the bottle is inserted/dropped into the cage. Koala thoughtfully molded the cage with holes and long slots (and even provides longer-than-usual mounting screws) to fit almost any bike with brazed-on waterbottle mounting points. You can see the magnets and the mounting options in this photo: 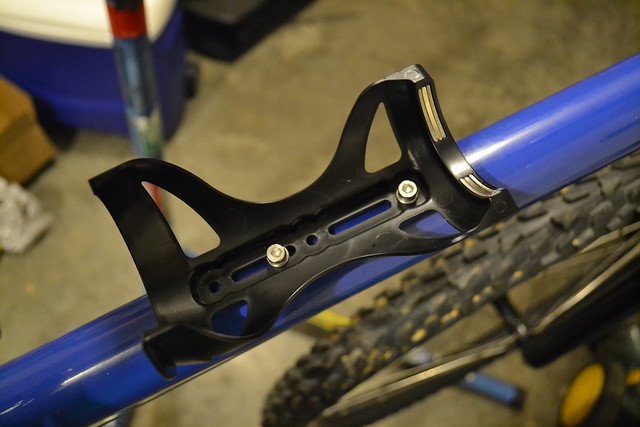 Back to the bottles for a bit — the secret is the steel ring that fits around the neck of the bottle. 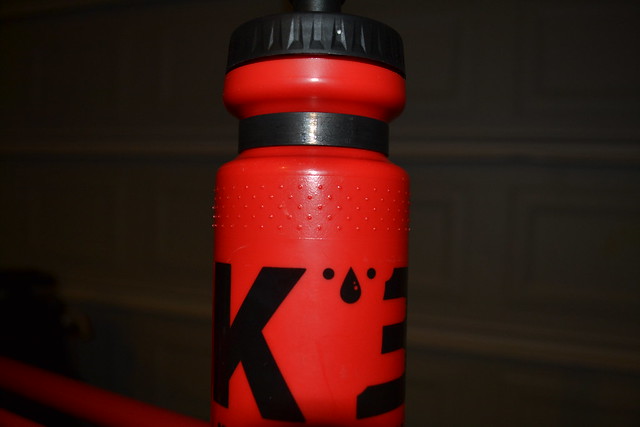 Koala sells replacement rings or complete bottles…or you can install the original one onto any standard Specialized bottle by following these quick steps:

Pretty slick, eh? Those Specialized bottles are everywhere, too — many bike shops and companies who have their own branded waterbottles start with Specialized “blanks”.

For those of you who might be concerned with the retention aspects of the magnetic cage, fear not. I filled up a bottle and rode my mountain bike up and down local stairways, curbs, deeply potholed streets and other urban hazards. The bottle never once shook loose. In fact, the magnets in the cage are so strong that an empty bottle is a bit of a struggle to remove from the cage! When it’s time to replace the bottle in the cage, you don’t even really have to line it up…just get it in the vicinity of the cage and let those powerful magnetic fields do their thing. Snap! This is definitely a benefit when you’re sipping in traffic on your commute; the last thing you want to do is fuss with your bottle.

Why would someone choose such a bottle system? It doesn’t really save weight; the cage comes in somewhere around 55 grams, which is a bit heavier than other plastic cages and similar in weight to typical aluminum/steel cages. Where this system shines is on bikes with limited clearances, like on small frame sizes. Since the bottle can come out of the cage sideways, no clearance above the bottle is needed. This also shines in the offroad world, when frame triangles on suspended frames are too tiny for traditional waterbottles and cage systems.

The Koala bottle is designed and manufactured right here in the U.S., and sells for $27.99 (21 oz size) or two dollars more for the 24 oz. size. Not a bad deal at all. This system definitely has a home on a couple of my bikes — I am sold on the concept!

Here’s one to put smiles on your faces and ease you back into the workweek after a long Memorial Day weekend:

For bicyclist Rudi Saldia, you could say a cat is his co-pilot.

Saldia often buzzes around Philadelphia with his year-old feline Mary Jane perched on his shoulder. Their urban adventures have turned heads on the street and garnered big hits on YouTube.

The 26-year-old bike courier didn’t intend to become Internet-famous. He originally shot footage of the outings only to prove to his mom that he was taking Mary Jane – nicknamed MJ – for a spin.

Read the full article by visiting the AP Mobile page here. And, take a look at this video — MJ seems to be really enjoying herself!

I took my cats to the vet via Xtracycle…once — and they HATED it. This MJ is a pretty special animal, indeed.

Chicago’s annual Bike the Drive event was yesterday, Sunday, May 26, 2013 – when Lake Shore Drive gets shut down to motor vehicle traffic and opened up to bicycles only for 5 hours of open riding. What great traffic — despite the chilly morning air, 20,000+ bicyclists riding over 30-miles of open roads — thank you, Active Trans.

Packet pick-up at the Merchandise Mart in Chicago was run like a well-oiled machine… high tech and ready to serve the thousands of riders who registered.

They even offered on-site registration … including from this overpass on the south section of Lake Shore Drive.

This year I rode southbound first to the Museum of Science and Industry, pausing for a photo opp and people watching before heading back north…. but not before my morning coffee to propel me along the way

Even the bikes took a chance to lay down on the grass before heading back north:

Meanwhile, along the lakefront bike path —

All Chicago fans came out 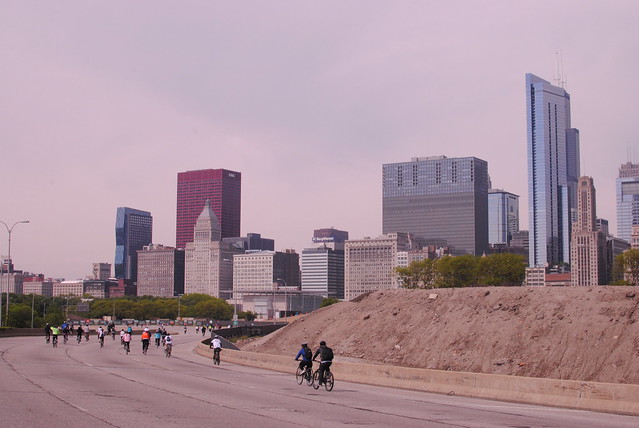 I opted not to ride too far north (since I already traverse the northern section of LSD enough and know the road conditions — ahem, potholes — are worse).

The Director of the Active Transportation Alliance takes a Divvy Bike Share bike for a test ride around the post-ride festival. Chicago’s Bike Share (Divvy) debuted at Bike the Drive.

For me the morning concluded under the “Big Top” tent where several advocacy/non-profit bike organizations and clubs had tables. I worked alongside the folks from Chicago’s online bike network – The Chainlink – and the Chicago Cycling Club; I was there with info about the annual Ride of Silence.

Also under the Big Top:

At the post-ride festival, participants could register to win a folding bike from REI, win prizes or buy a smoothie from Jamba Juice, pick up numerous samples and swag, shop for bike clothing, meet bike clubs and groups, and even climb the rock wall.

To be involved with the festival (setting up a table before and taking down after) gives me a greater appreciation for the scope of Bike the Drive… and any city-wide event wherever you may live that brings together so many folks for a like-minded fun activity. It’s a lot of work… and usually a LOT of fun.

This year’s party has packed up…

Hope you enjoy this year of fun bike activities (big or small).

So many cyclists… so many smiles! Please share your cycling smiles with us here or on Facebook.