I’ve been riding the On-One Fatty fatbike for a few weeks now, and I am ready to share some initial thoughts with you.

I also want to clarify something before we get started. We reached out to Planet X/On-One USA for this bike primarily to test for our sister site Mtnbikeriders.com after our experiences with fatbikes in Las Vegas last September. But, we thought, “why don’t we try this bike out as a commuter, too?” While we’ve long been advocates of the “you don’t need anything special to be a bike commuter” camp, there ARE times when the right tool for the job is something a bit off the beaten path. Fatbikes, as you can imagine, are definitely not a typical everyday commuter choice for the vast majority of us.

As I mentioned in my introduction, there was almost no snow on the ground when the bike was delivered. I didn’t have to wait long, though, as plenty more came only days later…and proceeded to pile up every couple of days thereafter. 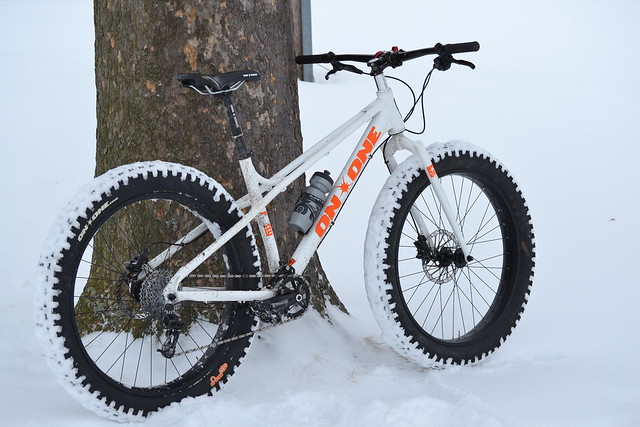 So far, it has been a lot of fun, but there’s also been a bit of a learning curve. Think of fatbikes as an overgrown mountain bike…but one capable of tackling terrain that may leave a regular MTB spinning its wheels. Riding a fatbike in hairy conditions isn’t always as easy as swinging a leg over and pedaling away, though, as I quickly learned. 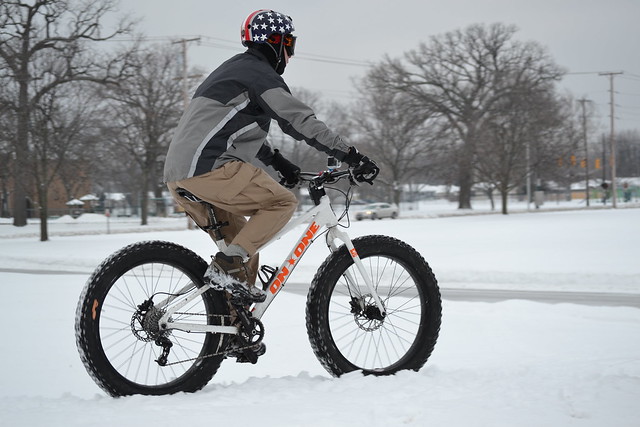 The On-One Fatty features an aluminum frame and a steel fork. I tested the 18″ frame (measured from the center of the bottom bracket to the top of the seat tube), and it fit just right (I’m about 5′ 9″). The frame is constructed with a doubled top tube and a low standover height, crucial for when you’ve got to stop in knee-deep snow. That doubled top tube and the overall construction means the Fatty is stiff from front to back; there was ZERO flex even when horsing this brute around in the white stuff.

The parts spec was fine for my purposes — nothing exotic, and everything worked just the way it was supposed to. Remember that we are testing a 1×10 drivetrain, and the newest version of the Fatty comes with a 2×10 for some extra hillclimbing gearing or bailout range if things get really ugly.

The Fatty did well when the snow was packed down or if it was a bit damp and heavy (snow in near-freezing conditions). It did tend to bog down in fresh, dry powder (well below freezing temps) or if the snow was saturated from melting. I asked my fatbike guru Chris Follmer for advice along the way, and he mentioned that generally, ALL fatbikes exhibit the same preferences for snow conditions. Some of that depends on tire tread and pressure, of course. I would like to try other tire patterns to see if some grip better in dry powder than the stock tires that come with the Fatty. 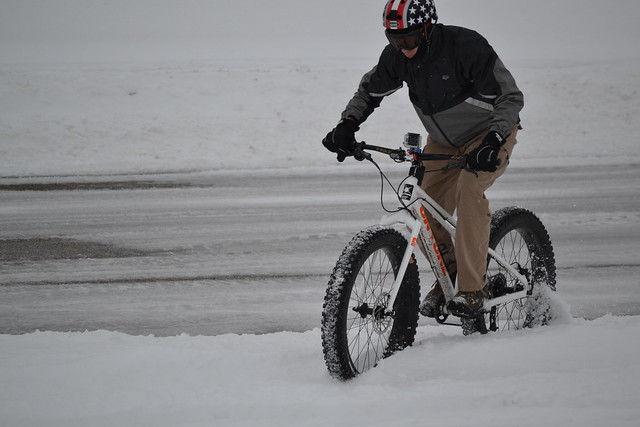 I did play with pressure, though…going as low as 5 psi, but generally hovering right around 7 psi for the best balance of grip and rolling resistance. On slushy roads or soft, muddy ground, the Fatty sings right along. On dry pavement…well, you can imagine that low pressures mean a sluggish ride. On dry days, I cranked the pressure up around 15 psi to see how the ride was — while there was still a good bit of rolling resistance, I was able to knock out an 18 mile trail/road ride in short order and without too much extra effort. Even with the high pressure (relative to most fatbike uses), there’s a lot of natural suspension effect going on with the huge tire volume. Talk about smooth sailing!

Most fatbikes come with wide handlebars…I mean, REALLY W-I-D-E bars. The El Guapo Ancho bars that came on our test Fatty measure 820mm from end to end! Wide bars are needed to help keep the front end from wallowing out in soft conditions, allowing the rider to apply lots of “body english” as needed. Learning to relax my grip on the bars took me a few rides; at first, I was clenching them pretty tightly and wandering all over the place. Once I discovered that I could track better by relaxing, I started doing that…allowing me to stay in tire ruts made by cars, or packed-down areas on the trail.

Riding the Fatty has been like rolling along on a giant BMX bike — it encourages some horseplay and frolicking in the snow! I really enjoyed the solid lockup of the Avid Elixir hydraulic discs (yes, hydraulic — even in below-zero temps)…it made powerslides on ice an easy thing: 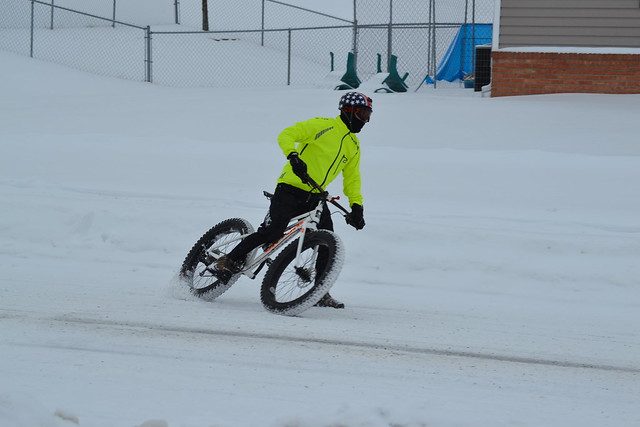 And, like our friend Vince Rodarte told me, “the Fatty is a wheelie monster!” Oh, how right he was…a big, soft tire and low gearing made it a snap to pop serious wheelies: 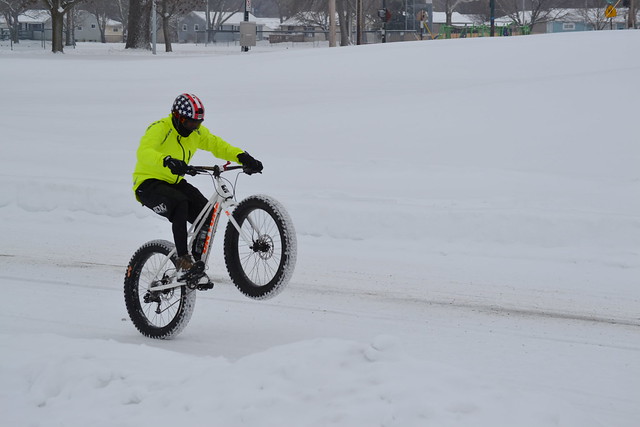 In our formal review in a few weeks, we’ll talk about commuting potential and the particulars of this bike’s running gear. In the meantime, if your commute requires traversing snow, deep sand, mud, or you simply like to take shortcuts over the rough stuff, a fatbike might be just what you’ve been waiting for.

Hey Bike Commuting Ladies and Gents! As you know, the Bike Commuters staff are not about blasting you with Kickstarter bike-related paraphernalia, since gods know that there are fluffy piles of that out there in internet land… like bunnies in a pillow fight, yo. But once in a while, there comes a Kickstarter campaign that tickles our fancy. So we are throwing out some virtual Kickstarter Love for the SHY-SPY GPS/GSM Tracker for Bicycles.

Short of bringing your bike indoors with you on a leash at all times (“What, you’ve heard of guide dogs for the visually impaired? This is my guide bike, and I’m car impaired, okay?“) there comes a time in every bike commuter’s life when they have to address security. Bike theft is a problem in all cities and neighborhoods, despite the cycle-owner’s best efforts. Cycle gators, in an effort to protect their bike offspring, may go so far as to register in free city-wide systems, implant smart locks, or OnStar the hell out of your ride.

So what’s so special about the SHY-SPY? Yet another GPS tracker for your bike… you Cycle Cynics may say, as you virtually (or literally) roll your eyes at this post. Well, let me let them tell you (because copying and pasting is way easier than reading comprehension ;):

When it comes to keeping track of our cycling activity, there are a large variety of choices:

SHY-SPY GSM is our low cost alternative to GPS tracking.

What Mir.I.Am loves about this idea:

Click here for the full SHY-SPY Kickstarter details, non Cycle Cynics and skeptics. Enjoy your week and keep your ride safe, however you can!

This morning I was zipping down a six block descent on my way to work, eyeing a sporty black car that was creeping suspiciouslyÂ down the hill. As a good defensive bicyclist, I slowed my roll, covering the brakes as I gained on the car and an approaching intersection. The light was green; I was headed straight through the intersection and so was the car until it made an unexpected, unsignaled right turn, cutting me off. Luckily, I had slowed significantly and changed my trajectory, turning right alongside the car. Not sure if the driver even noticed me.

I was lucky. Sometimes defensive biking isnâ€™t enough to avoid a collision. 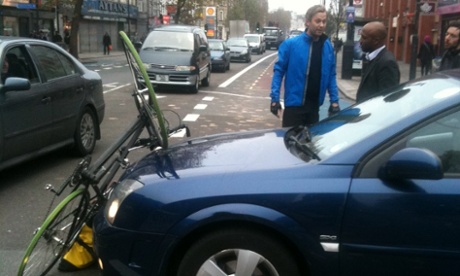 This was not my first near miss, not even the first one of the week, so when a friend told me about the BLAZE Laserlight, my first thought was, â€œI could definitely use a little green bicycle fairy.â€ Because thatâ€™s what the BLAZE light is: a high-powered LED that projects a green bicycle shape onto the roadway about 16 feet in front of a cyclist, warning drivers of an approaching rider. Hopefully, the green bike will alert space-cadet drivers and make cyclists less vulnerable to blind spots and other potential dangers.

It’s true, BLAZE Laserlight is just the newest iteration of an idea thatâ€™s been around for several yearsâ€”check out these laser beam bike buffersâ€”but I have yet to see this concept in action on the street. Maybe it seems like overkill to have little green bikes (or laser beams) announcing a cyclistâ€™s every turn.

On the other hand, maybe laser beams are just the beginning. A group of engineering students at Northeastern have taken bike safety to the extreme, creating the Interactive Bicyclist Accident Prevention System (iBAPS). The â€œsmart bikeâ€ prototype incorporates a plethora of safety features.

Smarter than your average cyclist? The iBAPS features:

Read more about the iBAPS smart bike from the Boston.com.

All these features make my measly helmet & flashing lights seem antiquated. I’m all for bike safety measures and, although some of these seem a bit extreme, to ensure I arrive to my destination unscathed, nothing may be too extreme.

How far would you go to ensure your safety while bike commuting? Is it possible that the iBAPS is missing any features?

Here’s Mir jumping over a hotdog:

Please join us for a slice of virtual birthday cake, and raise a glass to Mir.

Hey Bike Commuters. Do you ever find yourself cruising on your commute to work in the happily-allocated bike lanes, only to end up dodging weird obstacles and moving individuals peppered on scooters, rollerblades, shopping carts, or rolling dumpsters? I know I have… (Honolulu commuters: think Ala Wai canal bike lane towards downtown, knowhadImean?)

Well, in the flat bike-loving city of Amsterdam, it seems a similar battle has begun to unfold: Crotch-rocket scooter commuters are fighting for space in the bike lanes with, well, bicycles! How DARE they, you say? Check out this article from the perspective of a London-based bike commuter that was just released today on The Telegraph, called Battle in the Bike Lanes of Amsterdam.

The author takes a look from both sides: one day, she and her partner rent a souped-up scooter and the next day a Dutch cruiser. Only to realize that it’s every commuter for themselves, lanes and lines be Amsterdamned!

IMHO, there should be enough room for everybody on the streets: cars, bikes, scooters, pedestrians, and public transit. Can’t we all just get along?!