Not too long ago we tested out “The Southwest Waxed Canvas Bike Suit Bag.” Since then, the guys at Two Wheel Gear sent us their updated version of the bag. This time around, they’ve made some changes, mainly in the material they used. Rather than canvas, they went with polyester. Here are some of the main features of the bag:

During our testing period we made sure we used the garment bag with our finest duds. As you can see below, the hanger hooks onto a loop and can be secured so it doesn’t fall (the hanger) during transport. Notice the mesh pockets right above the shoulders of my clothing. Those are great for storing for storing small things like jewelry, deodorant, doodads and just about anything that could fit in there. Further down the bag is a security strap; this is great because it prevents your clothing from moving around and we all know that when clothes move around, the more chances of getting wrinkled.

In addition you have another mesh pocket to store your g-string or if you like going commando and don’t have a need to store underwear, you can put socks in there. Beneath that is a padded pocket to store a laptop, iPad or a slice of pizza (wrapped of course).

What you see below has to be my favorite feature of the bag. It has a reflective pattern that allows you to be seen while riding. Also you’ll notice the two large side pockets, you can put your shoes in there. I don’t know about you, but I like to wear cycling shoes when I’m riding and when I get to my office, I’ll slip on a fresh pair of work-appropriate footwear. The other side pocket can be used to store your lunch or whatever else you need to bring with you to the office. The top pocket is perfect for keeping a multi-tool, pump and snacks.

The bag is equipped with briefcase handles as well as a detachable shoulder strap. Having both options makes it much easier to carry with you. By the way, you can even travel on an airplane with this bag since it meets airline carry-on requirements. 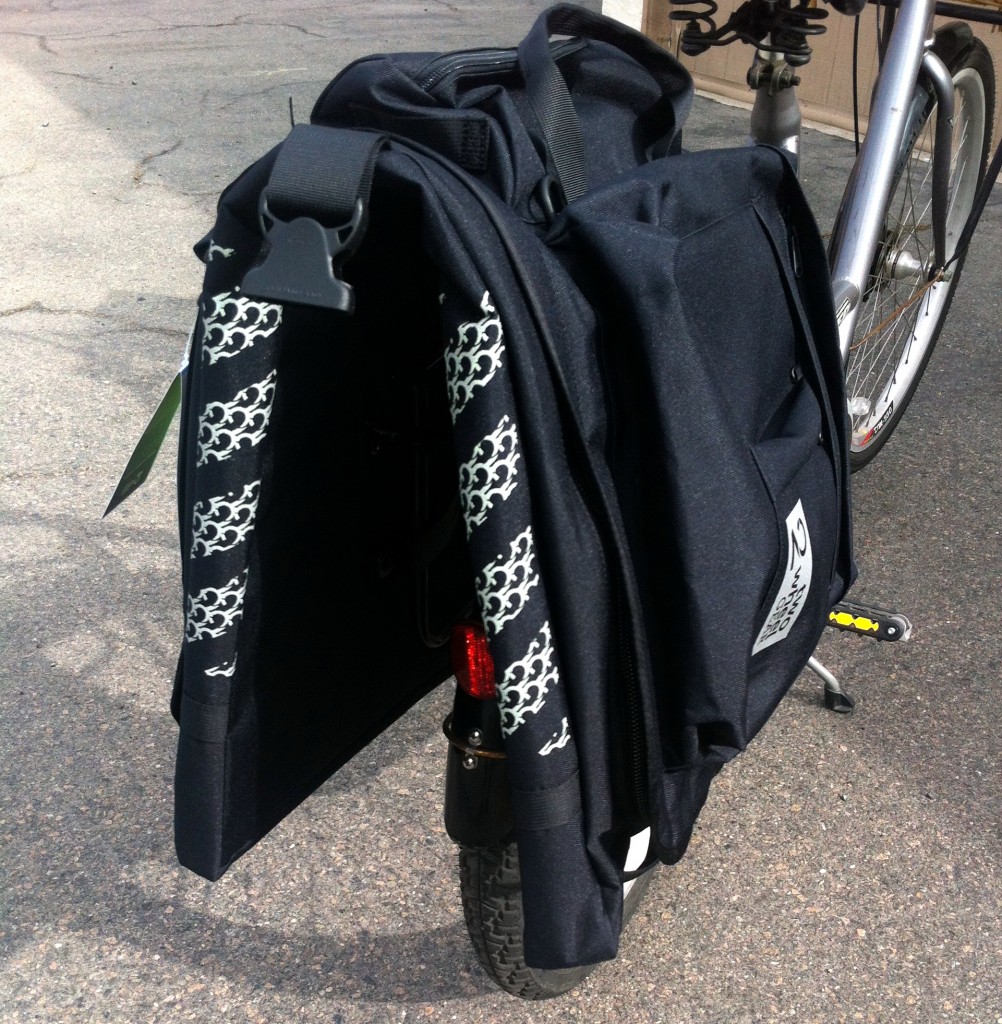 Notice the reflective rain cover that the Garment Pannier comes with. It’s Hi-Vis to help drivers see you on the road during a down pour. I didn’t get an opportunity to test that feature since living in Southern California, we rarely see rain, all thanks to the drought.

The Garment Pannier is equipped with a great locking mechanism that ensures that your bag will not fly off your rack. It uses something calledÂ Universal RIXEN & KAUL Vario mounting system. It’s pretty self explanatory on how it works, but you can read all about it HERE. Please forgive my shoddy photo, I’m still trying to convince the boss to let us upgrade our camera from 1993. But you get an idea on how it mounts from this photo.

Now that you’ve got an clear understanding on how the bag is supposed to work, let’s get into the nitty gritty of the review. I used it for a few hundred miles during our testing phase. I’ve even used it to travel to various trade shows in various parts of the country. One thing that stands out with the Classic 2.0 Pannier is that it really is a versatile and robust bag. Not only is it easy to use, but it’s pretty tough. It must be the 600D polyester they use because this bag has seen some asphalt in its day. There was a few times where I haphazardly mounted the bag without securing it and decided to jump a speed bump or ride off the curb and down went the bag. A few times it slid down the road for about 10 feet. But nothing happened to it! The material was still in great condition, none of the hardware broke, and my stuff in side was still intact.

I think the most appealing part about this bag is it’s looks. Nothing about it screams that you’re a bike commuter. I like how it’s not bulky like other panniers I’ve owned. It’s professional looking and may I add, very handsome. So if you want to look like a boss when you get to work, make sure your clothes don’t look like you just pulled them out of the hamper. No! Arrive looking crisp and fresh. But you can’t do that with just a plain pannier bag. Those other bags will leave your office attire all jacked up and molested looking. The Classic 2.0 Garment Pannier is the way to go. Consider it an investment for your career and if you’re self-employed, I’m sure you could write this bag off somehow.

Not everyone is a great competitor, which means that not everyone wants to be the best when it comes to fun practices such as getting some exercise as they cycle. They simply want to enjoy it or they want to stay fit and in shape. Sure, the true competitors â€“ often professional athletes – want to come out on top and therefore take part for different reasons.

Cycling is a relatively uncomplicated activity. Most of us were introduced to a tricycle as toddlers and to bicycles as soon as we started school. Maybe that is why so many people enjoy it simply to relax and to have fun â€“ individually or in groups.

Some people plan vacations around cycling; someÂ great cycling routesÂ all over the world make for memorable holidays. Who said every break has to be a city trip, or days at the beach, or hours on deck chairs around swimming pools?Â Some celebrities are often spotted around town cycling awayÂ for the fun of itÂ â€“ nothing serious, just relaxing, it seems, as they either cycle by themselves or treat their little ones to a fun ride. Arnold Schwarzenegger, the worldâ€™s most famous â€œtwerkerâ€ Miley Cyrus, Jennifer Aniston and David Byrne of Talking Heads can be seen as they pedal on in a relaxed fashion. Byrne is actually a great advocate for cycling and wrote a book called Bicycle Diaries on the subject. His preferred means of transport to get around the cities he visits is to jump on a bicycle and get moving! 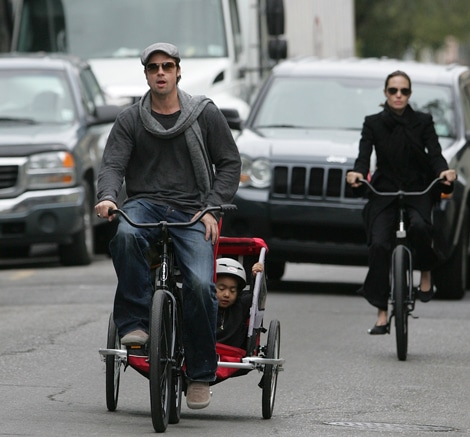 Brad and Angelina (Mr and Mrs Pitt, of course) love taking the kids on a bike stroll when time allows. Naomi Watts also likes to get out, and what better way than to get her hubby and kids to join her on a bike ride, even in a city as busy as New York. Recreation at its best!

Even the President Obama has been spotted out with his family from time to time, and in 2009 his administration doubled spending on walking and cycling initiatives, resulting in more than double the number of cycling trips in America. 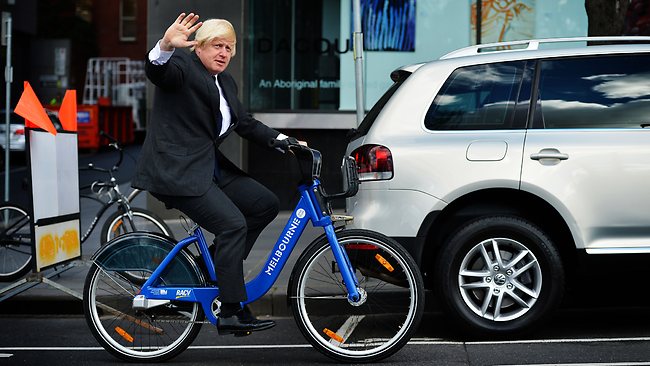 Well-known British politician Boris Johnson (Mayor of London, Member of Parliament) has been in the news for his efforts to encourage Londoners to cycle more, by announcing that 2 new cycle routes would be built soon. It forms part of a huge Â£900m project to see London natives get on their bicycles andÂ start pedaling. Some may be sceptic about these plans initially, but support may grow if it proves to be successful.

While cycling is a fun activity and it a great way to get outdoors, it also helps keep the legs looking good, the butt firm and the cheeks rosy and healthy. Not all celebrities cycle for fun; no, some take this activity quite seriously. Not all of them may have aspirations of becoming top cyclists, but quite a number of them see cycling as a way to stay fit and strong.

It is a well recorded fact thatÂ F1 driver Jenson ButtonÂ stays fit and sharp by cycling often as part of his fitness regime. Because Formula 1 racing demands of the drivers to carry as little weight as possible, cardiovascular exercise is very important, and that is why cycling is a wonderful way of staying lean and strong. To test his fitness, Button uses the 12km Madonna Climb on the Italian border, which is the same climb that someone like Lance Armstrong does to test his own form. Says Button, â€œIt hurts like hell…I love cycling in the mountains…the views are fantastic and it is doing you good.â€

Another F1 driver, Mark Webber, loves cycling and enjoys both road and mountain biking to stay in great shape. He enjoys cycling both as a leisurely activity and a way to stay fit.

Marcin Horecki, former member of the Polish National Alpine Skiing team whose career was cut short because of injury, found a new passion in playing poker. Very competitive by nature, Horecki makes no secret of his fondness forÂ testing himself against others. More recently he added taking part in cycling races to his impressive resume. In his first ever cycling race he finished 900th out of 1,500 competitors â€“ not bad for a maiden effort. 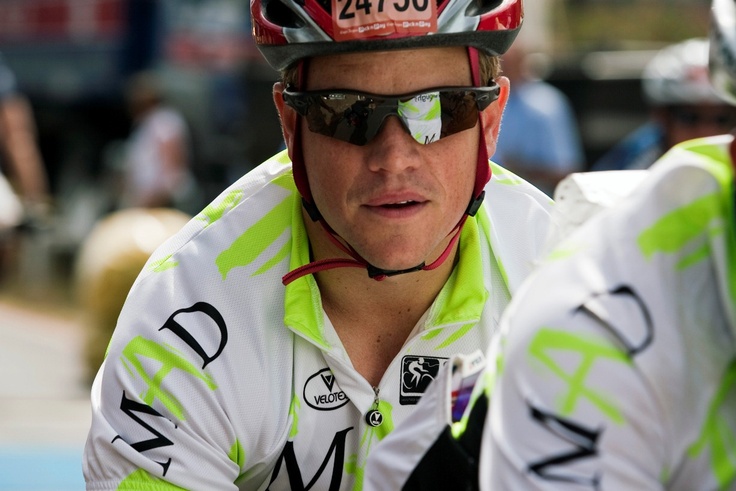 The late Robin Williams who reportedly was a friend of Lance Armstrong and had, at one stage, 60 bikes in his garage! Another actor known for his love of cycling on a more serious level than spinning on his porch, is Matt Damon, who has completed Cape Townâ€™s famous Cape Argus Cycle Tour, the worldâ€™s largest timed cycle race. Other celebrities who have completed this race include Sir Richard Branson and Armstrong himself. 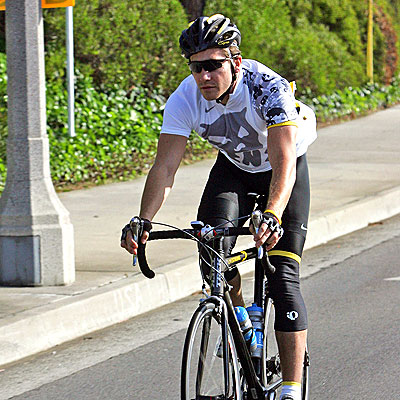 Jake Gyllenhaal of Brokeback Mountain fame is another Hollywood heavyweight who professes to being addicted to fitness, which includes time on a bicycle in both California and New York. Other Hollywood celebrities who love cycling include Patrick Dempsey (Greyâ€™s Anatomy) and Mark-Paul Gosselaar (NYPD Blue, Raising the Bar). The latter is certainly no novice when it comes to the sport. Gosselaar started racing in 2005 and went from category 5 to category 2 in only 2 seasons which is not bad going for an amateur. Dempsey is even more involved; an avid cyclist himself he is on record as cycling more than 100 miles a week.

It seems that cycling is gaining ground everywhere as more and more people are out on the roads – not only those who take it seriously, but also housewives and the Average Joe. Theyâ€™re out there, cycling the streets of their cities and villages, and also the back roads of the countryside. It simply suits so many people and personalities. Whether you want to cycle individually, as a member of a social club, as a family to just get out, or because your competitive nature forces you to do so, it is easy. Just do it!

For the most part I do my bicycle related shopping all online. There are a few exceptions like clothing and helmets, those items I prefer to try on because my body isn’t quite a standard fit. I’ve got short arms, long torso, short inseam and a big head. Good enough visual for you?

When I do shop online, I will check out some of my normal haunting grounds such as Ebay, Amazon and the various online brands like Performance, Nashbar and Pricepoint.l often will search for coupon codes before I start shopping. A good source would be Frugaa.com. This site actually gives me coupon codes for all sorts of online retailers as well as some of the sites I mentioned above.

I know that there’s a big push to shop at a LBS, trust me, I do. I usually will got there to purchase an actual bike or other hard goods such as parts like chains, tires, tubes, lubes and helmets. So in a sense you could say that I’m a hybrid shopper, online and LBS. Would you consider yourself a Hybrid Shopper too or do you stick one or the other?