I hope you enjoyed part one, here is part two of our Holiday Gift guide: 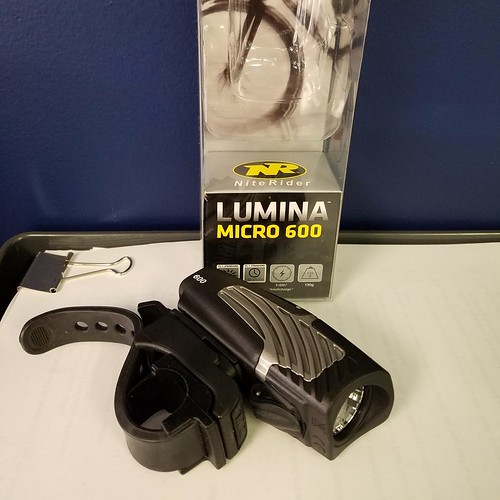 Lights: The NiteRider Lumina 600 and the Sentinel rear light are an excellent combo. The Lumina’s 600 Lumens seem to be the right amount of light for bicycle commuting, not too bright and not a light that you can “outrun”. The Sentinel’s lasers are still cool in my book and are very noticeable at night. Another favorite of ours is the Planet Bike’s Superflash. 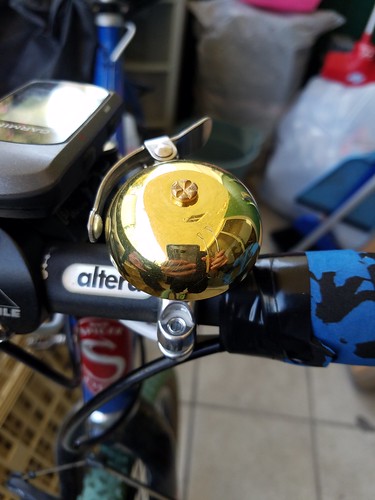 Bells/Horns: We did a small comparo of different bells and horns and the Planet Bike Courtesy Bell was my favorite. The sound, the look and the quality won me over. If you mountain bike, the Timber! Bike bell is worth riding with if your trails are full of hikers and walkers, cool thing about this bells is that you can “turn it off” because it does get annoying. 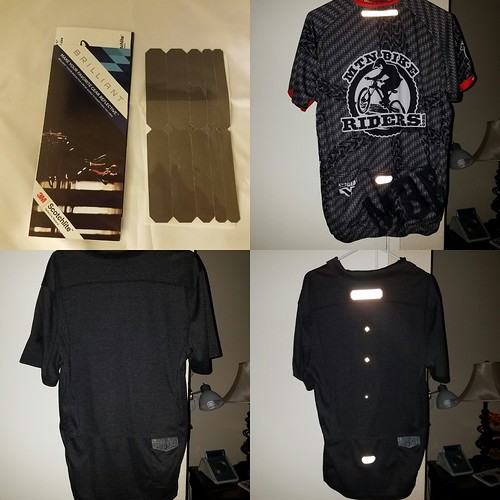 Safety Accessories: I always ride with my RoadID, this little bracelet contains all of my emergency information in case something happens to me, I really hope not to use it at all but “just in case”. Another product that I found online was Brilliant Reflective Iron on strips. I added the strips to shorts, shirts and socks. The strips work as advertised but make sure that you do not put the clothing in a dryer. 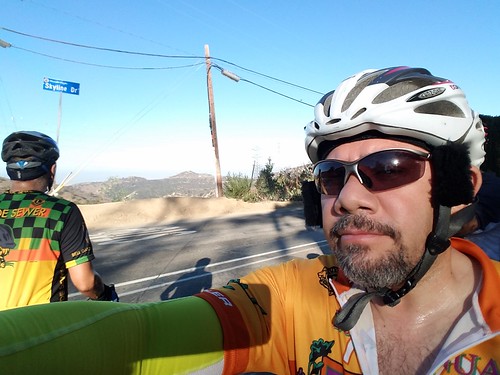 Odds and Ends: Cat-ears, yes, I love those weird pieces of fur. Are they goofy looking? Yes. Do they work? Oh heck yes. Not only do the Cat-ears diminish the wind noise, they also block the cold air preventing your ears from freezing. 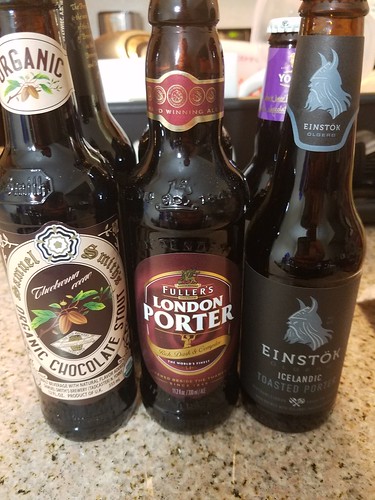 Non biking stuff: Samuel Smith Organic Chocolate Stout beer. Yes, I know you caught me drinking Bud Light but Chocolate Stouts are our beer of choice and Young’s chocolate stout is also a very good one. Not into stouts? How about some Tequila? Don Julio 1942 is my choice of poison.

So now you need to go and buy all this stuff, but where? Support your Local Bike Shop! I have four around me but The Cyclery Bike shop in La Mirada is my LBS of choice. If you are in the Portland Area, River City Bicycles Outlet is the place to go.

Oh and before I forget, we will be launching our own line of bicycles under the Awnry Bikes name, stay tuned!

It seems like everyone is so excited about Christmas that stores were already flooded with trees, ornament and sales…. lots of Christmas Sales… Whatever happened to Thanksgiving? Oh, yeah, it is now called “Black Friday Eve”. 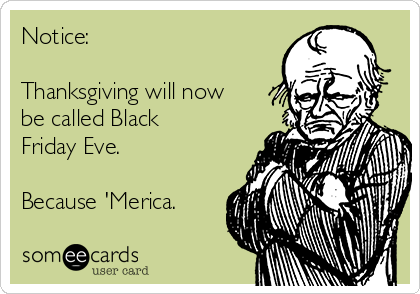 We have decided to bring back our holiday gift guide this year to help you write your yearly list to Santa Claus. Here is part one: 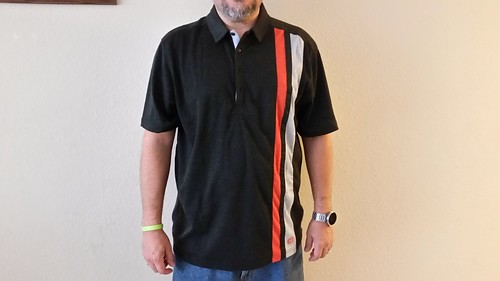 Jerseys: We actually liked jerseys that were not commuter specific such as Tek Gear’s DryTek jerseys which could be found at department stores for less than $12. If you are looking for a bike commuter specific jersey, we liked CHCB wool jerseys

which sell for about $30 at Performance Bike or Amazon. 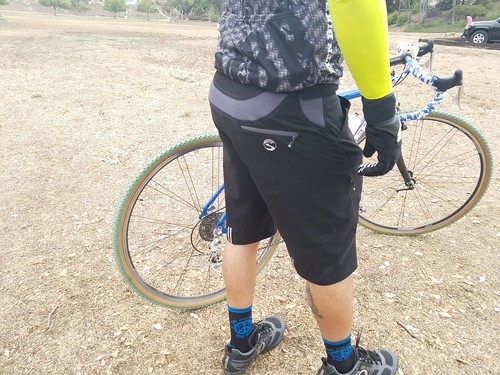 Shorts: My new favorite shorts are the Showers Pass Gravel shorts; not too baggy, not too tight, cool reflective accents. We also liked the Serfas Decline shorts and if you must use roadie shorts; we recommend Sugoi Men’s Evolution Shorts 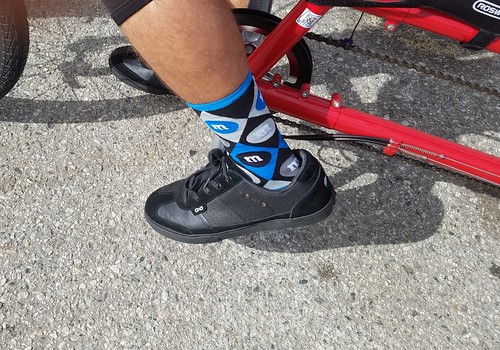 Shoes: It is no secret that DZR shoes have been our favorite bicycle commuting shoes. We got to review the DZR Minna shoes this year and they did not disappoint. Before the DZR shoes arrived, I was wearing Pearl Izumi Men’s X-ALP Seek VI BL Cycling Shoes.

The X-alp are stiffer but they didn’t quite fit with my office attire.

is my choice of vest. The material is thick and it has plenty of reflective material for those night rides. I don’t really ride in the rain, but I have heard good things about the Showers Pass Hi-Vis Torch Jacket, this thing has lights! 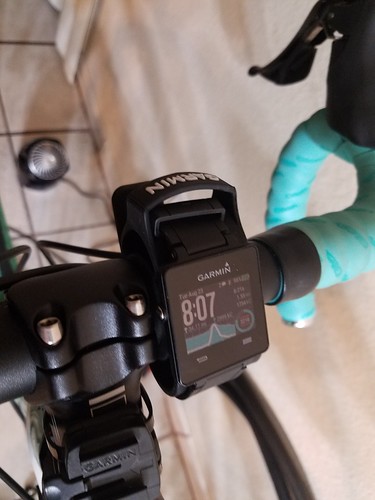 Gadgets: You know I love my gadgets and the Garmin vÃ­voactive

watch tops my list. The watch is a pedometer, cyclocomputer and a smart watch which met all of my cycling needs and more. I you don’t want to spend over $100, we recommend the Moov Now 3D. 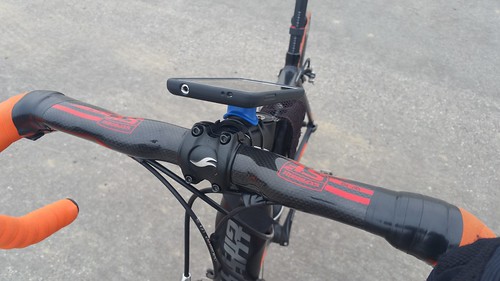 If you are one of those riders who like your smartphone in front of you and on your handlebars, we really liked the Quad Lock mounting system. The mount is very versatile and secure, your phone will not go out flying unless you eat it hard. 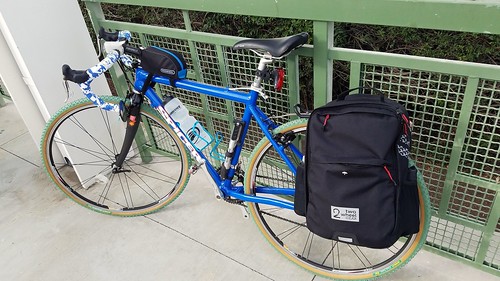 Panniers/Backpacks: I like riding with panniers because backpacks will make my back sweat. But there are times that you need to ride with a backpack, like the time I was riding offroad on my Spicer Cycles Cyclocross bike. Our friends at 2 wheel gear came out with a brilliant product: the Pannier Backpack convertible. This pannier converts into a backpack in seconds and vice-versa, perfect for train-bike commuting. 2 Wheel Gear also sells the garment pannier which is big enough to carry your suit and ties without having the need to iron your stuff when you get to work. An honorable mention goes to the North St. Morrison Backpack pannier, we have not tried this bag but it is proudly made in the USA.

We will be posting part 2 on Wednesday (Black Friday Eve’s eve), stay tuned for part 2!

What a week! I am totally burned out from these elections, we will see what the future holds for cyclists under the new Presidency.

The vitriol between both parties reminded me of two conversations that I had with two of my co-workers regarding cyclists.

My co-workers know that I ride my bike to work and that I am also a mountain biker and a roadie. The first conversation I had was with a male co-worker when he found out that I like to mountain bike at night: 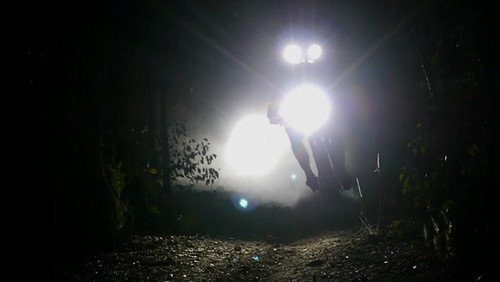 “Last night I had an encounter with some of your brethren, I was driving home and one rider had a light that was powerful enough to almost blind me. Too bad I did not have a front bumper guard on my Jeep or I would have ran them over”

I simply responded “You are willing to commit murder because you were accidentally blinded by a cyclist’s light?” He was baffled by my response, he then went about how some cyclists are assholes and should not be on the road at night. Now, I do agree that some of the lights that we use are quite powerful, 1,000 lumens can easily blind the shit out of you when mounted on a helmet and pointed directly at you. Since I ride with both a handlebar light and a helmet light, I make sure that I keep my helmet light at a low level an only turn it up when I’m riding off road away from vehicular traffic.

Although my co-worker was partly right about being blinded by inconsiderate mountain bikers, it is the fact that he said that he was going to run them over with an anger tone and he actually repeated his statement that he wished he would have run them over. 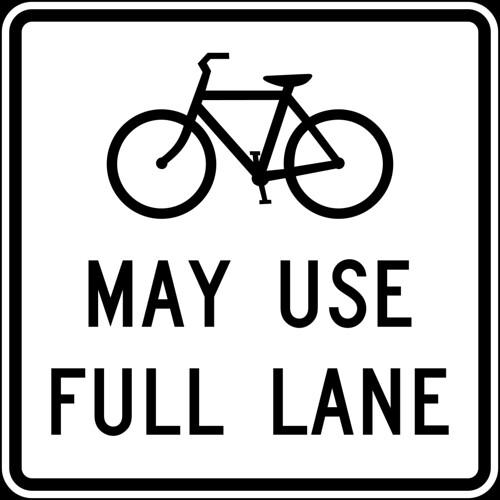 My second conversation was with a female co-worker who happened to see my handlebar mounted mirror. She asked me if I ride on the sidewalk or on the street, I responded that I always ride on the street because sidewalks are not safe. She asked me why is it that some cyclists ride on the middle of the lane instead of a sidewalk, I said, because we are allowed to use the entire lane when it is safe to do so. She then went on to say how she yelled at two cyclists to get “the fuck out of the way” and then proceeded to do the “punishment pass” to teach the cyclists a lesson because they were riding towards the middle of the lane.

I looked at her and asked her if it was worth killing or maiming someone who is a father, mother, son or daughter because she was inconvenienced by 10 seconds. She looked at me puzzled and I guess my statement sunk in.

I think that it is hard for drivers to understand what we go through because they have not been on our shoes (or pedals). My experience as both a bicycle and motorcycle rider has taught me that we are more vulnerable on the road and I give riders and pedestrians the space they need when I drive my car around them.

What is the solution? Education and tolerance. Cyclists, pedestrians, motorcyclists and drivers must be educated on the rules of the road and be more kind to each other.

Hello bike riders, I hope you enjoyed your extra hour of sleep, I know I did. I am excited to share with you that the search for my “winter” bike has come to an end. I shared with you 3 potential candidates on the BikeCommuters.com Facebook page; one folding bike and two single speed bikes.

Candidate #1 was a KHS Flite 200. We reviewed this bike back in 2008 and I doubt that it has changed much. The bike was $50 over my budget so I decided to wait. 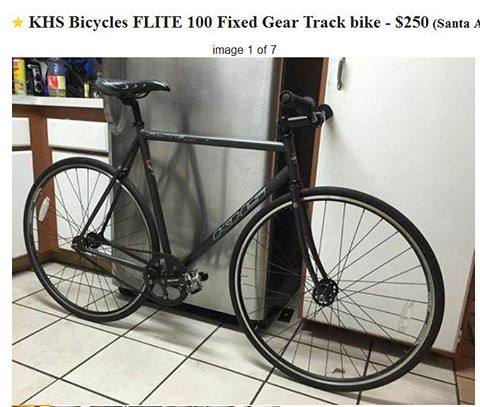 Candidate #2 was an Origami Full suspension folding bike. At $220 was just a tad over my budget but I like this bike a lot. This bike sold right before I contacted the seller. 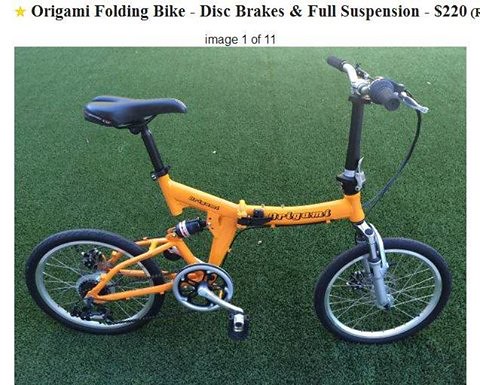 Candidate #3 was a fully decked out State bike. This bike had it all; fenders, baskets, bell and a coaster brake. I am not a fan of coaster brakes so I decided to move on. 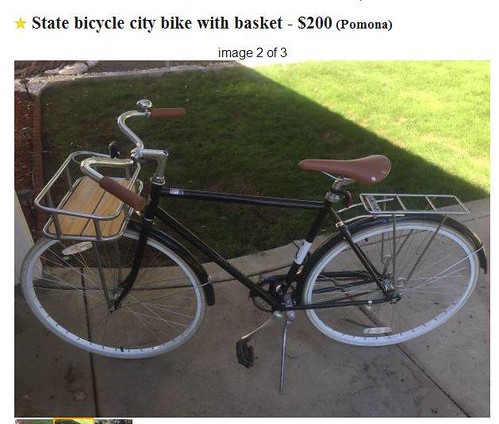 As I kept looking for my winter bike, I stumbled upon an ad that was selling a singlespeed/Fixed gear bike for $100.00. I contacted the seller for more details regarding the brand but he could not tell me what kind of bike it was but the frame was in like new condition. I was intrigued. Since the seller was close to my work, I decided to meet with him to check out the bike. The bike was basically a full blown mutt. Brandless frame, Redline wheels, SDG saddle, raceface seatpost, Shimano exage crankset and brakes, easton stem, ITM handlebar and Crane creek brake levers. Oh, it also had a carbon fiber fork. So yeah, I bought the fucking thing, it had a carbon fiber fork!!! 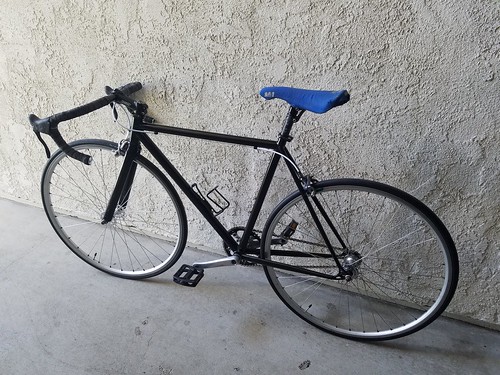 Now, if you saw the pictures of this bike on Instagram or Facebook, you make have noticed that it had stickers on it: 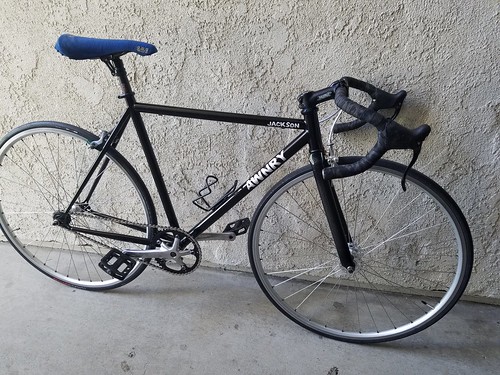 What the hell is an Awnry Jackson? Well, if you have not googled it yet, here is the story from a blog post on MtnBikeRiders.com:

Fullerton, CA, March 29, 2010 â€“(PR.com)â€“ RL Policar and Moises (Moe) Ramirez have launched AWNRY Bikes Nâ€™ Stuff. â€œMoe and I have wanted to do this for a long time.â€ Policar stated. The famous blogging duo originally founded 2 very popular websites, MtnBikeRiders.com and BikeCommuters.com. Ramirez said, â€œWhen we got into the bike media business, the whole idea of becoming our own bicycle brand really intrigued us.â€

Though mountain biking is in the heart of Ramirez and Policar, theyâ€™ve also launched the AWNRY-Jackson. This is the hipster friendly single speed or fixed frame. The Jackson only comes in black. Ramirez stated, â€œonce you go black, you never go back.â€ 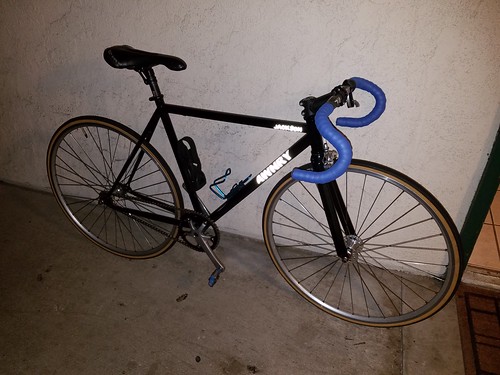 Yes friends, I am living my dream of having my own brand of bikes for $115 (the rear wheel needed a spoke). I also had a bunch of decent parts on my parts bin that I added to the Awnry Jackson: Carbon Fiber ITM handlebars, Paul brake lever, Panasonic Tires from Wabi Bicycles, Selle Italia saddle and Crank brothers pedals. 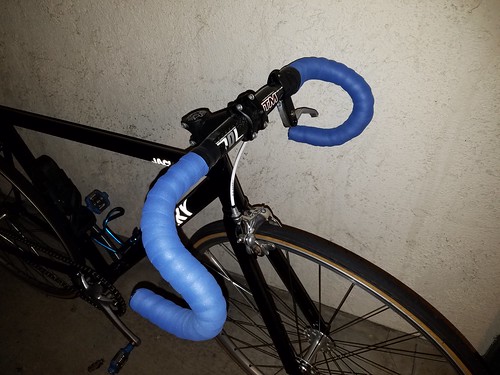 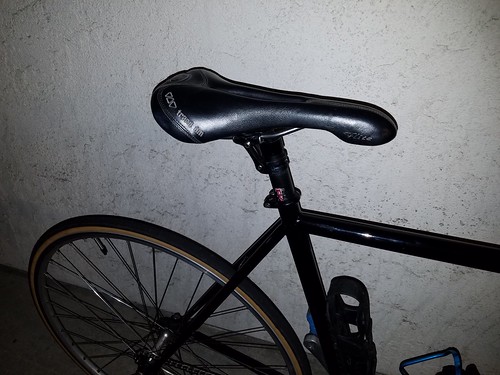 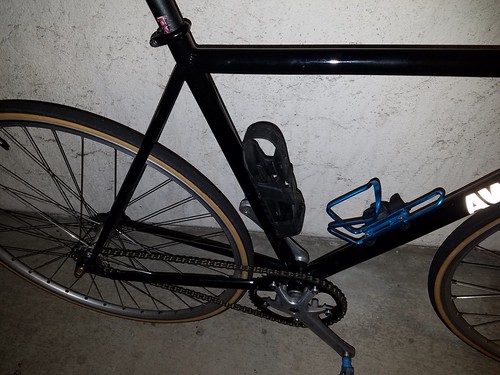 What is next for the Awnry Jackson? Get decent decals made, I suck at cutting them by hand. I will also experiment with more reflective materials since I will be riding this bike a night.