Hello fellow bike commuters, roadies and mountain bikers; I hope y’all had a great Christmas and you got the bikey stuff you wanted. The big dude in the red suit was kind to me and eight Awnry Bike frames and parts are now in the works of being assembled. I am really excited to offer these simple but fun commuter bikes.

So now that I am done with my bikes plug, let us get into what happened at BikeCommuters.com on 2016. 2016 is the year that “The Bike Geek” returned to BikeCommuters and I am so happy that I did return. Although I never stopped cycling, health reasons really motivated me to keep riding but I never thought about riding my bike to work because of the “logistics”. Excuses, excuses… 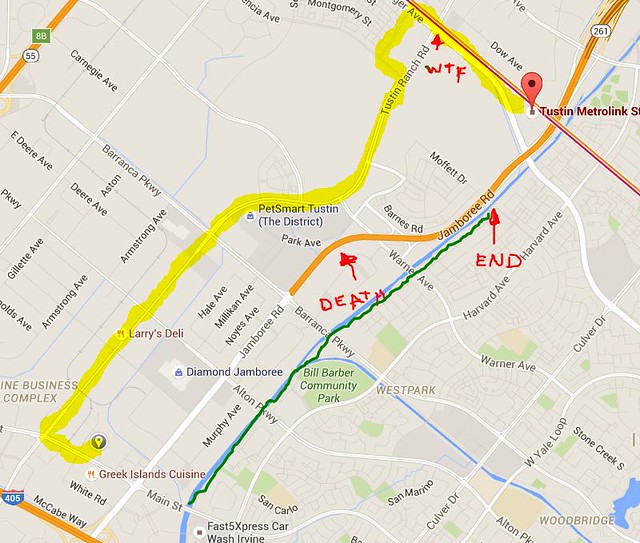 Well, if I was going to be writing for a bicycle commuting blog, it would have been a little hypocritical that I would not be riding my bike to work right? So I did my research and came out with a solution: Bike-Train commute. 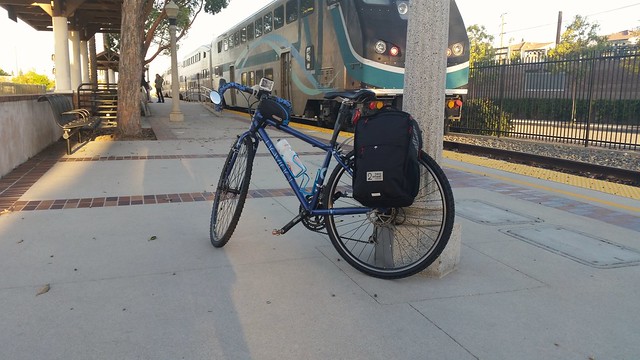 I went ahead and purchased a used Devinci Caribou cyclocross/touring bike for my cycling needs and by pure coincidence, the fine folks from 2wheel gear asked us to review their new backpack pannier convertible which is one of the best products I reviewed for 2016. 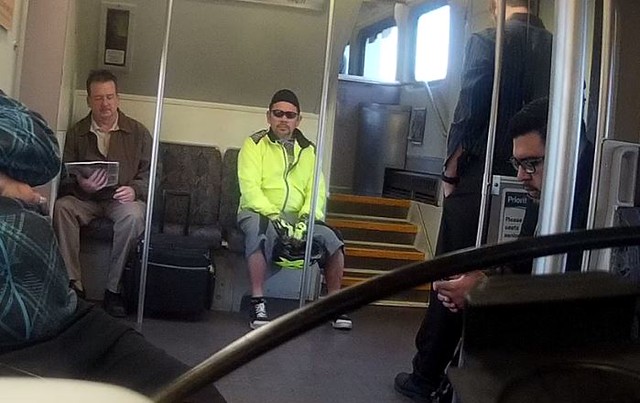 Being new at riding the train had me a little nervous, I did not know about the train bike etiquette and as you may remember, I was a little over dressed for the occasion.

I had forgotten how much fun commuting on bike is and I was also reminded of how many asshole drivers happen to be on the road. I guess things will never change so riding defensively and predictable is the best advise I can give someone who wants to give bike commuting a try. 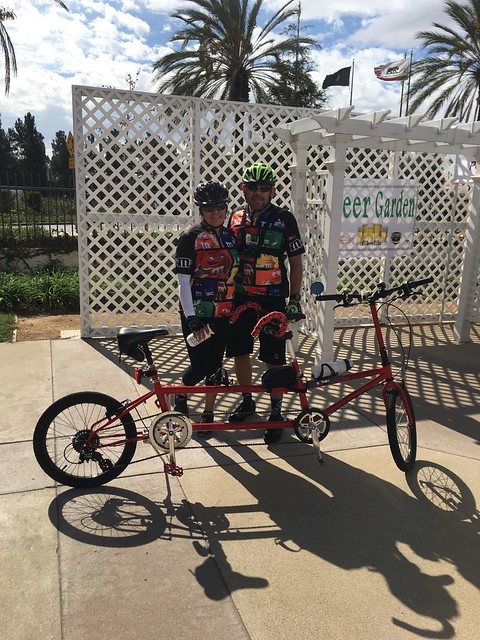 2016 was also the year that I got my wife involved in cycling, if you don’t remember, my wife does not know how to ride a bicycle. The solution was to order a Bike Friday Family tandem so her and I can go riding. The Bike Friday Tandem was the best money I’ve ever spent on a bicycle, my wife and I really enjoy riding together. 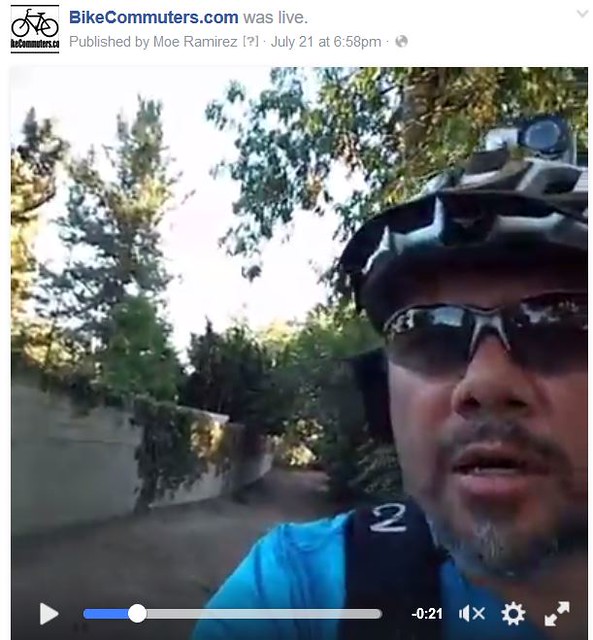 I also got to add a little more excitement to my commute; I sold the Davinci Caribou and got me a rare Spicer Cycles Cyclocross bike for cheap. I was able to ride offroad for part of my commute on my way back home, that was just plain stupid fun. Oh yes, that was also the first time I tried Facebook’s “live” feature. 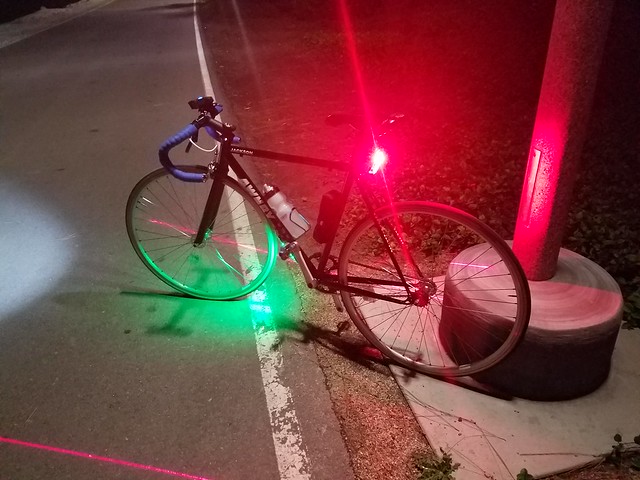 Fast forwarding towards the end of 2016, I also stopped making excuses on riding while is dark and got totally lit with the help of NiteRider and BrightLightz. Commuting at night was a different but pleasant experience that I truly enjoyed.

2017 should be an exciting but busy year with the launch of Awnry Bikes, but I do plan to keep doing my weekly post for all of you to enjoy. I do want to take the time to thank the following companies for letting us showcase and review their stuff:

Hello and welcome back to our weekly Monday post. We are getting close to Christmas and to the end of 2016 so things get wacky since our workload gets lighter and we have lots of time to surf the net for “inspiration”. One of those hair-brained ideas came from RL as he continues his Sabbatical and is still wondering if The Grand Tour is better than Top Gear. He showed me a picture of a scooter that had been “Sticker Bombed” and was considering doing that to one of his scooters.

As you can see, a “sticker bomb” scooter is a basically a scooter that is full of stickers, so yes, an idea came to mind: What if I sticker bomb my Awnry Bikes testing mule? First item of business was to get a shit load of stickers, once the stickers arrived, I enlisted the help of my young daughters to apply them all over the frame. 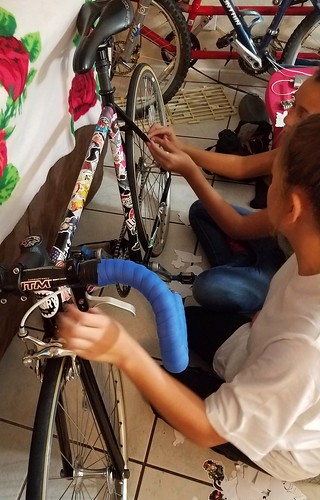 Yes, I had to use child labor but if Apple does it in China, why not me? I mean, I do feed, cloth and drive my darn kids everywhere! Anyhow, here is the result: 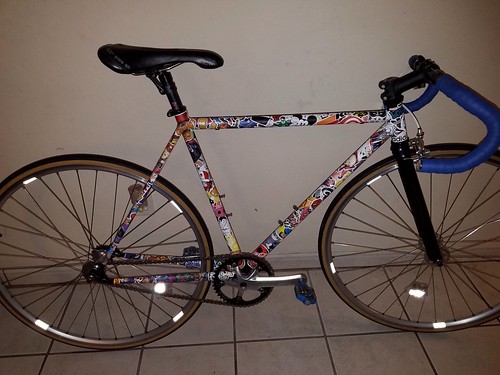 I think it came out rather good! And better yet, my girls really liked it and they would be willing to ride a sticker bomb fixed gear bike! In fact, they shared the picture on their social media accounts and it got a good response. 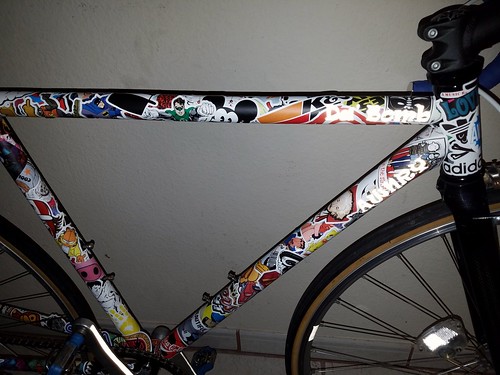 So as I am getting close to launching my own line of simple but fun commuter bikes, I’ve been working on incorporating this sticker bomb scheme into one of the Awnry bikes called the Awnry “Da’ Bomb” (yes, my kids came up with that name). Some of the challenges have been the durability of the stickers and the lack of water resistance but I have gathered a team of skillful engineers to solve that issue. Well, not really, my co-worker is helping me out since he works on different types of decal substrates. 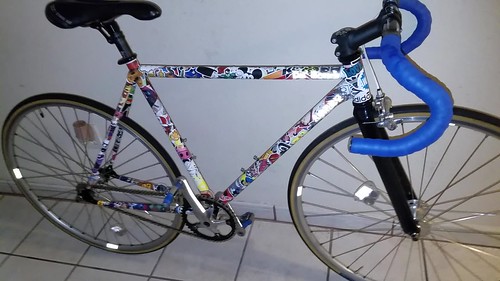 Awnry Bikes is almost ready to launch, the bikes were slightly delayed because of some added features such as anti-theft bolts, flip-flop hubs and brakes needed to be added. We will have the official launch announcement once we are satisfied with the bikes. 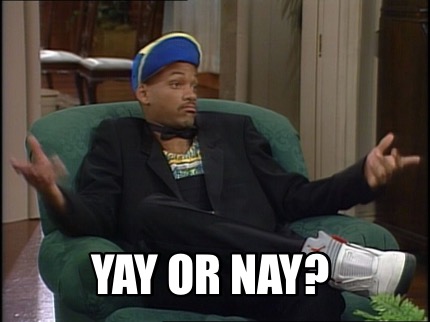 So what do you think about the bike? Yay or Nay?

Hello Bike Commuters, I hope you enjoyed my NiteRider Lumina Micro 600 review from last week. This week’s post is sort of a prequel to last week’s post, I want to share my experience of riding my commuter bike to the train station in the dark. 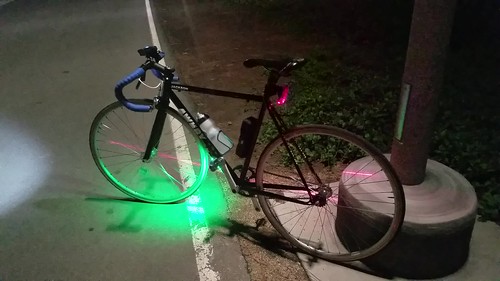 I’ve always been hesitant to ride my bicycle on the streets during darkness and I guess I am not alone because I did not see many bike commuters during my ride. As with most of my bike commutes, I always tend to plan methodically my rides and my equipment. Did I over do it? Maybe a little, but you can’t tell me that I wasn’t visible. 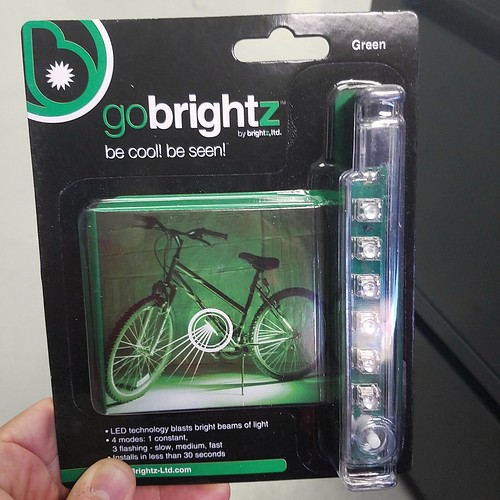 I got a few questions regarding the green light that I installed at the bottom of my bike; this is a Brightz, Ltd. Go Brightz LED Bicycle Light 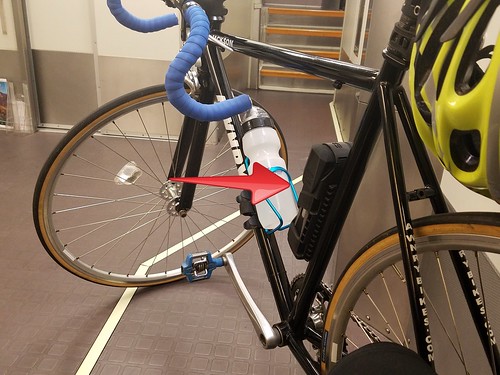 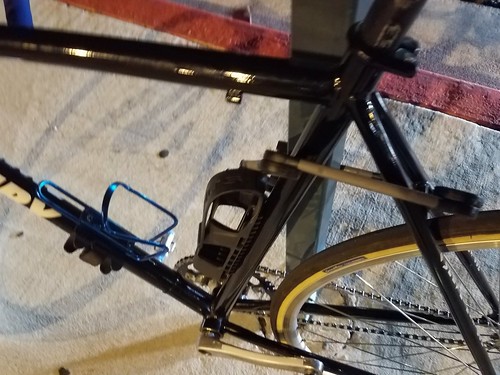 Another question I got was what the hell is that on the downtube? That is the Folding Abus Bordo Folding Lock Granit X 6500 which came in handy because I had to lock up my bike to a post while I retrieved my car from an indoor parking lot (I have a roof rack). 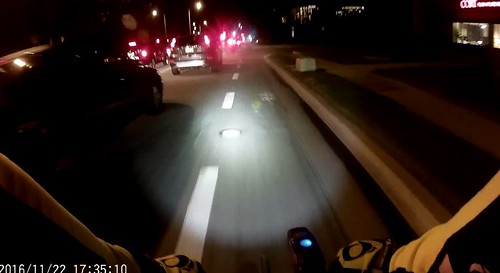 Enough of product placement, how was the ride? My apprehension of riding through the streets turned into excitement; cars actually moved over to their left because they actually saw me coming on their rear view mirrors! The NiteRider Lumina 600 Micro Light

was plenty enough to light my way through the streets and never worried about outrunning it. 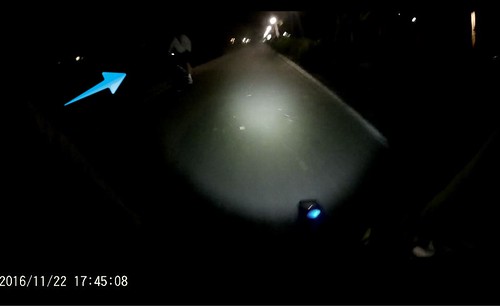 Riding the San Diego Creek is also part of my commute, fortunately Irvine happens to be a very safe city and the bike trail was fully lit. I still recommend using a decent light while riding on the trail, the rider on the left was barely visible in dark areas. 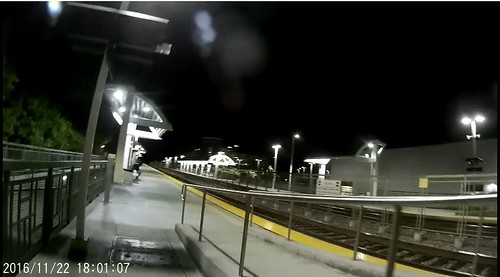 My last concern was the train station, I’ve seen plenty of movies where shit goes crazy at dark, creepy stations. My concern was unfounded; the Tustin Train station is fully lit and I felt safe.

I truly enjoyed bike commuting while is dark and I plan to continue doing it… until it rains.

It may well be a much-loved destination among beach lovers and sun seekers, but Tenerife is also perfect for pedal-power enthusiasts wanting a thigh-burning getaway. Along with its bike-friendly cities, you can also enjoy pleasant temperatures, varying degrees of difficulty, and some stunning landscapes as you pedal your way around this volcanic island.

BikeCommuters.com has previously looked at how Tenerifeâ€™s rugged terrain is well suited to mountain biking. But this time around we are going to concentrate on its superb road network, which has played host to the training camps of several pro cycling teams.

A gentle introduction to Tenerife, this route goes through the islandâ€™s fertile farming area and includes an overall altitude climb of just under 2,000 feet. You should start at Palo Blanco before heading on the TF-326, which will take you to the village of Benijos. Keep going until El Camino de Chasna and then turn left onto the TF-21, which descends down into La Orotava.

Winding its way along the southeast area of Mount Teide, this route contains plenty of turns and is relatively flat but reaches a height of just over 1,640 feet. From Granadilla de Abona, take the TF-28 through the quaint little villages of Chimiche, Arico, and Fasnia. Just after you pass through Guimar, branch left onto the TF-525 towards Arafano and youâ€™ll soon be back where you started.

The Ascent of Teide

Cycling up Mount Teide isnâ€™t easy, but this is perhaps the most obvious route to climb the 8,000 feet to the islandâ€™s highest point. You can take the TF-21 from Puerto de La Cruz straight to the base of the mountain. Along the way, you will bare witness to some stunning sights including pine forests and Teideâ€™s famous lunar-like landscapes. If you need a break, visit the village of Aguamansa before continuing to El Portillo.

Advice for cycling in Tenerife

With its consistently mild climate, you are virtually guaranteed good weather all-year round in Tenerife. But soaring temperatures at the height of summer combined with increased traffic on the twisty mountain roads will test even the most accomplished and adept cyclistÂ to set foot on the island.

While the roads of Tenerife cater for all abilities, some prior experience is recommended if you want to ride the mountains. Donâ€™t forget that the weather in the mountains can change quickly too, so remember to take the following:

There is no reason why you canâ€™t explore Tenerife on your own or with a group of friends, but if you want a little more reassurance, there are plenty of tour operators that can provide everything from bike hire to guided tours and even seminars on how to cycle like a pro. 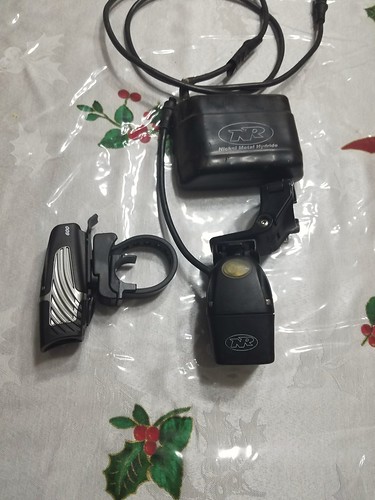 Bicycle lights have come a long way, they are smaller, more powerful and less expensive. I own a NiteRider FireStorm HID light which weighs about 800 grams, produces about 400 lumens and used to sell for over $300. 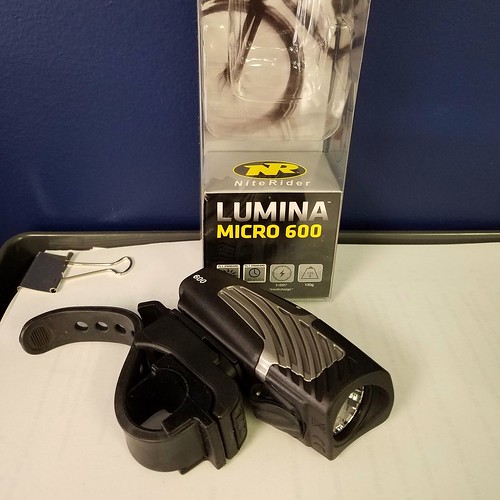 We now have plenty of choices for lights that produce over 400 lumens for less than $100. I selected the NiteRider Lumina Micro 600 because I think that 600 lumens would be enough for riding on the streets and off-road. I also chose the Lumina Micro 600 for its price point; $64.99 is affordable for a 600 lumen light. 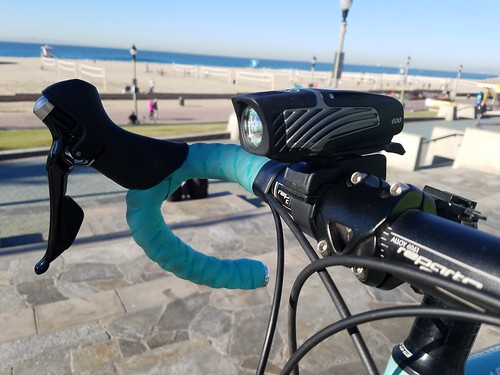 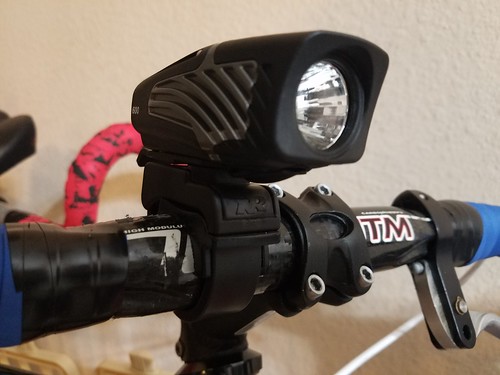 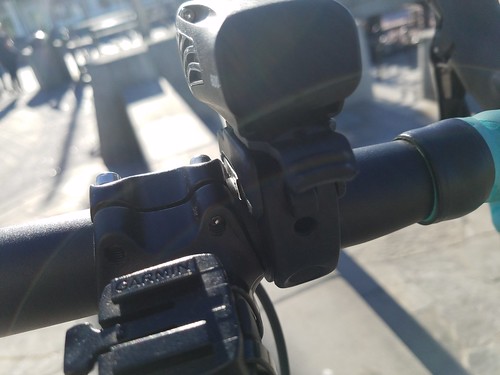 My favorite feature of the light is how versatile it is, the flashing mode is bright enough to be seen during daylight, the high output mode is perfect for riding off-road and dark commutes. The 300 Lumen mode is great for riding on busy lit trails so you won’t blind incoming cyclists/walkers and it also doubles the run time. 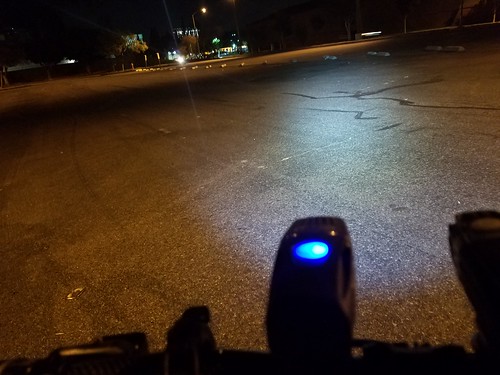 The light beam is round with a slight bluish tint, this limits the amount of “glare” you get during those foggy nights. The Lumina Micro 600 is very compact, light and the mounting strap fits nicely on all of my oversized handlebars. There was no flickering while riding on bumpy terrain and I never ran out of juice even running at full blast for over an hour and twenty minutes. Charging took about 2 hours using my USB charger so I had plenty of time to recharge the light during work hours. 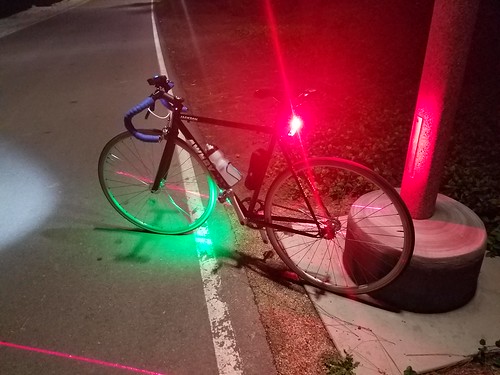 I don’t have anything negative to report about this light, I really love it and it pairs perfectly with the NiteRider Sentinel. For more information about the NiteRider Lumina Micro 600 or to purchase this light, check out NiteRider’s website at https://www.niterider.com/

Here is a video of me riding with the light: