Hello fellow bike commuters! Are you enjoying bike month? I know I am, I got to ride the train for free last week! The only thing that sucked was the lack of space in the car that is specifically for cyclists, there is room for about 10 bikes but there was like 20 of us riding the train. I also found interesting the number of people that were not dressed to ride but had a bike with them, I think they were just carrying their bike for the freebie. 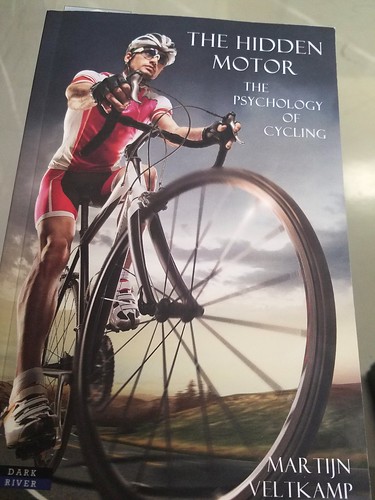 Anyhow, today’s post is a little different since it is a book review. Yes a book review! and a hard copy nonetheless! The title of the book is “The hidden Motor The psychology of cycling” by Martijn Veltkamp. The author is a psychologist based in the Netherlands who happens to be a passionate cyclist.

The book focuses on how professional cyclists are able to find that “hidden motor” within themselves to push themselves harder and accomplish things that they not normally do. If you are a bike commuter who also happens to race or do competitive rides you will know what this is about. As a former downhill racer, I would say that most of the times that I raced it was mostly my mind allowing me to block some of the gnarly terrain I was riding and not being afraid of getting injured or maybe it was just plain stupidity.

But enough of my glory days and let’s get back to the book. The book cites a lot of examples of how the mind is able to surpass our physical abilities, a lot of the examples that the author referred to were of professional riders such as Coppy, Wiggin and Jalabert riding certain famous rides such as the Giro, Tour de Flanders and the Tour de France. Interestingly, I do recall watching some of the examples that the author refers to on his book.

One of my favorite chapters is called “Fear: The Fall of Wiggins”. This chapter describes how the fear of descending and crashing got a hold of Wiggins causing him to lose a lot of time on a Giro de Italia stage. Why is it my favorite? because this chapter described how to beat your fear by a simple method: Just do it. Yes, this can also apply to bike commuting and the fear of getting hit by a car. Even though that is always in the back of my mind, riding defensively, being predictable and obeying traffics laws have allow me to face this fear and continue bike commuting.

Even though general readers can read this book, I think if you happen to be a cycling aficionado you will thoroughly enjoy reading it.

Anyhow, I have “bike to work month/week/day” to thank for trying bike commuting over 10 years ago. In fact, thanks to “B2WM”, CommutebyBike.com was born and after we were unceremoniously kicked out from CBB, BikeCommuters.com was created for your reading pleasure.

I like B2WM because all of the free stuff we can get, for example, Metrolink (the train service I use) is giving us FREE rides from May 15 to May 19. You can also find lots of freebies on Facebook, just make sure you follow your area’s bicycle organizations.

B2WM also promotes more bicycle advocacy, I like that. So party poopers, celebrate bike to work month! After all, mother’s day, father’s day or Christmas is only ONE day.