Holla at your boy, Ben August – a.k.a. “Big Ben August” from the South Bay in California, our commuter star of the week! Ben is an avid Bike Commuters reader, and we finally roped him into submitting his fun-fun commuter profile after much internet begging and pleading… 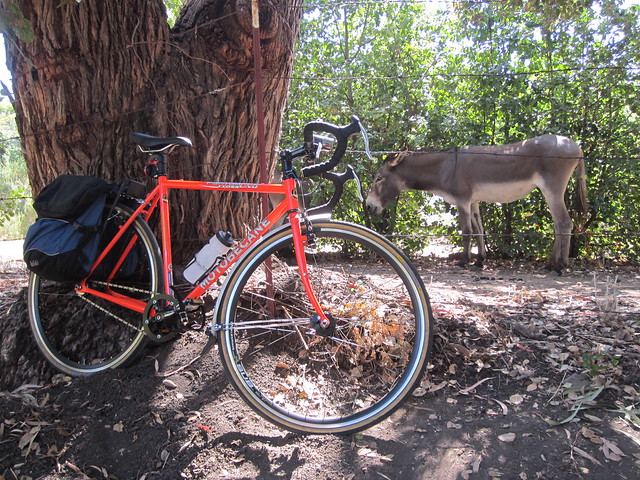 Ben August and his orange Motobecane... JK, that is a Donkey.

Since 11 September 2000, the Monday after I bought my first bike.

One day, I realized that I was 23, 5’9″, weighed about 190lb, and not in the best of shape. I also had a beat-up 1989 Civic Hatchback with nearly 150,000 miles on it that I didn’t want to replace nor did I have the money to replace at the time. My friends were mountain bikers, so I went out and bought a Trek 4500 (which is a good bike for heavier riders). I was so excited to have it that I did a dry-run multi-modal commute to my office that night. Sure, it was only about 6 miles of riding and 10 miles on light rail total, but it was the start of a beautiful friendship. That was 12 years ago.

Over the years, the reasons have shifted from the above to ” I have this new truck, but I don’t want to pay for the gas” to “this is good for me” to “this is how I prefer to do it” to “my wife has the only car”… or some combination of all of them!

Currently, I ride almost 12 miles each way, and it is occasionally lengthened for errands. My time record is 40 minutes, but the average is closer to 50-55. This is only slightly slower than taking the shuttle bus-train-light rail or even driving over the same distance– I have some experimental data to prove it. 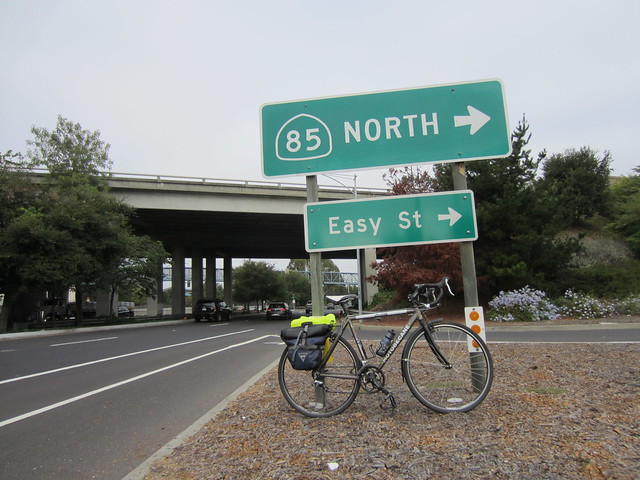 Economically, it is a no-brainer. Stanford (my employer) charges $300 a year for the cheap parking spaces and $600 for the expensive ones. Right out of your paycheck! They pay me (or anyone else who signs the form promising never to drive to work) $300 extra a year not to drive. So a year after I started here, I sold my truck. We just didn’t need it anymore. 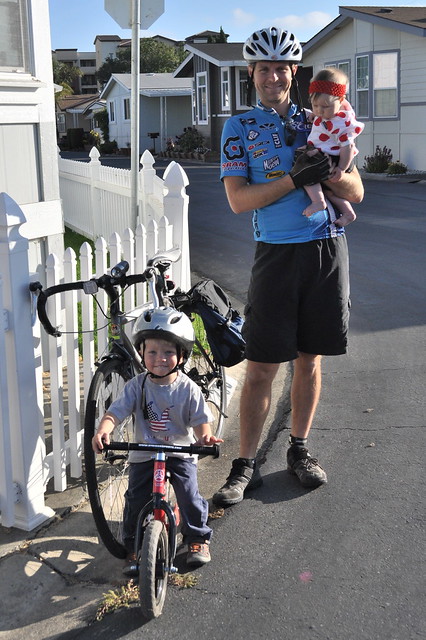 Ben and his two chicken nuggets.

The mental health dividends are priceless. I have two kids at home, and my daily quiet time is on the bike between work and home. Some of my best work ideas come to me on the bike, too. When I have a programming project, it’s better to save it for the end of the day so I can grind it out in my mind on the way home. I come home with a better understanding of an issue from work and all ready to help with dinner and putting the kids to bed.

I work in IT, as the server/infrastructure admin for one of the academic departments at Stanford University. Between my house and the office, I cross at a minimum Sunnyvale, Mountain View, and Palo Alto, and sometimes I go through Los Altos and Cupertino also. It’s far more suburban than most of the contributors on this site, and it sure isn’t Hawaii (I wish!), but this is where we live. :) 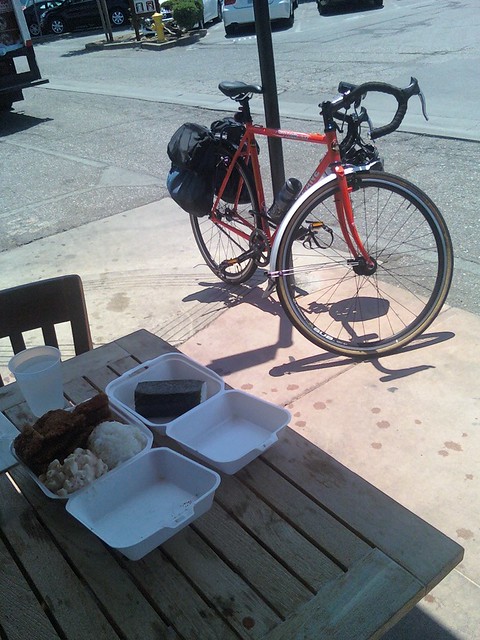 Single speed and musubi… is that a side of mac salad AND katsu!?

My stable has stabilized over the years. I’ve had mountain bikes, a touring bike (when I thought I’d actually go touring), a folding bike (it was a blue Xootr Swift), and even built up a wacky 26″ MTB-with-drops from scratch. Never more than three at a time, though. At some point along the way, I became my own wrench and got married and had children, so all of my current bikes came from BikesDirect to save a buck and I’ve assembled and maintained them myself.

My three current rigs, in chronological order of procurement are:

Valentine’s Day 2011: I was going to surprise my wife by showing up at her office (her office was 16 miles the other direction from our house and she went to work later after taking our son to the sitter) and taking her to lunch. I hopped on the mini-velo at the usual time and went off toward her office instead of mine. I get to the seedy industrial neighborhood north of downtown San Jose and it starts raining. The mini slipped on some wet railroad tracks on 10th Street and I ate it right in front of a city truck. The crash opened my knee up a little, but I was okay… and still determined. I stopped in downtown for some flowers and had a bike messenger ask if I wanted to help him deliver flowers next year. I get to my wife’s office about an hour earlier than planned, soggy and still bleeding from the knee, but holding a dozen roses. Did I mention that my wife is a nurse in an office full of nurses? :) She patched me up, I changed, her boss gave her the day off, and we had a great lunch together.

I also recently made a pannier out of a cat litter bucket to replace a badly damaged nylon-and-PVC pannier that I had unsuccessfully repaired. It was as simple as removing the mounting hardware from the pannier and putting it on the bucket. Since I got the bucket from a neighbor, it cost me absolutely nothing. It is absolutely hideous and I have made no efforts to hide its former purpose (other than a little Scotchlite). It doesn’t even have a lid, as my supplier didn’t keep them. I have taken SO much flak for doing this. From roadies who scoff at it to other commuters who think I need more “serious” gear. The moral of the story: If it works, do it and do it with conviction.

I park in the office, so I don’t usually have to tell them anything. :) After 6.5 years in the same department and 12 years on the bike, one’s reputation gets around. But when one of the uninitiated catches me in the elevator with my bike, the questioning goes something like this:

Because of this, I have unwittingly served as inspiration for a few instructors and staffers over time and the cubicles and offices are pretty well-populated with bikes. 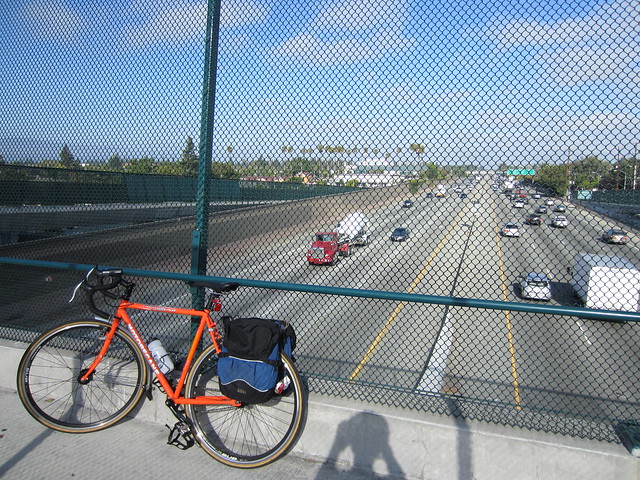 The Ridiculous Orange Motobecane is an inspiration, when real panniers (not kitty litter buckets) make for a slick lookin' steed!

We have a great group in the area in the Silicon Valley Bicycle Coalition, but I am sadly not a member. I’d never be able to make the meetings. I am at the very least on their mailing list and I do attend their annual bike swap meet.

There is another non-profit group in San Jose called Good Karma Bikes (http://goodkarmabikes.org) that maintains and distributes bikes for the homeless and underprivileged people, and also teaches maintenance classes to anyone interested. I went by there with a box or three of parts to donate and got a tour of the place a few weeks ago. They are an awesome bunch and I’d love to volunteer for them when the kids are a little older.

Other than that, I have needled a couple of local cities into getting some things fixed (overgrown street trees and stoplight timings). Caltrans, please fix the light nearest my house, the timing is still too short. :)

Anything else that you want to share with us?
I am pretty sure that was plenty. I have no blog, but I am a regular on bikeforums.net.

Thanks for sharing, Ben! I love getting to know our readers more through the Commuter Profile series! We hope you enjoyed our show today, Cycle Ladies and Gents… If you, too, would like to show us your mug, send me an email at mir[at]bikecommuters[dot]com and we’ll hook you up with the profile questionnaire!