This week’s commuter profile comes from Dwight McKay — we’ve had his profile in the hopper for several months…it’s fair to say that I am a little behind in publishing some of these. In any case, check out his words and photos below!

I started commuting shortly after college in 1984, but stopped after moving out of town in 1988. I started again in 1995 when we moved closer my work, and have been working towards a nearly car-free commute. Right now I am pretty much bike-only for the work commute except for days when I have a few time critical errands or need to haul my kids around to after-school activities.

Back in 1984, I commuted by bike because my wife and I had only one car. When we moved out of town, my wife and I rode for recreation and did a century together on a tandem. We moved back into town when my first daughter was born. The growing family responsibility ate into the time for long recreational rides, and the closeness of campus made switching back to bike commuting a natural choice.

My commute is about 4 miles one-way. The route has bike lanes the entire distance and a single moderately steep hill that’s up hill going home. It is a pleasant ride in a small college town. I grew up riding in a suburb of New York City, so this is a very easy environment to ride in.

When the weather is nice and I’m looking for more time on the bike, I make my homeward bound trip longer by heading out into the county and then looping back to the house. The beauty of a small town is that it is easy to escape onto less traveled roads. County roads here in Indiana are mostly in a north-south, east-west grid, so it’s easy to add distance in increments. My commute goes right past the Junior-Senior High School my kids go to, so I’ve been able to ride to school with them as part of my commute when they let me. 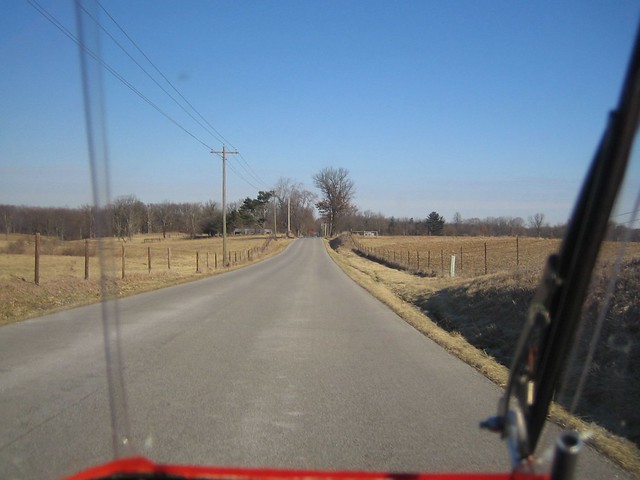 Cycling is about mental, physical and spiritual health for me. Commuting embeds most of my exercise time in my commute time, so it is as if I get my exercise for “free”. I find that I’m physically more aware and awake after the ride to work and the ride home.
But I judge that the mental and spiritual side of cycling may be a greater, and more easily overlooked benefit of bike commuting. Being outside has always deeply moved me. Seeing the sunrise or sunset, seeing wild geese fly overhead, or smelling freshly mowed grass fills me with awe. I feel like I am part of something much bigger than myself when I look down a long road to a far horizon as I ride. The ride home provides the physical sensation of putting miles between myself and whatever went on at work. That creates the mental space to set that aside and be present to my family. I commute for my head and my heart.

I live in West Lafayette, Indiana. I am the Director of Research Systems in the IT Systems and Operations group at Purdue University (Go Boilers!). I manage a team that deploys and operates supercomputers and grid services for researchers at Purdue. It’s a terrific combination of smart, technically savvy colleagues and a relaxed college town atmosphere.

I’ve been a recumbent rider for about 20 years now. I got hooked when my wife and I were living out in the county and I was looking for something more comfortable on long rides. I’ve owned a couple of different recumbents over the years and have two in my stable at the moment. 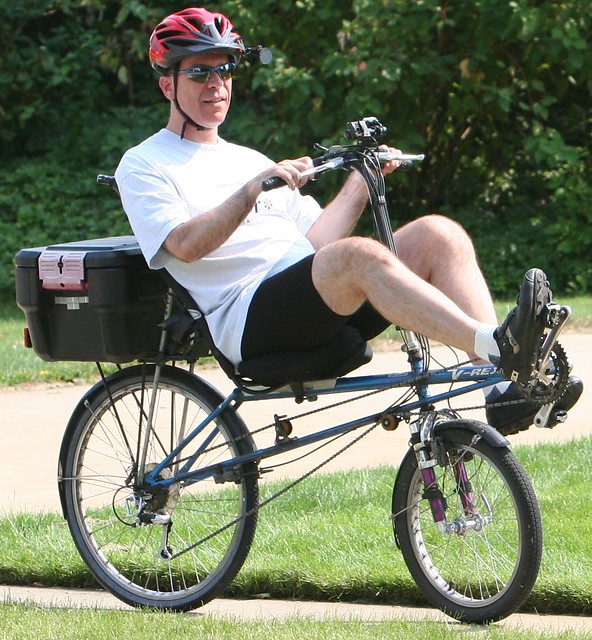 The above is my Rans V-Rex. It’s my fair weather ride. The short wheel base makes it maneuverable and easy to park in bike racks on campus. I started off using cheap panniers off the rear rack, but got fed up with the lack of rain protection they offered and the need to take them off the bike when I parked at work. I found a black storage box at Wal-Mart that is just about the same width as the seat back. Putting a few bolts through the bottom box into the rack converted the box into a weatherproof truck.

I typically carry a change of clothes for work and my laptop in the box. I leave a pair of shoes and pair of pants at work and trade those out every so often when I have an errand to run and am driving the car to work.

You can’t be shy and ride a recumbent in a small town. I get lots of questions, most often about how much the bike costs and how tough it is to balance. Recumbents are expensive due to their custom builds and limited production runs. My short answer is that they cost as much as a custom bike frame, which seems to satisfy most folks. Balancing on a recumbent is something an experienced cyclist can “get” with a few minutes of practice. Several of my riding buddies have ridden the V-Rex with just a few minutes of practice in a parking lot.

But if you really want to get noticed, you should try riding a velomobile to work! This is my Leitra, built by Carl Rassmussen in Denmark. It is a tadpole style, recumbent tricycle with an aerodynamic fairing. I imported it three years ago to see if I could replace my car during the winter months. You can read more about them at http://www.leitra.dk/. 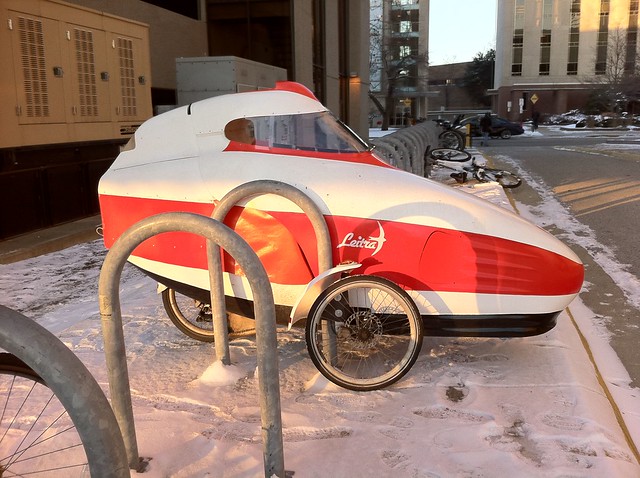 The Leitra has a large cargo bin behind the seat with plenty of room for my daily haul to work. It has turn signals and windshield wiper on the front windshield. The wiper is driven by hand with a small lever inside. A triangular scoop on the nose of the fairing feeds vents that help to keep the inside of the windshield clear. 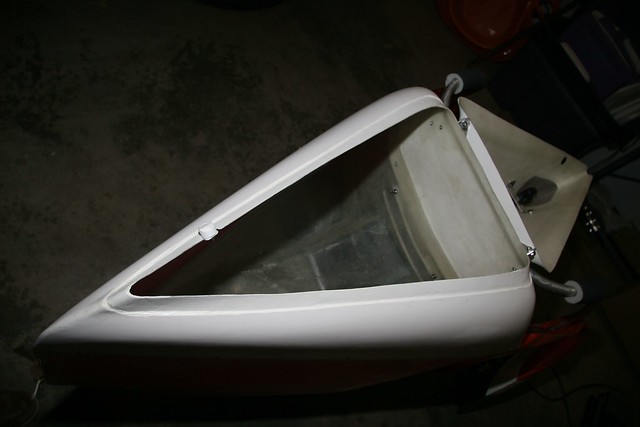 The Leitra doesn’t fit into older bike racks. You need to find a spot on the end or between two of the bike loop style racks. On the side of the fairing, ahead of the Leitra logo you can see the adjustable side vents. These can be opened and closed while you ride to control how much air blows into the cockpit.

The nose fairing tilts forward to allow the rider to sit down. The nose fairing has a quick release that makes it easy to remove. Here’s what it looks like with the nose fairing off. The carbon fiber seat is more comfortable than it looks. I use a small inflatable pad on the bottom. Steering is via the two side sticks on either side of the seat. There’s also a small amount of interior storage below and to either side of the seat. That’s a great place to put a hat or heavy gloves when you get hot and need to pull them off. 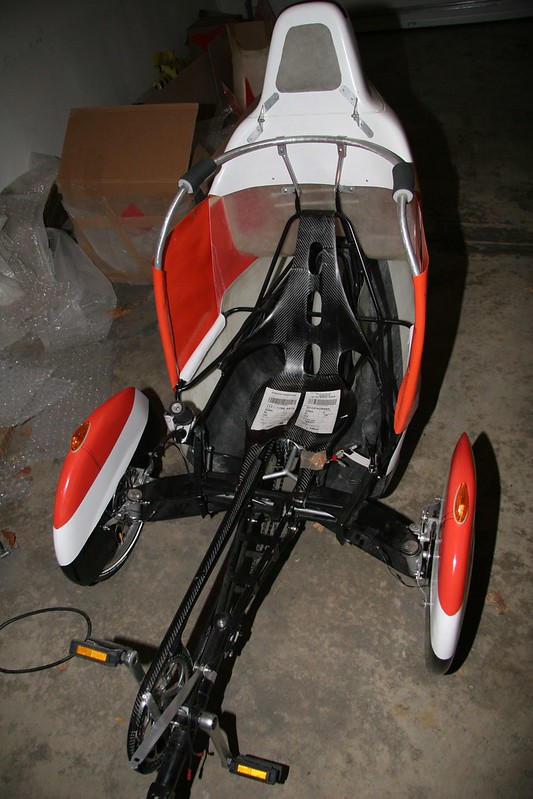 The Leitra has succeeded in freeing me from my car in the winter, but not without some problems. The fancy wheel covers you see in one of the pictures turned out to be impractical in the snow and had to be replaced with simpler fenders. Even though the Leitra design includes a ducted vent from the nose to blow air over the wind shield, fogging and icing of the wind shield can still occur. And while the fairing gives you a lot of control over airflow and a good deal of warmth, it’s still a challenge to keep my hands and feet warm when the temperature gets down to 0F and below.

I am a believer in riding “like a car”, so I take the lane when I need to for turns or when the bike lane is blocked. One morning, I was riding the V-Rex into work and moved over to take the lane due some debris in the bike lane, getting in front of some traffic. A county sheriff car passing by in the other direction flipped on his lights briefly right after he passed me and turned around to come up behind me. I thought to myself, “I wonder if I’m going to get an ear full about taking the lane.”

But when he rolled up along side me and rolled down his window, he greeted me by saying he rode a recumbent also! We had a brief chat about who made my bike and wished each other a good day.


What do people (coworkers, friends) say when you tell them that you are a bike commuter?

This time of year (winter), most folks are amazed I’m riding at all! “Are you crazy?”, they ask. People are concerned about the weather. How do I ride in this heat / cold / rain / dark / sun? Folks want to know about how I deal with clothing changes. They are concerned about my safety in traffic. My staff, who have seen me ride year-round for several years now (and are sure I’m crazy!), are generally more encouraging.

Most folks wonder if I do this for the cost savings, which really isn’t the motivator for me. I’m often amazed that folks have a hard time seeing the emotional and spiritual benefits as sufficient reason to ride. If you could do something that adds a little adventure, a little spark to your day, wouldn’t you do it?

While I appreciate the work of bike advocates, I am not involved in those efforts.

I write a blog about my rides and other random things called “Up Hill Both Ways”.

The local magazine did a brief article on my Leitra. It might appear on their website at some point, but at the moment it’s only available in print.

We’d like to thank Dwight for sharing his pictures and thoughts with us. It’s refreshing to hear a fellow commuter expound on the “spiritual benefits” of using a bike as transportation — something I’ve long thought about but wasn’t able to put into eloquent words like Dwight does. For the rest of you, if you’d like your fifteen minutes of Internet stardom, we are ALWAYS on the lookout for profilees. Drop a note to ghostrider[over there at]bikecommuters[dot]com and we’ll hook you up with our questionnaire and simple instructions. Don’t be shy — share your commute with the rest of the world!