As promised, here is the second part of our “Let’s Go Ride a Bike” commuter profiles. Today we are proud to present Trisha P., the second half of the stylish dynamic duo behind the blog.

I started riding my bike to work in April of 2008.

It seemed like a good idea at the time. Gas prices were rising, I had just bought a new condo that was close to my office, and I needed the physical exercise. The idea of getting a workout while doing something I needed to do was attractive–I’ve never been the treadmill type. I had fond memories of riding my bike as a kid, and the element of adventure also appealed to me: at that point, I didn’t know anyone who commuted by bike. My commute is about 5 miles round trip, mostly through neighborhoods and side streets. I started out just riding to work, but now I frequently cycle over to local restaurants and bars as well as the grocery store.

Bicycle commuting has definitely improved my life! Riding my bike to the office and places in my neighborhood makes me feel more like a part of a community. I am able to experience the weather and the seasonal changes (good and bad) for at least 15 minutes a day before being stuck at the desk. It’s not a big money saver for me, since my commutes are so short, but it does help the environment and my health has never been better. As for relationships, I’ve made many new cycling friends, especially after Dottie and I started our blog in January. 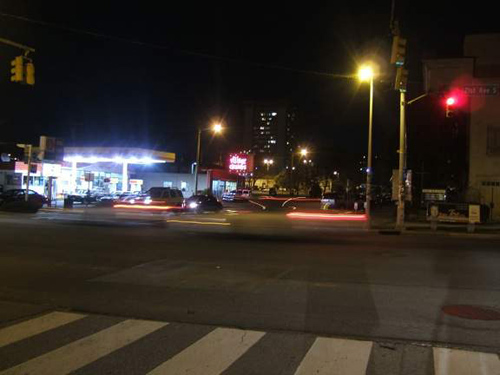 I’m an editor at a book review, and I bike commute in Nashville, Tennessee.

I started out riding the 1990 Schwinn Frontier that I received for my 10th birthday. My very first big-girl bike! Pinkie had been gathering dust for years when I dug her out of my grandparents’ basement last year, but she’s forgiven me the neglect and has been a trustworthy commuting companion. She stands as testimony that you don’t need to spend a ton of money to give bike commuting a try: anything with two wheels will give you a sense of whether it’s for you or not. Unfortunately I thought a pink bike was thief kryptoniteâ€”apparently not. Pinkie was stolen in February. 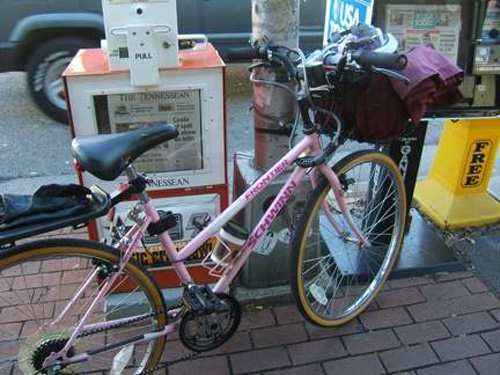 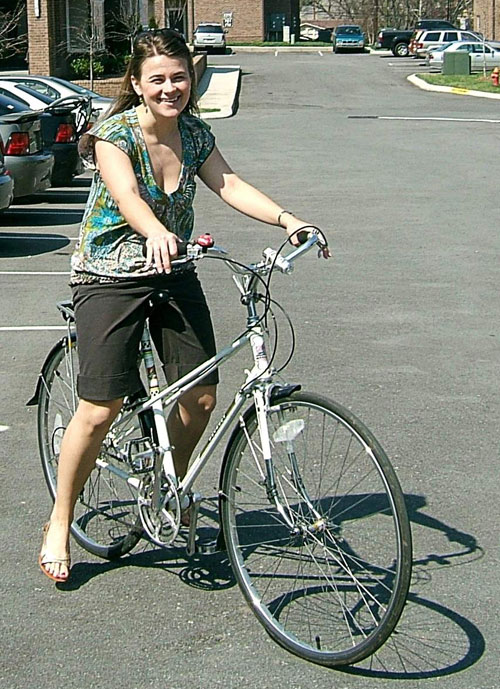 That said, when I started bike commuting, I made a pact with myself that if I stuck with it through a winter and a summer, I would buy a new bike. Shopping for a reasonably priced bike made specifically for commuters was quite the headache, but I eventually found a 2008 Batavus Entrada Spirit on an end-of-season clearance in the UK for an amazing price and will be bringing it home in May. First brand new bike in 18 years — it’s been a long time coming.

Back in October, Belmont University hosted a presidential debate. My route takes me past the school, so I was able to see how the landscape changed daily as fences were put up for security and lanes were blocked off (thankfully, not the bike lane!). The day of the debate, policemen and private security guards were posted in front of and behind the fenceâ€”and one of them called out, “Nice bike!” as I rode by. I like to think it was a secret service agent who later told Obama and McCain about me and my pink bike.

And just last month, I decided to give riding in the snow a try (don’t get many opportunities for that in Nashville) without realizing the precipitation was changing from snow to freezing rain and back again. It was possibly the most miserable commute ever, but at the same time, exhilarating.

Other than that, I’ve been chased by a (friendly) dog and endured the usual cycling headaches of rude drivers, being buzzed, blocked bike lanes, etc., but mainly my commutes are pleasantly uneventful, and I like it that way! 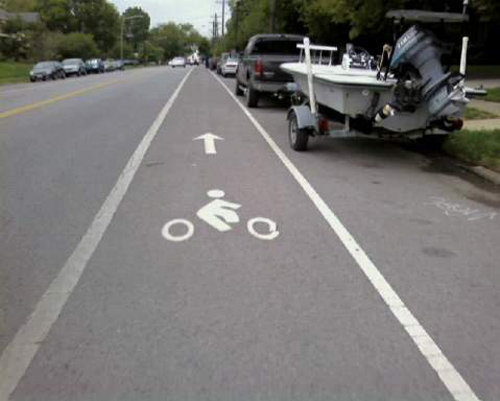 (editor’s note: Trisha is one of very few commuters who has to avoid getting doored by bass boats!)

Most people are just plain curious. Some of them think I’m crazy for riding when it’s above 80 or below 40, or when I’m wearing a dress or skirt, though after 10 months my coworkers don’t really comment on it so much anymore. A lot of people ask me if it’s safe (I think so), or if I carry mace (no). Nashville isn’t much for public or alternative transportation, so the idea is a completely new one to many people, like it was for me before I started. But everyone has been supportive and some people have expressed interest in giving it a try themselves. My boss once told me I was “quite a sight on that bike.” Not sure what she meant by that…

No, and it’s horrible, since there’s a lot to be done to make Nashville more bike-friendly. Lately I’ve been paying more attention to the city planning committee, which is working on a proposal for more bike paths/lanes and greenways, and plan on attending their next meeting. Other than that, there’s just the little blog Dottie and I started, and my example as a bicycle commuter. Any readers who know about something I’m missing out on in Nashville, get in touch! 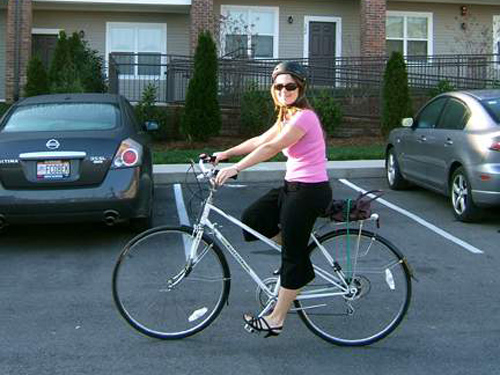 It’s OK to start gradually. My first goal was to ride to work at least twice a week — then it got up to three times, and now I usually ride as many as the weather will permit (I have to admit that pouring rain has so far defeated me). If you keep it fun and comfortable it’s easier to stick to it.

Again, we’d like to thank the lovely ladies of Let’s Go Ride a Bike” for sharing their profiles and their experiences with us (and also showing the rest of us a thing or two about looking stylish on and off the bike!). Check out their blog…it’s chock-full of goodness!