Note: We’re pleased to offer an intro to Bruce Wright, one of the leading advocates for better bicycling facilities, policies, and education in the greater Washington, D.C. area (and specifically Fairfax County, VA). Bruce’s advocacy work on the board ofÂ WABA and as chairman ofÂ FABBÂ is very nearly a full-time job at this point, so we appreciate him taking the time to answer some questions for us!

How long have you been a bike commuter?
I started commuting by bike on a regular basis in 1979 and have been doing so almost daily since then (34 years).

Why did you start riding your bike to work and how long is/was your commute?
There were several reasons why I started to bike to work. I understood the health, economic, and environmental benefits of biking and since I had a short, 3 mile commute, I decided to bike instead of buying a second car and driving. I could commute by bus when necessary, which was very rare, maybe 3 or 4 times a year.

How does Bike Commuting help you with your lifestyle (economics, health,Â relationships)?
Since I retired from working full time my bike commuting to work has transformed to using a bike for almost all other local trips. I’m 64 years old and have been able to maintain the same weight as when I was in high school. I take no prescription drugs other than for minor medical procedures and usually only visit the doctor once a year for a physical. I think I’m a happier, more well-adjusted person because I get regular exercise by riding. My wife and I enjoy riding together as well. One caveat; I now use sunscreen whenever I go outside. Bike commuters are exposed to the sun more than others and we need to protect ourselves from the harmful effects of UV rays.

What do you do for a living and in what city/town do you bike commute?
When I worked full time I was a geographer with the U.S. Geological Survey in Reston, VA. Since I left the Survey in 1999 I’ve worked part time in several different jobs: as a legislative aide to a local politician, as a bike shop employee (atÂ bikes@vienna), as a bicycle skills teacher, and now as the head of a local bicycle advocacy non-profit (volunteer). I’ve made a conscious decision to work in places where I can easily bike.

Lately I’ve been mostly using a Brompton folding bike. It has six gears, fenders and a rack and a front carrier block that holds a large bag. The bike is great for taking on Metrorail and bus and is a fun way to get around. For longer commutes or trips where I need to haul more stuff I use a Bruce Gordon touring bike outfitted with fenders, front (occasionally) and rear rack, and large panniers. I used that bike to travel cross country in 1999. I also own a recumbent tandem that I ride with my wife, a beater bike for parking at Metro, and a short wheelbase recumbent that doesn’t get much use these days.

Any funny or interesting commuting story that you may want to share?
I’ve helped many motorists who have car problems. When traveling on a bike it’s harder to pass by someone in need.

What do people (coworkers, friends) say when you tell them that you are a bikeÂ commuter?
Most people have never tried riding a bike to work so the concept is foreign to them. I tell them that it’s easier than they think and that they should try it one day. It takes a little planning but most people can easily ride farther than they think. Bike to Work Day is a great time to encourage co-workers to try biking. I know many people who rode for the first time on Bike to Work Day and have continued to bike commute at least some of the time since then.

How about bicycling advocacy? Are you active in any local or regional advocacyÂ groups?
I’m on the Board of Directors of the Washington Area Bicyclist Association and chair of their advocacy committee. I’m also one of the founders and now chairman of Fairfax Advocates for Better Bicycling (FABB), a local volunteer non-profit advocating for better bike conditions and policies in Fairfax County, VA. I’m also a member of the League of American Bicyclists and a League Cycling Instructor.

Anything else that you want to share with us?
The world would be a healthier, happier place if more people took short trips by bike. 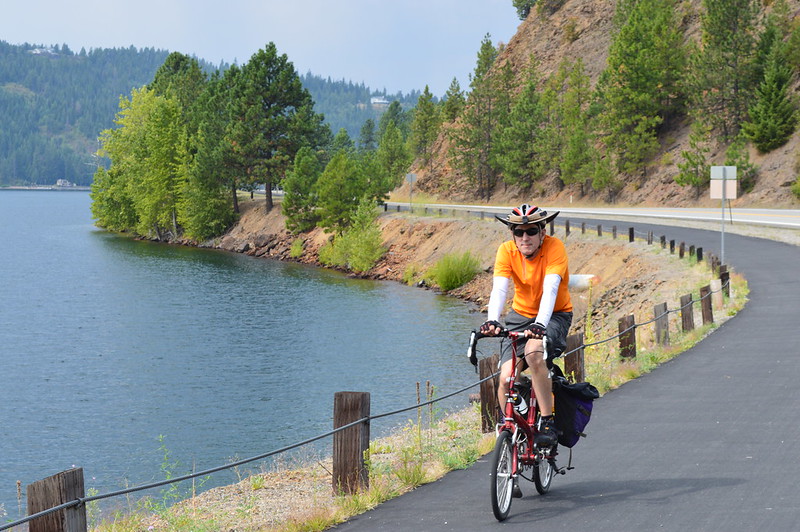 This past March I ventured (for the second year) to Washington, D.C. for the National Bike Summit.

For those of you unable to attend the event “in-person” I hope that the insights of these next few posts about the National Bike Summit may inspire you to go in future years or to at least check out the presentations now available online for your viewing pleasure.

This year “more than 750 attendees from all 50 states, the District of Columbia and three Canadian provinces participated in the 2013 National Bike Summit!”

Let’s start from the beginning…

Upon my arrival in D.C. (much chillier this year and not a cherry blossom in bloom!), I perked up at sight of the bright red Capital Bikeshare bikes. 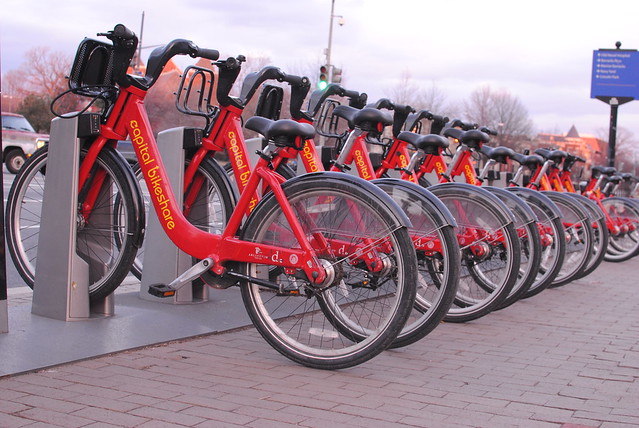 I, however, passed by the bikeshare bikes; instead I borrowed a bike from Miriam’s friend (who graciously lent me her bike “Cherry” last year and this year – thank you!). 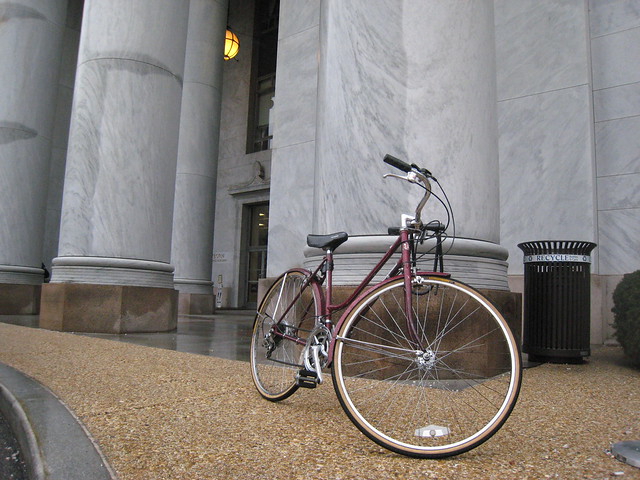 Once on bike, I was equipped to join an evening bike ride organized by the group Black Women Bike. Bundled up, we cycled past several D.C. monuments before circling back to a launch party for the Washington Area Bicyclist Association (WABA)’s Women & Bicycles campaign – an outreach and education program geared to get more women on bike. 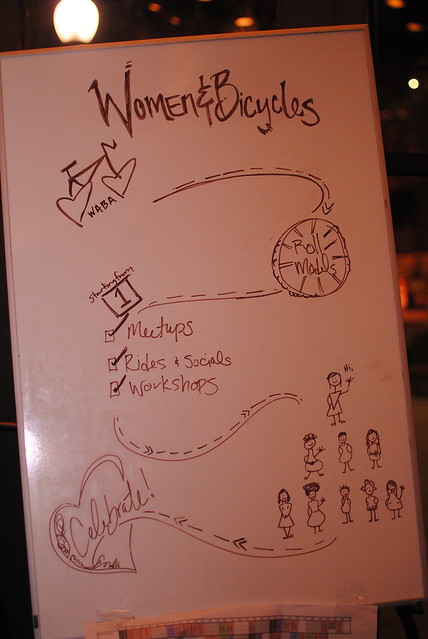 The event was full of bike love: 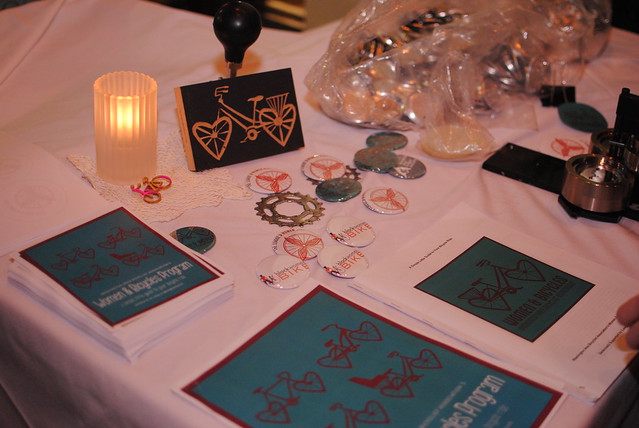 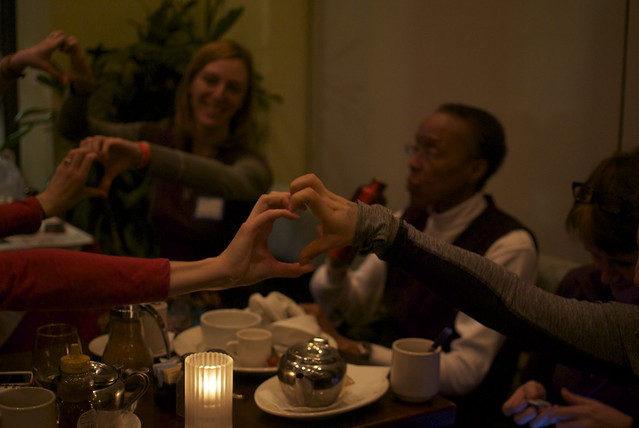 Plus books and such from Elly Blue and WABA: 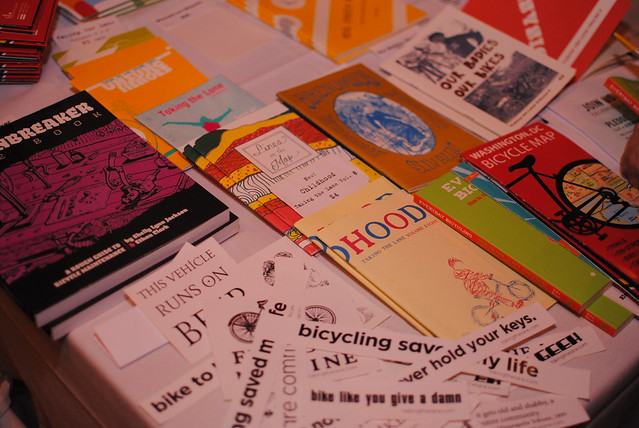 My initial day in D.C. would set the pace for a jam-packed week of everything bike advocacy and meeting awesome bikey folks… especially meeting these other fine ladies named “Elizabeth”:

Each year I design and post calendars for sale and donate all proceeds to the Ride of Silence to advocate for sharing the roads and honor all fallen cyclists.

2013 is already upon us, and the calendars are available. You know you need a bike-themed calendar for your office space, your kitchen, your garage, your bike area, etc. Also make great gifts!

Buy a Joys of Bikes calendar and show your support for the annual Ride of Silence – May 15, 2013 (always the third Wednesday in May and clearly labeled on this calendar so you won’t forget).

In addition to the bike-themed calendar, I’ve also created a Chicago and a Flowers calendar:

Thanks for your support!

WABA – the Washington Area Bicyclist Association – is the foremost bicycling-related organization in the Washington D.C. area – and as such, has a reach beyond just the D.C. area as well. Though they technically represent D.C. proper as well as Arlington and Fairfax counties in Virginia, and Montgomery and Prince George’s counties in Maryland, they have a reach well beyond that thanks to the presence of a few congresspeople who spend a bunch of time in the area. What members of Congress see in DC leaves an impression – good or bad – that they take back to their own districts or states. Lately it’s been a lot of good, thanks to things like new bike lanes filled with bicyclists, a really robust Bike to Work Day every year, and the nation’s biggest bikeshare program, CaBi (short for Capitol Bikeshare). While WABA doesn’t get all the credit for these, they have been tireless in advocating for them, and without them it’s doubtful we’d have anywhere near as much good news about biking in DC.

WABA’s mission is: creating a healthy, more livable region by promoting bicycling for fun, fitness, and affordable transportation; advocating for better bicycling conditions and transportation choices for a healthier environment; and educating children and adults about safe bicycling.

Not much to argue with there!

THIS WEEK ONLY, WABA is offering discounted membership – both individual and family rates are $10 less than usual! If you live in the area (or heck, even if you don’t) I HIGHLY encourage becoming a member of WABA. Not only will you be supporting an organization that’s been doing great things for bicyclists, you’ll also (if you live in the area) get nice stuff like shop discounts. My local shop offers me a 10% discount on parts – and I think that’s almost paid for my membership in the last year!

So what are you waiting for? Go get (or renew) a membership already!

In my inbox this morning from PeopleForBikes.org was an interesting public awareness video message – “Vulnerable on the Open Road” – in which “five professional U.S. cyclists reflect on their experiences with bicycle safety.. The riders share their visions for better bicycling conditions and lessons for safer motorist-bicyclist interactions.”

Their advice:
* “Slow down” – this goes for bicyclists and drivers, too
* “Drivers need to understand that cyclists are traffic on the roads”
* “Get more people on bikes so that it’s a normal thing for you(drivers) to pay attention to cyclists on the road”
* “Education”
* “Training or living in a community with really good bike infrastructure with bike lanes, with easy routes in and out of town to be accessible on your bike…. above all it keeps everyone safer – it keeps the motorists moving smoothly and it keeps the bike riders safe; if things are safe and things are easy, we’re going to ride our bikes more, for sure.”
* “I think it’s crazy for people not to ride bikes. Bikes are just amazing things that can transform your life. The benefits of riding your bike definitely outweigh the risks of being out there with cars for me.” (this advice is my personal favorite!)
* “I think one of the biggest misconceptions is that people think that as a cyclist that we don’t drive cars”
* “You have to respect everybody on the open road and if we all work together, we can all enjoy exactly what we’re doing and go along with our lives without interrupting each other.”

Even though these riders are the top 1% of bicyclists, their adviceâ€”slow down, be aware, don’t blow through red lights, build more infrastructure, get more people ridingâ€”applies to anyone who likes to enjoy the simple pleasure of a bike ride.

Would you add any points to this advice list? I think it applies to all road users… especially the need for RESPECT by all and for all on our roadways.

Have a respectful ride.