Munich is one of the most beautiful, bike-friendly cities in Germany! Famous for its Oktoberfest where beer and girdles overflow, the place doesnâ€™t get nearly enough the credit it deserves for its cycling routes and infrastructure. If you likeÂ getting on your bike and exploring, weekend breaks to Munich are a necessary and thoroughly enjoyable pastime. Here are a few ideas which will help you discover a side of Bavaria’s capital besides pale ale and leather shorts.

If you don’t mind biking in urban environments, the downtown area is a great place to start your explorations. Try a “Tour of the Tors”! “Tor” is the German word for “gate” (oh, and for â€œgoalâ€ in soccerâ€!), and Munich’s old town had a good number of those. Theyâ€™re all within a kilometer of each other, sometimes less, and if you go through them in succession, youâ€™ll circumscribe the area behind the old fortification walls.

Keep in mind that some of the old gates no longer exist, but Sendlinger Tor, Karlstor, TÃ¼rkentor, Siegestor, and Isartor still keep you running along the historically correct perimeter. In May 2014, an art project was launched to remind locals and visitors of the “lost gates” â€” the ones which wars and old age took down. You might come across curious art installations where you can stop by for a minute and read up on the missing pieces in Munich’s gate puzzle.

After a good time downtown, there are few things better than resting your eyes with some nature gazing. As industrial and rich as it is, Munich offers parks with sprawling fields and meandering bike and walking paths. The most famous destination is the English Garden, a green symphony of nature with 78 kilometers (yup, Europe is metric!) of biking routes. You can enjoy the sun or slip into the forested paths. Make your way to the Chinese Tower, one of Munich’s most legendary beer gardens, and have a well-earned break.

Another terrific biking destination is the Olympia Park not too far from the city center. A beautiful bridge with glass railings brings you to the start of your tour, and you can put your stamina to the test with several gentle slopes on your way to the park’s heart: the Olympic Stadium and the BMW Arena and Museum nearby. This route offers mostly sunny tracks and open spaces, with some culture and fun on the side for when you want to rest. A classic Munich bike tour, through and through!

Munich is something of a cyclistâ€™s paradise. You can get in some serious cycling while still cramming in the chance to experience culture.

Mir writes an open letter to the Backup Bike on loan from a friend, always there to save the day when your main commuter ride is down for the count.

Not everyone is lucky enough to have stables full of two-wheeled steeds, fleets with a ride for every need, and extra backup bikes to lend out to friends. But for those of us who do (exclude me, but include my friends) an official round of applause for the Backup Bike on lend from a friend.

Oh, Backup Bike, you save my asparagus when I’m caught in a pickle. You remember when I borrowed a rear-mounted grocery rack and installed it on my main ride, Cantaloupe? Cantaloupe, she’s great and all, my main steed for sure… But sometimes Ye Olde Reliable has a bit of a breakdown and ends up in the hospital: the hardware failure left me and Cantaloupe in a giant rack/fender/brake mess that merited a trip to the Bike Doctor… Cantaloupe was down for the count. Damn those bumpy hills that can take out a pair of lock nuts like nobody’s business!

But then there was you: Backup Bike. Â Oh, Marin comfort cruiser, light as a feather, fenderless and free… I even like that little swatch of duct tape on the smooshy saddle that says “Hey bike thief, choose a different quick release today…” With your triple crank and upright ride, it was a nice change of pace from Cantaloupe’s ten speed stand-up hill climb. You’re the universal perfect bike for a last-minute fix: a one-size-fits most that’s good enough to get the job done, and simple enough for most rides. From your cushy saddle, we had some good times enjoying nice blue skies and picturesque hilltop views of the water.

Thanks for saving the day, Backup Bike. It’s always fun to mix it up and ride a new set of wheels. And to the friends out there with bikes on loan, you make commuting a breeze.Â And,Â on behalf of all potentially stranded bike commuters out there, a big thank you to the commuter collectors who are always willing to lend an extra set of wheels to a friend in need.

Pedal on, sweet commuters… pedal on!

I was more than a little alarmed to read the statistics for stolen bikes in San Francisco. In 2012, one bike was stolen every three hours. Over 4,000 bikes were stolen in that year alone. And of the bikes that were recovered (about 850), less than 17% of bikes found their way back home. So many lonely bikes and wheel-less bikers! 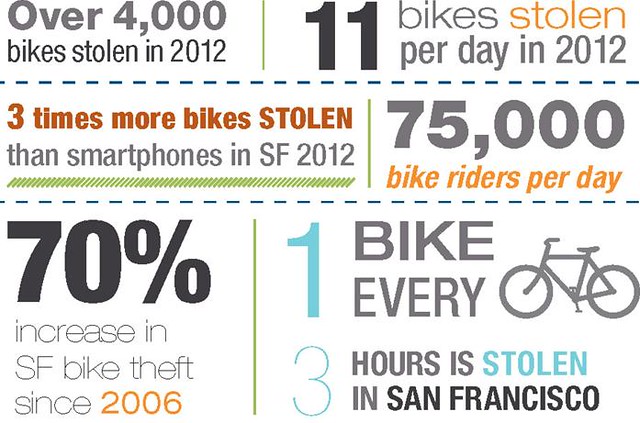 Thankfully a new and free bike registry â€” SAFE BikesÂ â€” aims to improve those numbers. According to a recent update from the SF Examiner, a San Francisco police advisory board and safe-streets advocates are launching the free registration program this month to help reunite bikers with stolen bikes. The SAFE Bikes program allows riders to register a bicycleâ€™s serial number, make/model, and color into a secure database thatâ€™s connected to the police department. The owner will receive a unique and permanent ID tag to place on the frame. If a registered bike is ever stolen and recovered, SAFE will identify the bike and contact the owner. 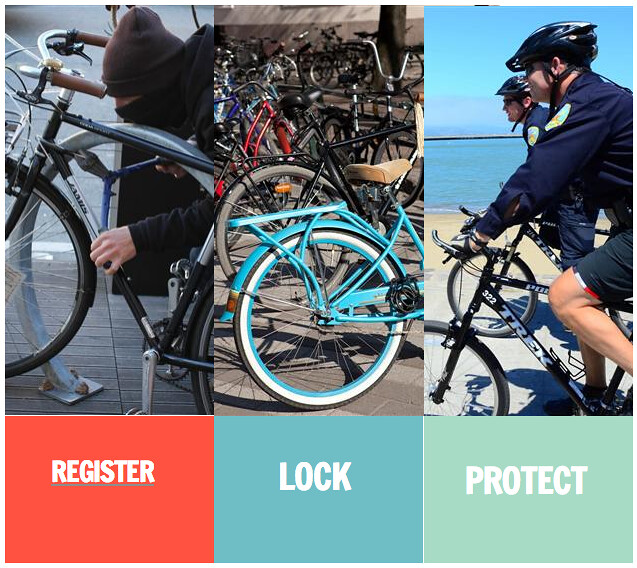 A quick survey of some of my fellow San Francisco bike commuters (ok, a group of friends at a dinner party) reveals that not a-one has registered his or her bike. That goes for me, too. This particular group of riders use bikes as a main form of transportation around the city, and weâ€™re not naiveâ€”we are well aware of the dangers, even of just leaving your beloved bike locked up in front of a bar while you run inside for a quick pint of Pliny the Younger.

When I asked my cycling cohorts why they had never registered their bikes, the mostÂ cited obstacles included â€œhassle,â€ â€œcost,â€ and the belief that registering a bike â€œwouldnâ€™t make a difference.â€

But I believe SAFE bikes will go a long way to overcome these registration issues.Â In fact, Iâ€™m leading the wayâ€“â€“Iâ€™ve registered my bike. And it was easy!

Is your bike registered? If so, what program have you registered with? Does it provide you peace of mind?

Also, side note, SAFE has a great graphic showing the best method for locking up your bike. Check it out.

Since Mir.I.am did such a great job on the bike share by the bay article, I wanted to provide our readers this infopgraphic that was provided to us by momondo.com to help those who are planning on traveling to Europe, to take full advantage of the bike sharing programs in several European cities. What’s even more interesting, the bike share program in Paris has about 18,000 bicycles available for rent and 1200 bicycle stations. Wow, that’s pretty impressive!

Any of you bikey kids lookin’ to cut the sweat out of your long commute? Or maybe you’ve been thinking about e-pimping off your bike, but it just looks too tedious and technical to set up on your own? Well, check out this Euro-stylized invention coming out soon: the FlyKly Smart Wheel!

“We want to make cities more livable, and more people, not car friendly!” – FlyKly on the Smart Wheel

I know there have been a butt-load of Smart-themed kickstarters and new projects out, but check the article if you’re interested. Plus there is gray-themed fancy people on bikes photos for your enjoyment, like this: 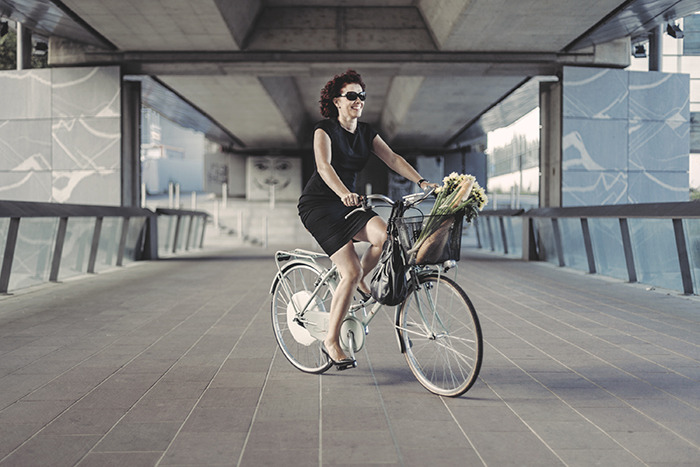 Thoughts, Cycle Ladies and Gents? Is the “Smart” fad more trouble than it’s worth… Smartphones unlocking your precious commuter bike and programming the speeds on your electric-assist rear wheel? Or is it the unavoidable future?

You know my thoughts, with my lack of texting and my dumbphone and all… Chime in with some comments, puh-leeze.