As the saying goes: we went, we saw, we were overwhelmed (as usual)…our Interbike 2013 coverage is drawing to an end, so we wanted to share our overall impressions and thoughts with you. This may be a bit long-winded, but bear with us; as the venue for Interbike is giant and the products on display are legion, so too is describing everything adequately. 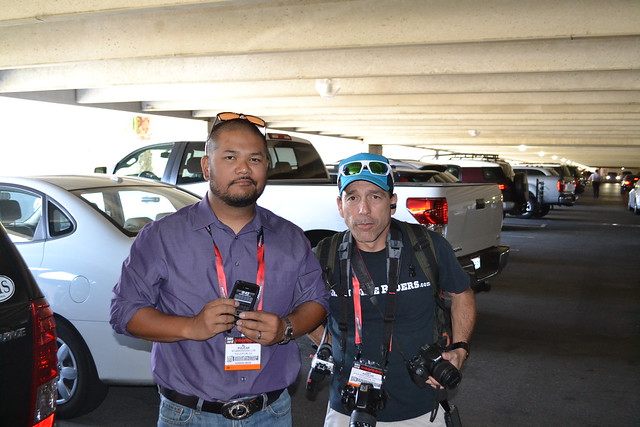 First off, the venue: Interbike moved to the Mandalay Bay Convention Center for 2013. By most accounts, it was a mess — an oddly-shaped hall that was a bit smaller than its previous home at the Sands. Despite a mostly-working smartphone app AND paper maps, we got lost inside about a dozen times. Many others reported the same. Getting lost had its good and bad points; good in that we often stumbled across something we might not have seen otherwise, bad in that we had a very limited time on the show floor this year (one full day and two hours the second day before departing). Getting lost soaked up valuable time, and we wound up missing a lot of stuff we would have liked to see. It’s hard enough to cover the event in three full days…rushing around in less than half that time was a heroic effort for RL, Art, and myself.

Second was the outdoor “paddock” area, where a number of manufacturers were set up. We made it out there ONCE, and mostly by fluke. While the paddock area was clearly visible from outside the facility, once we were on the show floor, it was very difficult to find the access doors to that area. We missed a lot of the fun stuff going on out there…the test track for e-bikes, the race track for the U.S. Crits finals, etc. Our one positive experience was getting to lay our hands on the Motiv Shadow E-bike out there.

Let’s talk about some trends. First, camouflage clothing/accessories . It’s funny; while it popped into my mind that, “hey, there’s a lot of camo stuff this year”, it didn’t really register. Since my spouse is in the military and I live in a mostly-military neighborhood, I am surrounded by camo 24/7 and don’t even think about it. Luckily, our friends at Urban Velo spotted this trend, too: http://urbanvelo.org/camo-is-the-new-black/

Next, disc brakes for road bikes…holy cow, was there a ton of buzz for this emerging technology! Disc brakes started trickling onto the road scene last year, but this year the floodgates were wide open, especially with the development of hydraulic systems that fit into road levers.

How about fatbikes? Love them or hate them, they were EVERYWHERE and everyone was talking about them. We wrote about it here, and even got to try one out. Whether or not you are a fan, it looks like fatbikes are here to stay…at least until the next hot trend appears. And they are pretty versatile; they excel on snow, but they also do a fine job on other surfaces. Add some slick fatties on there and most would serve as a bombproof commuter rig! 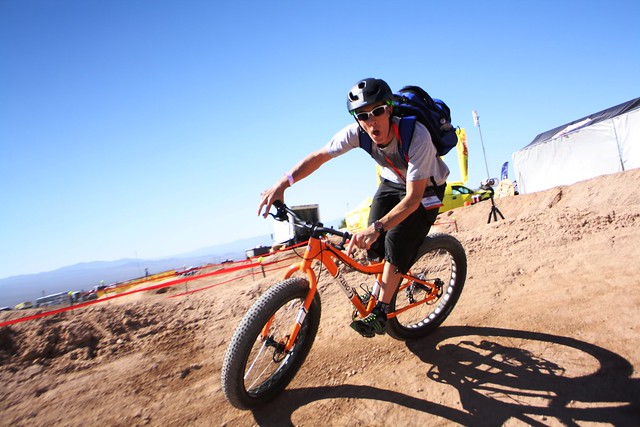 (I love this photo and will post it every chance I get!)

You like bright colors? The bicycle industry has your back…and neons are about as big as they were in the 80s. Neon yellow and orange accents were everywhere, from sunglass frames to bicycle frames, from clothing to helmets. Orange was the really hot color this year…the brighter, the better. 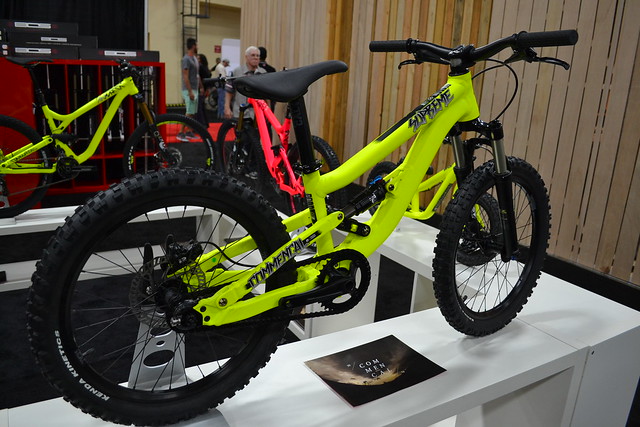 If you’re into mountain bikes, the big news is that 27.5″/650b wheels are quickly replacing 26ers. Some brands have even dropped their 26″ bikes completely in favor of the new (old) size. And, since the wheel size isn’t as radical as 29ers, fewer compromises have to be made in terms of frame geometry…the 27.5″ wheel might truly be the ultimate wheel size for MTBs. Check out our sister site Mtnbikeriders.com for the benefits of that size and lots more Interbike coverage.

As can be expected, lights are getting brighter and brighter and the prices seem to be going down as cheaper battery and LED technology is made available. We saw a lot of light manufacturers with lights for every purpose, and at dozens of intensities. Our friends at Serfas had a model that pumps out 2500 lumens — far more intense than car headlights!

E-bikes are continually growing in market penetration; it’s great to see this segment growing. We saw models with front or rear e-drives, but prefer the ebikes with rear wheel drive. Based on our experiences testing them, rear-drive models are easier to handle/ride and they look better too.

We really like that some of the manufacturers are sticking to the $500-$650 price range for a commuter bike. This price range offers a LOT to most commuters, with many of the models coming stock with fenders and racks and other commuter-friendly accessories. We also noticed (and greatly approve!) that commuter bikes were not relegated to the dark corners of displays…many builders had their commuter lines front and center along with their more racy bikes. That, to us, is the sign of a healthy market segment.

If you like using your phone as a GPS/mapping/ride data device, we noticed that there were a TON of phone mounts for bicycles…lots of new companies producing versatile and innovative mounts for many phones.

One thing we NEVER like: parts and even bikes are getting more and more expensive. It’s too DAMN HIGH!

Finally, after processing everything WE saw and after reading Interbike coverage on a host of other sites, we realize there was SO MUCH we missed. We simply missed a number of great new commuter products, especially Giro’s “New Road” line of casual cycling wear. I think that’s going to be a hit and we regret not getting photos and details to share with you.

For a really comprehensive look at what Interbike meant to seasoned cycling journalists, go no farther than Red Kite Prayer’s analysis of the event. It’s a thoughtful look from folks who are far more expert at analyzing the trends than we are.

We hope you enjoyed our coverage of Interbike 2013…and we plan on bringing you more coverage next year. With luck, we’ll be able to spend more days on the show floor next year so that we can cover more territory.

And, of course, we’d like to thank our sponsors for this year’s Las Vegas Trip. Black Tiger Jerky was very generous in allowing us the funds we needed to travel. Like what you saw here on our coverage? Then PLEASE SUPPORT Black Tiger…they make delicious jerky, and with Christmas coming up, their flavors make great stocking stuffers!