Hey Bike Commuting Ladies and Gents! As you know, the Bike Commuters staff are not about blasting you with Kickstarter bike-related paraphernalia, since gods know that there are fluffy piles of that out there in internet land… like bunnies in a pillow fight, yo. But once in a while, there comes a Kickstarter campaign that tickles our fancy. So we are throwing out some virtual Kickstarter Love for the SHY-SPY GPS/GSM Tracker for Bicycles.

Short of bringing your bike indoors with you on a leash at all times (“What, you’ve heard of guide dogs for the visually impaired? This is my guide bike, and I’m car impaired, okay?“) there comes a time in every bike commuter’s life when they have to address security. Bike theft is a problem in all cities and neighborhoods, despite the cycle-owner’s best efforts. Cycle gators, in an effort to protect their bike offspring, may go so far as to register in free city-wide systems, implant smart locks, or OnStar the hell out of your ride.

So what’s so special about the SHY-SPY? Yet another GPS tracker for your bike… you Cycle Cynics may say, as you virtually (or literally) roll your eyes at this post. Well, let me let them tell you (because copying and pasting is way easier than reading comprehension ;):

When it comes to keeping track of our cycling activity, there are a large variety of choices:

SHY-SPY GSM is our low cost alternative to GPS tracking.

What Mir.I.Am loves about this idea:

Click here for the full SHY-SPY Kickstarter details, non Cycle Cynics and skeptics. Enjoy your week and keep your ride safe, however you can!

Any of you bikey kids lookin’ to cut the sweat out of your long commute? Or maybe you’ve been thinking about e-pimping off your bike, but it just looks too tedious and technical to set up on your own? Well, check out this Euro-stylized invention coming out soon: the FlyKly Smart Wheel!

“We want to make cities more livable, and more people, not car friendly!” – FlyKly on the Smart Wheel

I know there have been a butt-load of Smart-themed kickstarters and new projects out, but check the article if you’re interested. Plus there is gray-themed fancy people on bikes photos for your enjoyment, like this:

Thoughts, Cycle Ladies and Gents? Is the “Smart” fad more trouble than it’s worth… Smartphones unlocking your precious commuter bike and programming the speeds on your electric-assist rear wheel? Or is it the unavoidable future?

You know my thoughts, with my lack of texting and my dumbphone and all… Chime in with some comments, puh-leeze.

Bike Commuters with a love for all things techie, edgy, smart, and sleek: LOCK8‘s kickstarter campaign is coming along with England’s one and only “Smart Bike Lock!” We took a looksie over at their kickstarter pageÂ Â to check out how this crazy gadget all began, and it goes a little something like this:

“At University both our bikes got stolen multiples times. So over a coffee on a sunny day in England, we started talking about bike theft. Surprised that there wasn’t a technologically advanced bike lock on the market, we decided to build one ourselves. We installed our own little workshop, decided not to tell anyone and started drawing, machining, soldering and testing. One year later we are extremely excited about the launch and would like to thank everyone who has supported us! Particularly our families and friends!

Since September ’12 we have been refining LOCK8.”

Unlucky for those two University students, long, long ago, but lucky for SCIENCE! Bike Commuters will be receiving a sample to test out ASAP. This lock seems like it’s a product for a bike commuter that’s riding in areas teeming with thieves, bandits, or pirates. The price point seems TBD… but the concept sounds more bulletproof than anything else on the market. 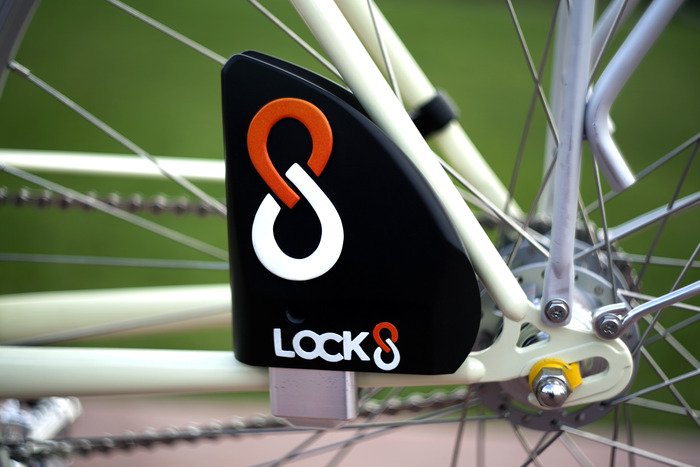 And here’s the obligatory spec run for those readers who are not into clicking links: 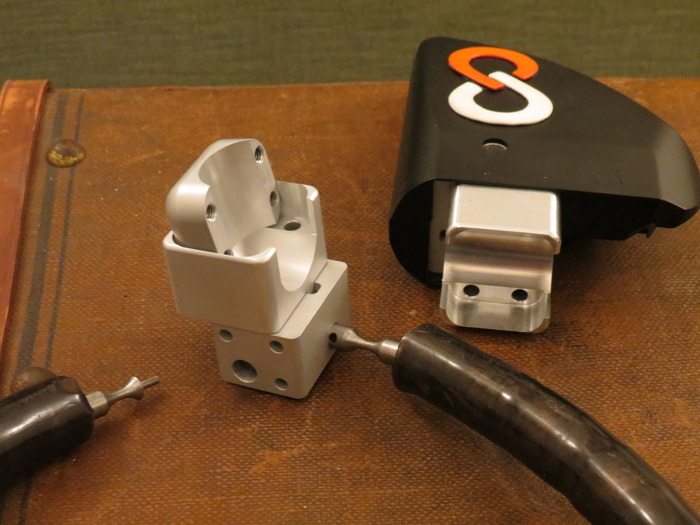 Hopefully we will get our hands on a sample of one of these mo-friggy high-tech bike locks to test out in the name of bike commuting SCIENCE!

My dumbphone and I will not be participating in this little experiment… maybe we’ll test the Ghost Rider by sending him a sample LOCK8 and fake stealing his bike in the middle of the night. Muahahahahahaaa!

You may have noticed that we don’t pitch very many Kickstarter campaigns here — and lord knows we field a TON of them every week. It’s sort of an unwritten rule here at Bikecommuters.com…you want crowd funding? Take it somewhere else.

There are exceptions, of course, and here’s the latest from MonkeyLectric, which happens to make really great bike lights and has been good to us over the years, letting us test prototypes, shooting the breeze with us at Interbike, and advertising here to help us keep the site running.

Along with the lights we’ve reviewed here, MonkeyLectric also makes a “Pro” series light (mostly a prototype/custom-orderable) that is, well, frighteningly expensive. Enter the Kickstarter campaign — seeking a way to be able to mass-manufacture this light system at a better pricepoint:

BERKELEY, CA. MAY 22, 2013 – MonkeyLectric announced today the launch of a Kickstarter campaign to fund manufacturing efforts of its new product, the Monkey Light Pro, a unique bicycle light that utilizes cutting edge technology to allow users to display images and animation on their spinning bicycle wheel. The Pro series is for people who want to get their message out, express their individuality and be seen. The company is using the crowdsource fundraising efforts of Kickstarter to finance the manufacturing, which can be found at http://www.kickstarter.com/projects/minimonkey/monkey-light-pro-bicycle-wheel-display-system?ref=live.

The Monkey Light Pro, a more technologically advanced version of the popular Monkey Light Mini and the original Monkey Light models, features 256 LED lights and 4,096 colors that can be customized into designs uploaded via Bluetooth. Monkey Light Pro also allows users to upload up to 1,000 photos or 90 seconds of video. The Pro series is mounted to the bicycle wheel where it is easily viewed from both sides and multiple angles; the Pro is shock resistant and weatherproof.

Driven by MonkeyLectricâ€™s eclectic backgrounds, the lighting art featured in their namesake product are designed by various graphic and psychedelic artists, including the well known David Ope, and provides riders the ultimate way to express their creativity. When the bike is in motion, it uses the â€œpersistence of visionâ€ effect to display the images that come pre-loaded or created by the users through its open source API.

Previous prototypes and models of the Monkey Light Pro are currently on display at major shows, in museums, as well as in Japan in collaboration with the Fukushima Wheel Project. This particular project utilizes a modified Monkey Light Pro attached to environmental sensors, where light patterns adjust to the levels of environmental pollutants in the area. The Kickstarter campaign hopes to make the product more accessible to developers, artists and the general public.

â€œOur first Kickstarter campaign allowed us to establish our own manufacturing line here in the USA,â€ said Dan Goldwater, MonkeyLectricâ€™s CEO. â€œThe success of that campaign helped us create 3 new jobs, make fixed capital investments in machinery, and relocate to a larger facility. With this campaign we hope to continue to invest in our manufacturing capabilities and make the world’s most advanced bicycle display system available to the market.”
During the campaign, Monkey Light Pro will be available to the first twenty pledges for $495, forty at $595 and 100 at $695. The price point after the campaign will be $895.

The Kickstarter page for the new Monkey Light Pro can be found at: http://www.kickstarter.com/projects/minimonkey/monkey-light-pro-bicycle-wheel-display-system?ref=live

MonkeyLectric was founded by Brown graduate and MIT scientist Dan Goldwater in 2008 and is the leader in fun and visible bike lighting. Based in Berkeley, California, the small company aims to make cycling fun and visible. They created the Monkey Light to be make to make riding at night just as fun as during the day. Over the top creativity and tongue in cheek marketing campaigns have put MonkeyLectric on the map, and all products are proudly made in the USA. Learn more at http://www.monkeylectric.com.

Just to give you an idea of how amazing the Pro light system is, check out this video that showcases the capabilities:

Are you concerned your lights make you visible from the front and back – but not the side? Have you ever wished for lights on your helmet… but not wanted an expensive lighting system with an annoying cord and battery pack? Does it occasionally occur to you it might be nice if passing drivers could see your head, not just your rear? Do you think “too many lights” is still just a few lights away? 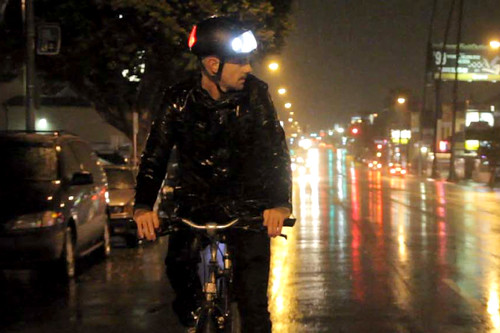 If your answer to any of these was yes, Nathan Wills of Los Angeles just may have you covered. He’s got a helmet up on Kickstarter with integrated front and rear lights that are also visible from the side – a critical area many light manufacturers virtually ignore.

Right now it looks like Nathan has a good working model, but needs a cash infusion to make it a reality. Like most Kickstarter projects, you can contribute as little or as much as you want… but $80 will get you a helmet (in red, black, or white) that’s CPSC certified, offers adjustable dial fit, has some cool lights, and makes you look like a commuter instead of a racer. Assuming the funding happens (which I’m hoping it will), the cost will rise to $100 later on – which is maybe a bit pricey, but not really any more than a decent helmet and a decent set of “be seen” lights will set you back, so I think it works out.

I personally wouldn’t ride with only this helmet for light – and in many states it’s the law to have lights mounted to your bike after dark – but I think it’d be a pretty nice addition. Here’s hoping the final versions (expected in October 2012) are as awesome as they look!

H/T to James at Bicycle Design.