So as I previously mentioned, I’ve been riding the WTB Freedom Cruz 29er tires on my Redline Monocog 29er – and I’ve now got enough time logged on them for a review! 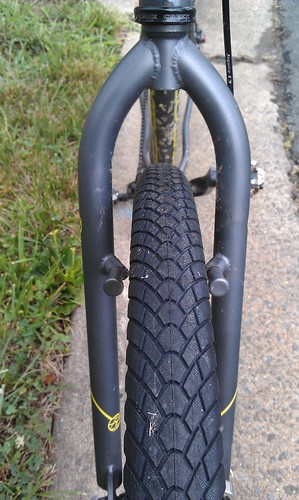 The basics: at a 29 x 2.0″ size (they come in 26″ as well), these are not for your typical city bike or hybrid! Per product description, they’re meant to “turn your 29â€³ dirt-crusted steed into a quick and nimble commuter workhorse.” While in general I prefer to keep my mountain bikes on mostly dirt, I had the bike available and a new bike I was riding more, so on the tires went!

A (rather technical) caveat up front: these tires are mounted to Mavic A317 rims, which only have a rim width of 17mm. WTB recommends (per the tire sidewall) rim widths of 25mm+ (which is somewhat standard – but not universal – for mountain bike rims). So right off the bat, my experience with handling may be different than someone else’s, as a wider tire on a narrower rim doesn’t hold its shape quite as well as a wider tire on a wider rim or a narrower tire on a narrower rim. I never felt super comfortable on these on sharp turns – but that might change quite a bit if they were used with the recommended rim size.

Now back to riding impressions!

After a couple months of solid riding, I can definitely say the Freedom Cruz fits the bill for commuting! Very smooth-rolling for sure. They also seem to track well on surfaces ranging from pavement to hardpack dirt – I wouldn’t want to try them out in a lot of mud or loose dirt, but on smooth surfaces they work well (wet or dry). The suggested tire pressure is 35-65psi – after some testing, I ended up running the rear at 40psi and the front at 35psi (this for an average guy+gear load of around 160-165lbs). I also found that the tires held air pressure pretty well – I only had to add a small amount of air every couple weeks. My typical experience is that I need to add a more significant amount of air once a week, so this was a pleasant surprise. It may simply be due to the lower pressure – tire pressure on my other commuter bikes ranges from 55psi to 100psi – but it was nice nonetheless.

The hard rubber compound and sidewall on the Cruz did seem to lessen the bump-absorption properties normally associated with wide tires to some degree – I think most of my mountain tires provide a bit more cushion than these do. However, they do seem durable – after about 350 miles of riding I can’t really see any signs of wear.

For the price (MSRP is $33.99 per tire and they can be found for $6-10 less), the Freedom Cruz 29 tires are a very reasonable way to convert a mountain bike into a smooth-riding city bike. They aren’t overly beefy, and once I had my bike up to speed I felt like it took very little effort to keep it at speed. If you’ve got an extra MTB sitting around and want to give it some new life, $50-60 can get you a tire that will give you a smooth ride for a long time… and the all-black styling means your “mountain” bike won’t be hurting too bad for street cred even without the knobbies! 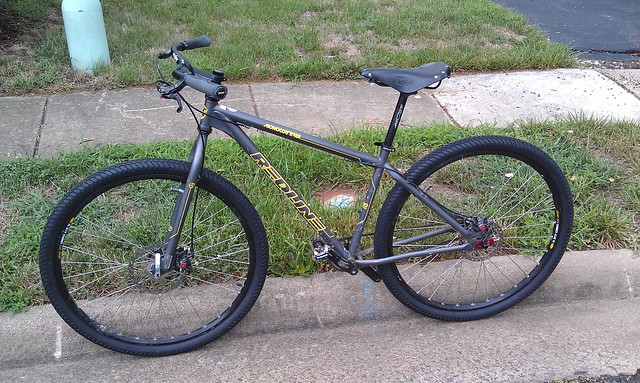