Chicago bike commuters are gearing up for Bike Winter with a “Make It Reflective Workshop” this upcoming Monday, December 5.

As posted on the event listing:

Have Fun While Making You and Your Bike More Visible!

Join us for our annual Make It Reflective Workshop:
Learn about passive vs. active visibility, get tips on what to use and where to place it, update your favorite coat or bag with extra-sparkly visibility.

Who: Experienced cyclists who sew will help make both you and your bike the most obvious moving vehicle on the road.

Cost: $5 (donations are greatly appreciated to help defray the costs of materials).

This workshop is the second one this season; I missed the first one held on November 6 – just in time for the time change and onset of more darkness.

And such an event is just one of many events already on the Bike Winter calendar.

It’s that time of the year … when I create my annual calendars. All proceeds from the sales of these calendars directly support the Chicago Ride of Silence, especially our efforts to locally promote in the Midwest region. Last year’s 2011 calendar sales were great and I have another batch of three calendars for 2012!

In addition to the “Bikes Around Town” calendar, I have “Chicago” and “Flowers in Bloom” calendars, too. All calendars are printed on-demand and shipped directly to you!

Added bonus — buy 2+ calendars and save 50% with code GIFT4THEYEAR. Bikes Around Town calendar also available via the online retailer BikeSweets.com.

Thank you for supporting safe bike cultureâ€¦one photo at a time!

A few months ago, the classic bike enthusiasts at Velo Orange sent us a sample of their new Polyvalent crankset to test out. As I had just moved from the flatlands of Florida to the rolling hills and valleys of the midwest, I was “voluntold” to be the reviewer. 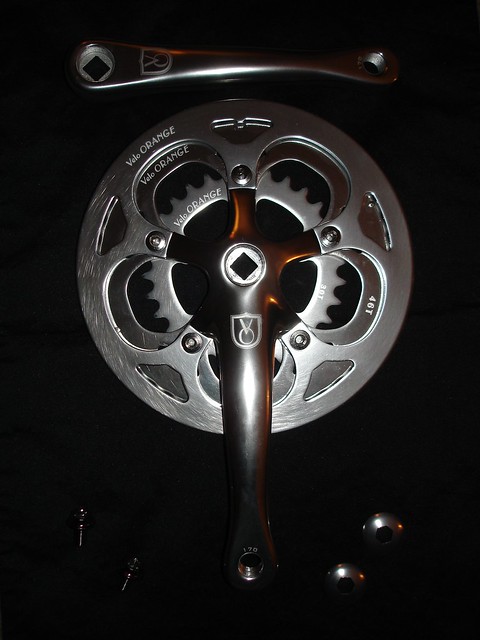 First, a little about the cranks themselves, straight from VO’s description:

The wide range Polyvalent crank has 46/30 rings and comes with a high polish alloy chain ring guard. The 46/30 rings give almost the range of a triple when used with a wide cassette, while the chain ring guard helps keep your pants clean. This is a great crank for city bikes and utility bikes.

The crankset is a standard JIS square taper interface and takes a 118mm bottom bracket spindle. I wound up using a 122mm spindle on my test platform, a salvaged Puch road bike-turned-dedicated-commuter. That extra spindle length helped clear the splayed chainstays of the Puch. The crankset is finished in VO’s signature “high polish”, which I always refer to as “high satin” when I try to describe the finish to someone who has never seen it. The cranks/chainrings have small and tasteful laser logos etched onto them. This crankset comes with nicely-made domed dustcovers and the spindle fixing bolts. The chainrings are lightly ramped and pinned for smooth shifting, and the included chainguard should keep many commuters happy as it negates having to roll up a pant leg to stay grease-free. 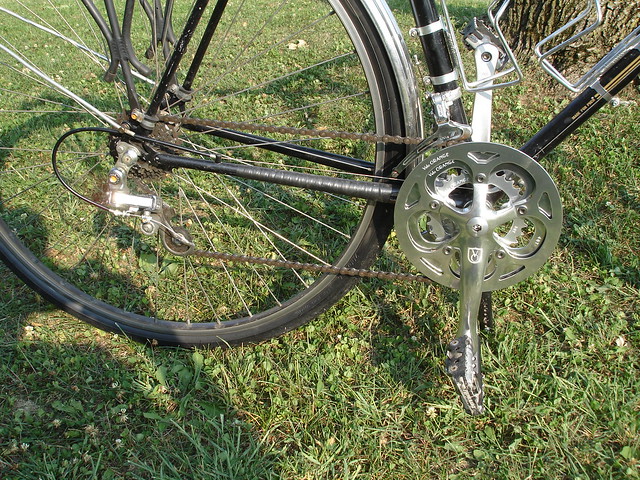 For those of you familiar with compact cranks on traditional road bikes, this crankset operates in much the same way. With a 16-tooth jump between large and small chainrings, this provides most of the range of a triple crankset without the extra complexity and fussiness of shifting that come with three rings. My test platform was set up as a 1×7 prior to installing the Polyvalent crank (44T chainring, 13-26 7-speed freewheel). That gearing setup was ok for Florida, even with a largish load in my panniers. Once I got to Ohio, though, I was simply outgunned…while the hills aren’t high here, there are a lot of them and many of them are quite steep. The Polyvalent crank solved my hill problem quite satisfactorily…cruising around the flats on the 46T ring and dumping the chain to the 30T when the road tilts upward. In fact, I enjoy this range so much that the Polyvalent crankset is in the process of migrating to a touring bike that I am building…one with a true “wide range” cassette (11-34 9-speed). I should be able to conquer mountains with that gearing range, even with a full camping/grocery load.

There have been a number of reports of compact cranksets having problems with overshifting inward past the inner ring — after all, a 16-tooth jump is a bit extreme. The Polyvalent has the same 16-tooth jump between outer and inner rings, and things are further complicated by the need to place the front derailleur above the chainguard to avoid interference. Nevertheless, I experienced no overshifting with this crankset. Careful setup of the limit screws on one’s front derailleur helps, and those users still concerned with overshifting can install a simple chainwatcher inboard of the inner ring. Avoiding abrupt “panic shifting” from outer to inner probably helps, too.

Although VO doesn’t mention it anywhere in their description of the Polyvalent cranks, one of the tabs on the chainguard makes a handy bottle opener. Take a look at the 12 o’clock position in the photo below, and rest assured this crankset has you covered if you’re itching for a post-ride beverage. 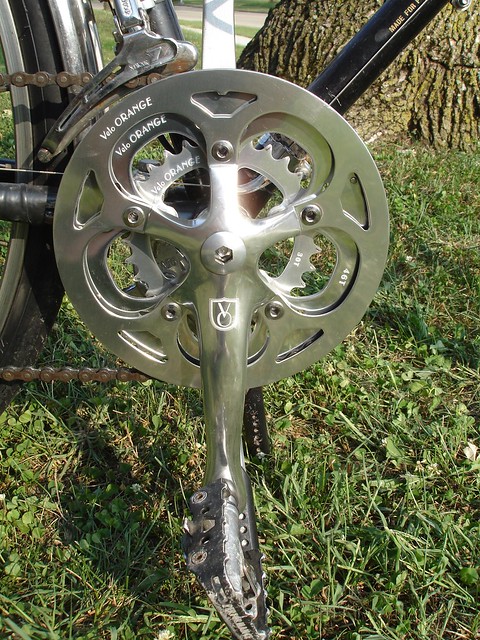 Velo Orange makes a lot of really nice, reasonably priced components…all with classic lines and great finishes. The Polyvalent cranks are no exception, and they are well worth the retail price of $105.00. And, if you’re not in the market for a crankset but really like the idea of a chainguard, VO sells a similar chainguard separately.

Visit the Velo Orange online store page for other components and accessories, and take a look at their blog for some interesting reading about product development and classic bike design.

I spotted a good essay in the Santa Monica edition of Patch today in my Google News feed. In the essay, there is some discussion of the Santa Monica City Council’s bold Bicycle Action Plan and the ribbon cutting on a new high-capacity bicycle parking facility (the largest in the nation at 360 spaces).

The essay goes on to talk about how bicycles fit into the global economy and the author states:

What I donâ€™t think our society has quite come to terms with yet, is how drastically economic, ecological, and cultural shifts will be shaping our transportation reality. These emerging shifts are demanding more serious consideration for bicycling in urban transportation. Riding a bike will be viewed as an increasingly logical response for people trying to manage our high levels of unemployment, stagnant wages and climbing fuel and food prices.

Some of it is preaching to the choir, but the way the author lays out his case is worth a read. Take a look at the full essay by visiting the Santa Monica Patch page here.

As noted in the South Florida Times,

The program will feature bicycles equipped with computers to track mileage, calories burned and carbon offsets. Riders will be able to monitor their personal fitness, see their contributions to the county’s green efforts and connect with others online at broward.bcycle.com. To check out bikes, residents and tourists must register on that Web site or at bike sharing stations in various locations around the county.

B-cycle is a partnership among Trek Bicycle, Crispin Porter+Bogusky and Hu-mana, which is Broward B-cycleâ€™s presenting sponsor.

Plans for the program reached a high point on Oct. 26, when the Broward County Commission approved an agreement for B-Cycle to manage and operate the local bike sharing program.

The full South Florida Times article can be viewed by clicking here.

There is no indication of how many bikes will be available in the cities of Hollywood, Fort Lauderdale and Pompano Beach, but according to the map on the Broward B-Cycle page, there will be over 20 stations, all within a few miles of the coast. That should help ease congestion in some of the most heavily-populated coastline in the U.S.

I am eager to hear how this goes, and if stations are in good locations…any south Florida readers out there who can help us make heads or tails of the map on the B-Cycle page?