Oooh this one really irritated me…

One time I was riding my bike home and I noticed a motorized scooter traveling on the road. Mind you, I’m in the bike lane and he’s on the car lane. The car lane suddenly hits traffic, then the knuckle head jumps on to the bicycle lane!

This picture was the best I could find that depicted my story. Obviously I wasn’t in India when this happend.

He kept going in and out of the bicycle lane when ever it was convenient for him. I started getting really mad so I tried my best to chase him down on my fixie. But I couldn’t since he was going up to 40 mph. Oh man, if I had caught up with that dude, I would yelled at him to get off my lane!

Yeah I know it’s not a good idea to be Mr. Confrontational, but this dude really ticked me off.

What would you have done, if you had caught up to him?

Ok, for those of you that have already forgotten what the hand signals are. Here’s a little refresher.

Now that I look closer at this picture, I’ve never used the Alternate Right signal….

Sorry, this bike is gone.

You’ll get the frame, chain,fork with headset, and wheel set for free! I’m keeping the cranks.

All you have to do is pay for shipping. The typical shipping cost to send a bike is anywhere from $30-45 dollars. They charge so much because of the size of the box. None the less, its FREE! I forgot to mention, the head badge says…”Schwinn Chicago”

The bike is waaaay to big for me. I believe its a 60cm frame. It’s perfect for a Single speed or Fixie conversion.

If you’re serious, please shoot me an email. HERE.

That the Vice President of Marketing, Wayne D. Gray commutes on a KHS F20-R folding bike. I hear he lives pretty darn far too!

This is Wayne riding one of their new “Green” bikes.

Much respect due to Mr. Wanye D. Gray of KHS Bicycles! Now that’s what I call leading by example. Or should we say, riding by example!

A tip I learned from Service Manager, Wayne Kardol of Jax Bicycle Centers in Fullerton…

Apply Silicone Spray all over your drive train and especially on your chain rings. It will make your transitions from one gear to another rather smooth. But then again if you’re running a fixie, it wouldn’t really matter…aaaah what the heck, go on, treat your fixie drive train to some TLC! 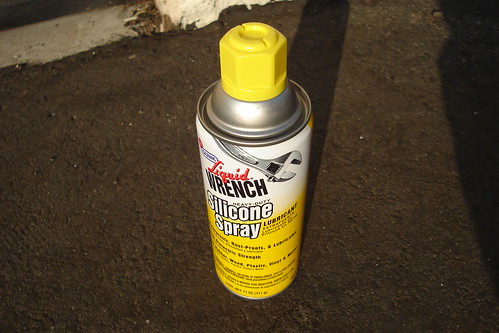