To Helmet or Not to Helmet; that is the Question.

Actually, it’s not that simple. The issue of bicycle helmet use and practice is complex. That probably explains why no one agrees on it and also why we will argue about this until the end of time.  Admittedly, I am a bicycle helmet advocate. I use one myself. As a physician, I see many head injuries from bicycle accidents; many without helmets, some with. And as I researched for this article, I started appreciating the complexities of bicycle helmet use.

What follows is an overview of the main points of contention that I have encountered in my readings. It is neither an argument for or against helmets. As a free thinking adult, you must decide for yourself, unless you live in a helmet-mandatory region. 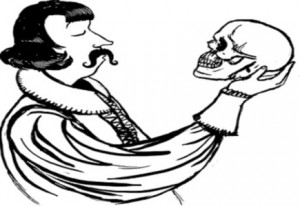 From a theoretical standpoint, helmets make sense. Much like an airbag for your head, a helmet reduces the extent of deceleration that your head and brain experience when an impact occurs.

The lower the magnitude of acceleration (or deceleration), the lower the force experienced, meaning less injury. There are standards for designing helmets, which are met through testing. These include drop tests involving blunt impact as well as penetration tests with sharp objects. These tests are often performed at different temperatures, in different moisture conditions etc, in an attempt to simulate reality. But of course, these are simulations.

Consider the following when a bicycle accident occurs in the real world:
1. Condition of the helmet (is it already broken, is it the right size, fit)
2. The way a helmet is worn
3. The speed at which a person is riding
4. The type of object and speed of the object into which the bicyclist is colliding (an 18 wheeler going 40 miles an hour vs. a wooden fence)
5. What parts of the body gets injured in the accident (a helmet is not going to protect the cyclist from chest or abdominal trauma). 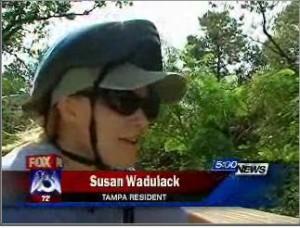 These are just some of the issues that can make a huge difference when we are considering the question of whether or not bicycle helmets translate into real-world benefit from head injury.

As a thought experiment, let’s consider two worlds, A and B, both in which everyone correctly wore new helmets and were 100% compliant with their use.

However, in world A, 90% of bicycle accidents involved collisions with 18-wheelers travelling an average of 80 MPH. I can almost guarantee you that a bicycle helmet will make zero difference in preventing head injuries and fatality; with or without a helmet, chances are you will have a devastating head injury if you are involved in such an accident.

Compare that to world B where there are no motorized vehicles, the roads are soft and cushioned, and no one rode above 8mph. Helmets would probably make minimal difference in this world as well; with or without a helmet, chances are you will have no head injury if you are involved in an accident.

Somewhere in between these two extremes is a ‘sweet spot’ where helmet use makes a significant difference in preventing head injury. Where that sweet spot lies on the spectrum of bicycle accident severity remains elusive. 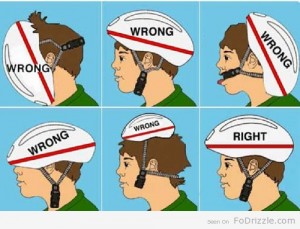 Show Me the Evidence

So on that note, can we definitively prove or disprove that wearing helmets prevents significant head injury in the world we live in today? The short answer is ‘probably not, and probably never.’ Why? Because we cannot run randomized controlled trials (RCTs) to assess whether or not helmets can statistically significantly lower head injury rates.

Briefly, a RCT is an experiment commonly used in assessing new interventions (e.g. medications) to treat specific diseases. Basically, people with a certain disease are randomly assigned to one of 2 groups: one group that takes the new medicine, and one group that gets a ‘control’ treatment or placebo. At the end of the trial, the outcomes are assessed, i.e. how many in each group are cured. Statistics are then run to see whether or not the new medicine significantly cures more people than the placebo.

To run a RCT on bicycle helmets would be unethical.[i] Such a trial would involve randomly assigning people into two groups, one with helmets, one without, then making these people ride their bicycles into planned collisions. Outcomes would then be assessed, i.e. how many in each group develop head injury, how many end up in comas, how many people end up dead.

Instead of RCTs, what we have are case-controlled studies (a type of retrospective study). Basically, the study looks at cases (people with head injuries following bicycle accidents) and controls (people without head injuries following bicycle accidents).   The cases and controls are then compared based on the exposure, in this case, helmet use. The study then calculates an odds ratio comparing the odds that a helmeted rider ends up as a case versus a control. It is important to note that such a study can only suggest causality and never prove it.

On this note, a recent Cochrane review [ii] found 5 well designed case-control studies and analyzed the data from these 5 studies. They found that helmets provide a 63 to 88% reduction in the odds of head, brain, and severe brain injury for all ages of bicyclists. Helmets provided equal levels of protection for crashes involving motor vehicles (69%) and crashes from all other causes (68%). Injuries to the upper and mid facial areas were reduced 65%.

The main problem with retrospective studies is that an innumerable number of confounding factors can mess with the data, which is why these studies can never prove. For example, one confounding factor might be that people who wear helmets just tend to be more careful and less reckless compared to those who chose not to wear helmets. Therefore, by being more careful, the helmet wearers may have been less prone to accidents in general, or at least less prone to accidents that required a trip to the ER. 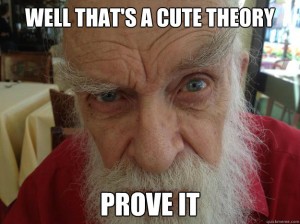 Currently, mandatory helmet laws are enacted for people of all ages in Australia, New Zealand, Finland, several states in the U.S [iii]., and Canada, while the Netherlands only enforces a helmet law for competitive cyclists [iv].

Mandatory helmet laws are far more prevalent for minors in the U.S. and around the world, and for the most part this issue is not as contentious, perhaps because there is more powerful evidence to suggest greater benefit for minors than helmet use in adults.[v] Furthermore, some policy makers would argue that minors may not yet have the ability to make an informed decision about the issue.[vi]

It is the debate over these laws that is particularly engaging because it not only involves the argument of the utility of the helmet itself but also of the encroachment on freedom and liberty.

In a 2012 editorial in the Journal of Medical Ethics, Hooper and Spicer[vii], two authors from the UK, argue against the idea of a mandatory helmet law in the UK. Salient points in their article include their cited figure that overall bicycle related death and injury in the UK in 2008 made up a small fraction of the total number of bicycle related casualties (104 deaths and 2606 injuries out of 17,064 reported cycling accidents). As such, a nationwide mandatory helmet law might end up costing more to implement than would benefit the UK public at large.

Another point that Hooper and Spicer bring up is whether or not a mandatory helmet law actually deters people from cycling, whether due to the financial burden of having to purchase an additional piece of equipment, or the sheer inconvenience of having to wear it before each ride. They mention this point in counter to a 2008 Cochrane review, [viii] which found that mandatory helmet legislation did increase the use of cycle helmets and decrease the head injury rate after implementation. Hooper and Spicer argue that the studies included in this Cochrane review did not look at the total number of cyclists on the road after the mandatory bicycle law was implemented.[ix] Indeed it is conceivable that helmet laws may in fact reduce the total number of cyclists on the road, thereby decreasing the overall frequency of bicycling accidents. This is a point that the Cochrane review article also concedes.

Australia potentially illustrates this phenomenon of lower numbers of cyclists after mandatory helmet laws. When helmet laws were passed in the early 1990s, cycling trips in fact decreased by 30-40% overall. Furthermore, a recent survey from University of Sydney found 23% of Sydney adults would ride more if helmets were optional, which is a significant number given that only about 15-20 per cent of Australians ride regularly.[x]

Interestingly, a ‘safety in numbers’ trend has also been shown such that the injury rates for each cyclist in a given area is lower when there are more cyclists.[xi] This might be because with more cyclists on the road, drivers will be more accustomed to driving safely with cyclists. So decreasing the number of cyclists on the road, even if because of a mandatory helmet law, might end up hurting us in the long run.

The Other Effects of Helmets

The effects of helmets may not just be physical, but also psychological. It has been proposed that drivers may be more cavalier in their driving habits when they drive around helmeted cyclists[xii], one explanation being the faulty logic that a helmeted cyclist is more protected, therefore drivers don’t have to be as careful around them. On the flipside, a cyclist might actually feel that with a helmet on, he/ she is more protected and so is more prone to cavalier cycling habits [xiii].

Other Factors as Important

A recent 2014 paper from Denmark[xiv] reviewed such factors, and determined the most significant ones that are associated with bicyclist injury. Being that Denmark is certainly one of the leading nations in the international cycling community, I found the findings of this paper particularly interesting. However, as mentioned above, this is also case controlled, so it doesn’t prove anything; it just reveals associations. Furthermore, being that it looked at data from Denmark, the noted associations may or may not correlate with other parts of the world. The following is the list of factors listed in this paper: 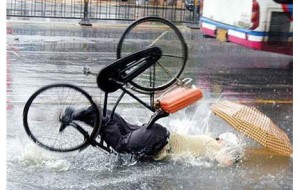 I haven’t given you any proof of anything. But I would still recommend a helmet. They can be pretty inexpensive; and even the most expensive ones for me have costed $90 each. I usually keep a helmet for a good 3-4 years, by which point one of the straps breaks, translating to $20-$30 a year. Not unreasonable. For me, I have already formed a habit of it, so it’s easy to continue wearing one. If you live in an area without a mandatory helmet law, then it’s your decision.

In terms of other factors, try to ride in quiet areas with low speed limits if you are starting out and unsure of yourself on the saddle. Be wary when riding in wet and slippery conditions. Be wary of cars turning left into you as you ride through intersections (for right sided driving areas).

Do good and ride well.

[viii] Macpherson A, Spinks A. Bicycle helmet legislation for the uptake of helmet use and prevention of head injuries (Review). Cochrane Database Syst Rev 2008;(3): CD005401.

[ix] Macpherson A, Spinks A. Bicycle helmet legislation for the uptake of helmet use and prevention of head injuries (Review). Cochrane Database Syst Rev 2008;(3): CD005401.

[xiii] Hilman M. Cycle Helmets: The Case for and Against Them. London: Policy Studies Institute, 1993.