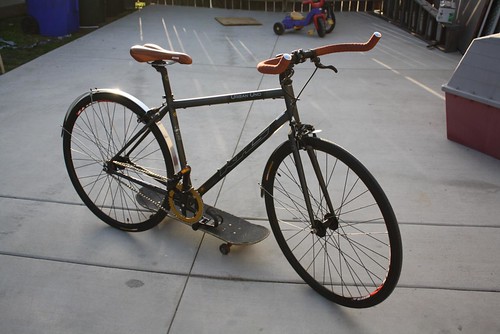 If you believe that “Commuter Bikes” should be multi-geared, have fenders, racks and a chainguard then click here. If you are looking for a simple to maintain, fair weather “singlespeed commuter bike” that has a little bit of flair, then read on. 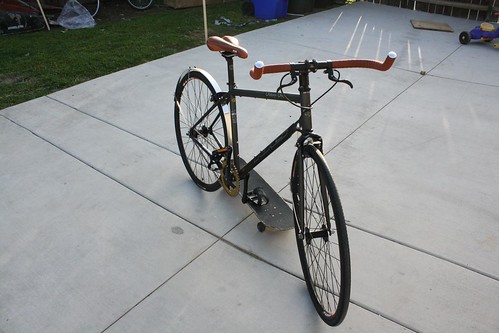 KHS Bicycles have always offered a big selection when it comes to “Urban” bikes; the KHS Urban Uno is one of their three singlespeed/fixed gear offerings. The Urban Uno comes with decent specs such a 520 Reynolds DB CrMo Frame, a CrMo Fork, 44t Gold crankset and alloy fenders.

Here is the full spec sheet:

I’ve always been a fan of singlespeed bikes, since my commute is flat and I live in sunny SoCal, the Urban Uno is perfectly suited for my ride to work. Singlespeed bikes are also easy to maintain, lighter and there are no derailleurs to adjust. 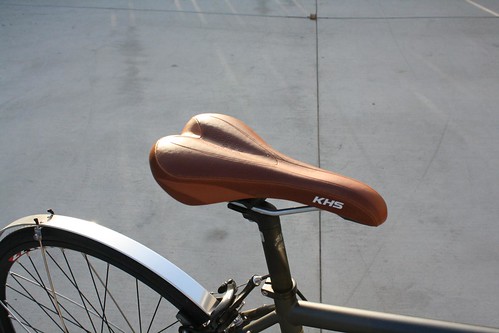 You may love or hate the KHS Urban Uno’s style; I actually like it. It does not scream vanilla Singlespeed or hipster fixie bike. The geometry of the bike was comfortable, the cockpit didn’t feel tight nor too stretched out. I was pleasantly surprised that the saddle was very comfortable; some OEM saddles tend to be too hard and fall in the numb nuts category. The cowhorn bar is another love/hate affair; although stylish, they do lack more than two hand positions. I’m not a toe-clip type of rider, but I gave the Wellgo pedals a chance — unfortunately, they sucked so I swapped them for my Crank Bros Quattro pedals. 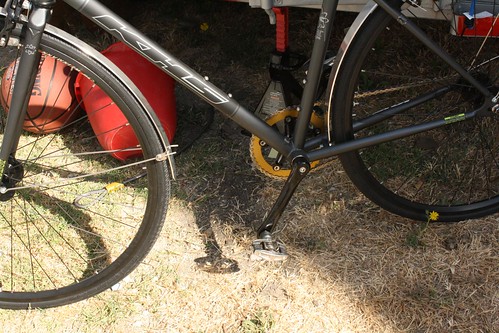 The fenders that come with the KHS Urban Uno do serve a purpose; they did a great job when I rode over little puddles of water, but I doubt that they would do very well in a downpour. My ride takes me across a couple of railroad tracks; the rims and tires always gave me a good sense of confidence and their durability was not an issue. The Kenda Kontenders are a great choice of tires for those of us who commute. I never got a puncture and they seemed to roll rather fast. 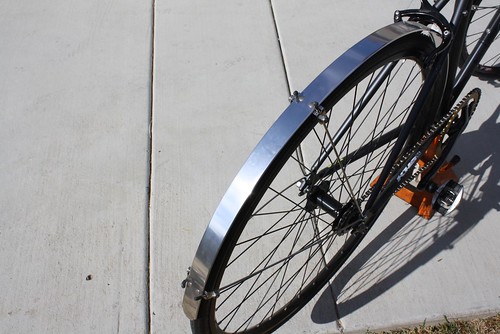 For those who would like to add a rear rack, the Urban Uno does come with eyelets, but you may have to get longer screws since the fenders will be sharing the same holes at the dropouts. The Urban Uno’s frame also has room for your hydration needs; it comes with two sets of threaded bosses for your water bottle holders. Another feature of the Urban Uno is that if you want to go fixie style, you can. Although the fixed gear cog is not provided, the rear hub is threaded for one. I did not get the chance to ride the bike as a fixed geared bike.

The MSRP of the bike is at $489.00, if you are looking for a singlespeed commuter, the Urban Uno is certainly worth a look

The new flyers for the 2010 Bicycle Bash by the Bay appeared today…this year’s event is at Flatwoods Park in Hillsborough County (just NE of the University of South Florida campus). The Bash will be held November 7th from 10AM-4PM, and you can be sure I’ll be there to provide coverage of SW Florida’s premier bicycling event. 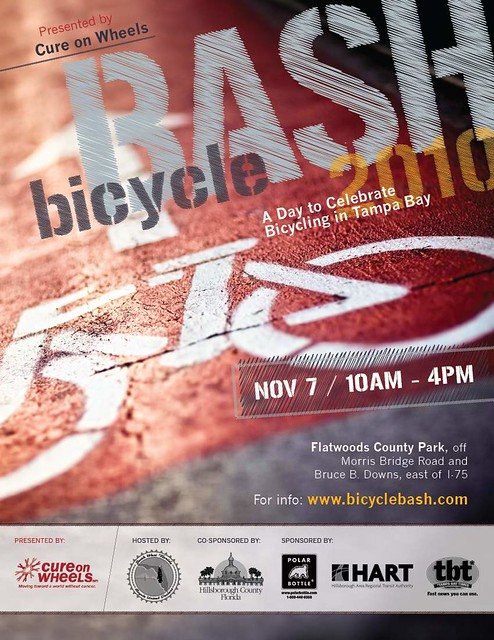 Well, Eurobike — Europe’s largest bicycle trade show — kicked off yesterday, and as many of you know the U.S. equivalent Interbike is coming up in a few short weeks.

A few of us are signed up and ready to go for our annual coverage of Interbike for Bikecommuters.com and our sister site Mtnbikeriders.com…this will be the first year that I get to join RL and Moe and the other folks from Mtnbikeriders.com. Now that we’re signed up to attend, we’ve been getting bombarded by dozens of previews, press releases and invitations to vendor meetings at their respective show booths. It’s a great “sneak peek” at what we can expect at the show.

Overwhelmingly, the press releases for both Eurobike and Interbike focus on so-called “urban commuting” bikes (less racy, more practical) and electric/electric-hybrid bikes. Supposedly, this is the big year when E-bikes reach a sizeable market penetration into the U.S. They’re already wildly popular in many Asian countries and there is a decent market in Europe, but currently they still hold a tiny percentage of the U.S. interest. That’s fixin’ to change, if the PR is accurate…

What do YOU think? Are E-bikes going to take off here in the U.S.? Are there still too many skeptics here? Rest assured, we’ll be taking a look at the offerings at Interbike and sharing our thoughts with you…and will hopefully get to report on some promising technologies. Stay tuned!

You may have read about the following elsewhere, but it is worth sharing here, too. Our friend Frederick sent a link to an article on Wired’s site about a novel concept in city bike-sharing setups. This one is from a startup in New York City called Social Bicycles (SoBi) and operates without dedicated kiosks or other infrastructure, and at a fraction of the per-bike cost of other bike-sharing schemes like Velib or B-Cycle. And, it has some really cool features that make the setup eminently user-friendly.

SoBi doesnâ€™t use cycle stations; the bikes are parked throughout the city (starting in New York) at regular racks. Bikes could, in fact, be anywhere at any given time, not just at a designated station that could be blocks away. Users can grab any bike that isnâ€™t already reserved and drop it off anywhere. No need to search for a drop-off station.

Like a Zipcar, each SoBi bike has its own â€œlockboxâ€? (shown above) that communicates wirelessly with SoBi servers via GPS and a cellular receiver (an H-24 module from Motorola). When you make a reservation online or via smartphone, a map displays all the bikes in the area and gives you the option of unlocking a specific bike by clicking on it.

If this scheme is successful, such technology and the relative ease of the setup may encourage other cities to try their hand at bike-sharing.

Over the past year it’s been our goal over at UtilityCycling.org to catalog all of the means in which cyclists utilize bicycles for purposes beyond sport and recreation. Not surprisingly, all evidence points to bike commuting as the predominant form of utility cycling throughout the world.Â  Digging up information (mainly scouring the Internet and talking to our friends in the bike biz) bike commuting is always on the front of the spectrum of all the ways that people do something useful with their bicycles.Â  That said, when it comes to the variation in ways that cyclists have come up with for using their bikes, bike commuting just scratches the surface of the tip of the iceberg.

More so than any other common use of the bicycle, bike commuting has the magical effect of opening up the mind to the utility of the bicycle. While this mind opening experience certainly happens for some while training for a bike race or riding just for fun, the daily grind of making ones way back and forth to work contains some special inspiration which other forms of cycling may not conjure up.

Bike commuting is about getting something done.Â  If you can accomplish the task of getting yourself where you need to be, why can’t you accomplish other tasks with your bicycle as well?

Bike commuting asks for some changes in lifestyle and planning.Â  This shift can be blamed on the way that the automobile lifestyle and its inherent costs are ingrained in most of us.Â  There are plenty of costs and difficulties built into the automobile lifestyle, but the predominance of the lifestyle make this just seem like life.Â  On the surface, when shifting over to bike commuting, it first appears that you are adding to your load of costs and difficulties in transportation.Â  It is difficult to appreciate that these challenges are leading down the path of partially or perhaps completely offsetting the costs of operating and maintaining an automobile.Â  Part of embracing bicycle commuting involves the embrace of a gradual shift in resources towards a more efficient and beneficial mode of transportation. Embracing bike commuting with this mindset, is a fundamental step towards embracing the bicycle for a multitude of other purposes.

With a plenitude of inspiration, bike commuters have their mind pumps primed for investigating multiple different ways to use their bicycles.Â  So what directions do bike commuters branch out into empowered by thier two wheeled utility machines? After bike commuting, I don’t think I would be to far off in guessing that bicycles used for general transportation and family cycling are the next most prevalent forms of utility cycling.

At UtilityCycling.org, we’ve looked at general bicycle transportation as all of those trips in between the gaps of bike commuting.Â  Our “general” list includes getting around, groceries & errands, bicycling while traveling and long distance travel.Â  Getting around along with taking care of groceries and errands with your bicycle are in many ways as significant uses of the bicycle for many people as is bike commuting.Â Â  Traveling with a bicycle and long distance travel with a bicycle is a much smaller subset of Utility Cycling but a quite interesting one at that.

By family cycling, we mean all forms of utility cycling where the kids are coming along for the ride.Â  This could be bike commuting or grocery shopping with the kids in a bike child trailer or going to the movies with kids and parents all riding their own bikes.Â  Beyond utility family cycling, recreational family cycling is foundational in developing a culture that respects and utilizes bicycles.Â  Families having fun with bicycles together is incredibly important to cycling advocacy as it teaches children the importance and fun of cycling and is encouraging and sometimes enticing for non-cycling enthusiasts to see.Â  It also is a healthy, fun and economical alternative to many car-bound family recreational activities.

From the most obvious forms of utility cycling, inspiration flows for more creative and entrepreneurial purposes.Â  Bicycle messengers are heart and soul when it comes to combining the entrepreneurial ethic with cycling.Â  Small package delivery is a task that without a doubt can be performed better with a bicycle

In the age of the specialist, the bicycle has sometimes been turned to as the most efficient tool for achieving specific purposes.Â  My favorite recent example of an adoption of the bicycle for a specialty task is the Google Mapping Bike.Â  Other examples I’ve enjoyed learning about are a variety of emergency service bikes.Â  We’ve written about Fire Service Bikes, EMS Bikes, Police Bikes and Search and Rescue Bikes.

Josh Lipton is the editor of UtilityCycling.org as well as founder and President of BikeShopHub.com a network of online specialty cycling shops.