For those of you in the Tampa Bay area, a message from our friends at the Southwest Florida Bicycle United Dealers (SWFBUD). The rest of you are off the hook:

This is unacceptable and SWFBUD (South West Florida Bicycle United Dealers) is asking bicyclists and park users to join a 5-mile bike ride to the county building on July 16 to tell the commissioners to Keep Flatwoods Open 7 Days a Week at a budget hearing at 6 PM in downtown Tampa.

SWFBUD is announcing a “Keep Flatwoods Park Open 7 Days a Week” Bike Ride from the Seminole Heights Garden Center at 5800 Central Avenue to the County Government Center for the first Budget Hearing on July 16. Email your contacts and tell others.

5PM: Meet in front of garden center on Central Avenue, a half-mile north of Hillsborough Avenue. Lots of space to park if necessary.

5:30PM: Reach county government building in downtown Tampa and sign up to speak.

Send an email to hcbudget@hillsboroughcounty.org

And show up July 16 at 6PM at County Government Center to speak at the hearing.

I have contacted the offices of all 7 County Commissioners and the aides for each commissioner provided the following information:

Rose Ferlita: Not available. Will get back to SWFBUD possibly tomorrow.

Al Higginbothom. Supports not raising taxes. Looking for money to restoring those two days by knocking out “dead weight” in the budget and streamlining and cutting other areas. “We’re trying to put money back to parks and see if cuts whether in other places.

Jim Norman: Jim is going to look to do everything he can to keep it open.

Mark Sharpe: Eric the aide is getting a lot of requests and it’s an issue to be determined. “We’re getting hit on it on a daily basis. We hit a nerve on this one.”

The more the merrier…let’s save this county gem from the budget chopping block!

Way back at Interbike 2007, Moe spotted an intriguing line of bicycles new to the market…check out his photos from back then by clicking here. Jango, a subsidiary of bicycle accessories juggernaut Topeak, has a pretty neat concept going on, and we were eager to get our hands on their products.

Well, after much speculation and hand-wringing, we were finally able to score a test model just less than two years after Jango introduced the bikes at Interbike! Sometimes things move with strange timing in the bike world… 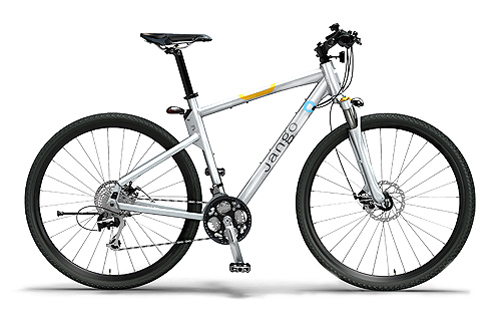 The concept is very cool: what if buying a bike was like going to a car dealer? What if you could walk into a shop, select a bike from a range of models and then select pre-configured “trim packages” or choose dedicated accessories from an extensive menu, all based on your needs? Jango offers seven bike models, nine preconfigured “trim packages” and a list of over 30 unique accessories. That’s a lot to digest!

Our test bike is the 7.1. Here’s a little bit about it from Jango’s website:

With the bike, we also got a large case of assorted accessories, from cargo-carrying bits to lights, security gear, fenders and a computer. We’re going to have a lot to share, so I’ll try to break things down into a series of articles covering the bike itself, the accessories and the overall experience.

In the meantime, check out Jango’s website for a good overview of their concept and their wide range of models, trim packages and accessories. And stay tuned…the test riding has already begun!

Apologies for all the Long Beach Sharrow posts, but this really is cutting edge stuff and I’m sure more than a few people are curious to see how it will all play out. Firstly, there was a lot of speculation on how cars/bikes would react to the green stripe. Would cars somehow mistake them for a bike lane and not drive in them? Would traffic come to a grinding halt because the street would be flooded by hundreds of beach cruisers? 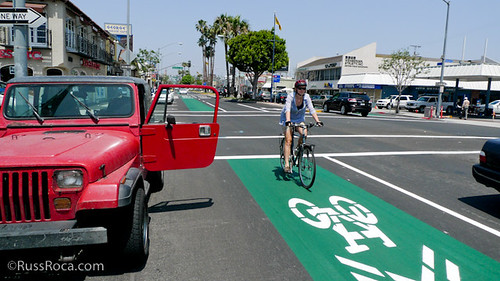 It’s still a bit too early to tell, but so far, it is not the Armageddon that many (myself included) would think would result. It’s plenty obvious that cars are still driving in the right lane. For me, it seems that motorists have gotten over any trepidation about riding in what could be mistaken as a bike lane.

Have the hundreds of closet bicyclists taken over the streets of Belmont Shore? Not quite. Casually observing, ridership seems to be about the same. Good riding practices (not riding in the door zone) seem to be just perceptibly better, though there are many people that STILL ride too far to the right. I was riding someone today and told him gently that it might be safer to be in the actual green stripe. When we were at a light, he said, “You ride in the green stripe Poindexter and get yourself killed.” As I rode away I could see him in my mirror hugging the parked cars and ducking in and out of open parking spaces.

A lot of criticism about the markings have been from the conjecture that traffic is just too great to have bikes and cars in the same road. I shot some video of Laura and I riding to the supermarket and we rode through Belmont Shore where the sharrows are. It is a .6 mile stretch. It took us 7 minutes to ride through it. That means we were averaging 5mph! As you can see from the video, there may be a lot of traffic, but it’s certainly moving at a speed that a cyclist can keep up with! If we’re going to die of anything in the video, it’s BOREDOM from having to stop every 20 feet.

Furthermore, because it is a shopping district, it behooves cyclists to be in the middle of the lane to avoid parking cars and swinging doors.

Lastly, I’d like to show this video that a fellow Long Beach bike advocate made. Some of the footage is on 2nd Street pre-sharrow. I ride the same way and believe in vehicular cycling principles. That is to say, that I believe cyclist fares best when he/she rides like other vehicles. I feel that for those that haven’t been exposed to vehicular cycling classes, the sharrow/green stripe treatment is a good visualization for good lane positioning. I am hoping that people that use the sharrow/stripe treatment will at some point have an “Aha!” moment and realize that they can ride like that on every street and be safe.

It’s too soon to tell what will happen. The paint is barely dry. People can be slow to adapt to change. I think the sharrow/stripe treatment has some flaws. Visual confusion is among them. The city could have done more extensive PR on the project with mailers, more community education, etc., However, despite all that, I am still very excited and very hopeful about the design.

In case you wanted to know what it was like to ride down our big green stripe : )

Today as Laura and I rode through Belmont Shore in Long Beach, we were greeted with what almost every cyclist dreams of – the proverbial yellow brick road for cyclists – a painted lane with Sharrows, that says in no uncertain terms – Bikes Are Welcome Here.

Behold. The Big Green Stripe in all its glory. 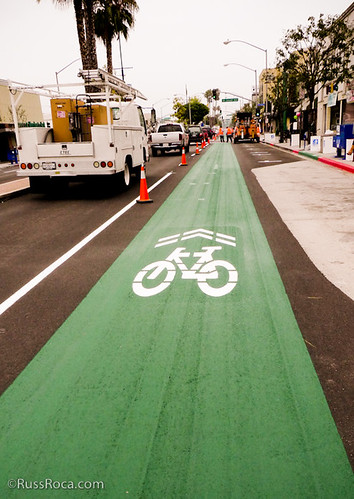 It was a long time coming and many of us had reservations about how it was going to be executed, but I think it came out beautifully. 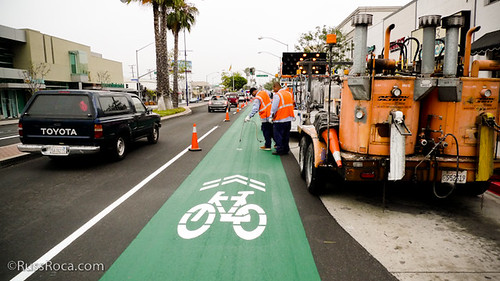 However, not everything is perfect. There is still the public backlash to such a bold and progressive move to contend with. Already, many residents of the area are up in arms -questioning the safety of the sharrows. Like the fellow in this video that interrupted when I was interviewing our city’s new mobility coordinator, Charley Gandy.

To be clear, sharrows are mere reminders that cyclists have the right to be on the road. They are not bike lanes. They do not take real estate from motorists and confer them to cyclists. As a cyclist , you’re not getting any special privilege. Simply, your RIGHT to be in the road and to be in the center where it’s safe is just writ large.

It will be interesting to see how this all unfolds in the coming weeks. I’m expecting lots of heated debate from motorists, residents, business owners and so-called “cyclists”. Ah, we live in interesting times.