We got a press release from Peopleforbikes.org the other day:

Last month, we asked you to contact your U.S. Senators to oppose Oklahoma Senator Tom Coburn’s plan to strip funding from the Transportation Enhancements program, which is the main source of the federal investment for bike projects of all types. Peopleforbikes.org supporters and our allies generated more than 75,000 emails to Congress in 48 hours. This rapid and powerful grassroots response succeeded: Mr. Coburn withdrew his amendment and crucial funding for bicycling was preserved.

We are sorry to report today that bike infrastructure funding is under serious and immediate attack again â€“ this time in an amendment proposed by Senator Rand Paul (KY) that would redirect all funding for Transportation Enhancements to bridge repairs. Mr. Paul’s amendment is set for a Senate vote Tuesday, Nov. 1.

While we are all for bridge repairs, gutting the Transportation Enhancements program is not the way to get the job done. We must defeat this amendment and we need your help. We need you to contact your state’s two U.S. Senators today and ask them to oppose this amendment. Here are four reasons why:

1. Everyone deserves to be safe. We agree that we must keep our bridges safe, but the lives of pedestrians and bicyclists are important too. Nearly 5,000 Americans die each year biking or walking on our nationâ€™s roadways.

2. Reallocating bike funding won’t make a dent in the cost of bridge repairs. Even if every penny of Transportation Enhancements money is diverted to bridge repairs, Senator Paulâ€™s plan would still take 80 years to fix the backlog of bridge repairs we have today.

4. States don’t spend all the money they already receive for bridge repairs.

This is the third attempt in a month by a small group of Senators to target Transportation Enhancements, using a different angle each time. It is a waste of the Senate’s time and taxpayers dollars to focus on eliminating this modest, cost-effective, valuable program when we are in dire need of real and viable solutions to fix our failing transportation system.

Please contact your Senators today to ask them to vote against the Paul amendment (SA-821) to eliminate Transportation Enhancements. (You can find your Senators, review basic suggested text for your email, and send your note directly from this link.)

Thank you for your help today, and for passing this call to action along.

If you’re in an email-writing mood, let your elected representatives know how you stand on this. Time is short; the Senate is scheduled to vote on it Tuesday, November 1st.

We wanted to wish everyone a happy and safe Halloween! 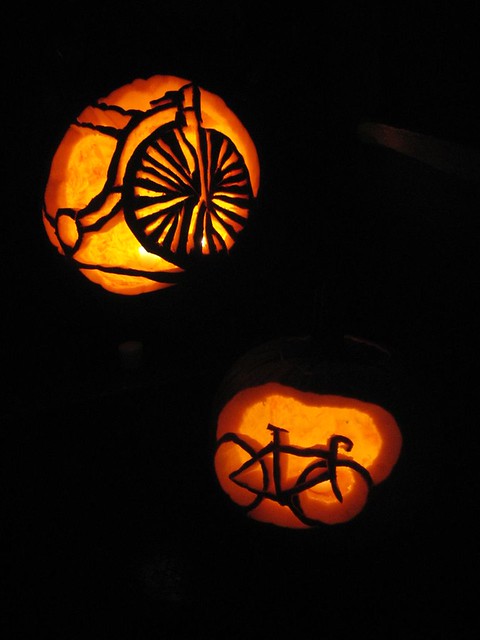 Anyone got a bicycle-themed costume to share? We would love to hear about it in the comments below.

Chicago’s Alderman Richard Mell (33rd Ward) proposed licensing bikes during recent budget hearings. Hearing the story on the news last night, it sounded like this suggestion is just one of many being proposed by the the City Council to close the city’s budget gap. I do have a suggestion – enforce the laws already on the books, namely the bans against driving while on your cell phone or texting. I’m sure there are other options… like this commentary to license shoes, too.

Watch the news report or read the latest news article.

During my commute yesterday from one meeting (out of my office) back to my office I realized I wasn’t wearing my sunglasses. I had them with me for the earlier commute to my meeting; where had I left – er… lost – them!? I called co-workers to please check around for my sunglasses – both in the space where we’d met and out at the bike racks, but everyone came up empty handed.

I felt lost this morning without my usual gear. It’s just not a good feeling to lose something you like.

I just happened to be back at that off-site meeting location again this afternoon so I looked around again. On my way in, I thoroughly inspected the bike rack area and even kicked around the leaves, thinking maybe the glasses had gotten hidden by the foliage. Then I retraced my steps indoors.

On my way back out, I again retraced my steps, arrived at the bike racks….. and look what I found! 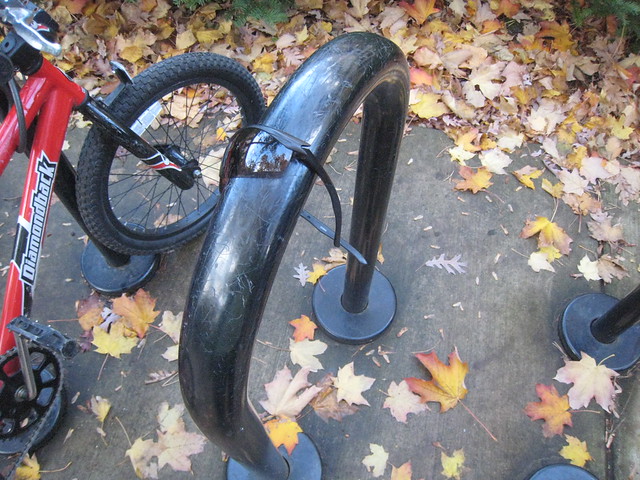 Feels so good to find what was lost.

A few weeks ago, I had the pleasure of receiving a review copy of It’s All About the Bike: The Pursuit of Happiness on Two Wheels by Robert Penn (New York: Bloomsbury, 2010). The book is the retelling of the author’s quest in obtaining a custom, handmade bicycle, and I hate to gush so early on in a review, but I LOVED the tale. 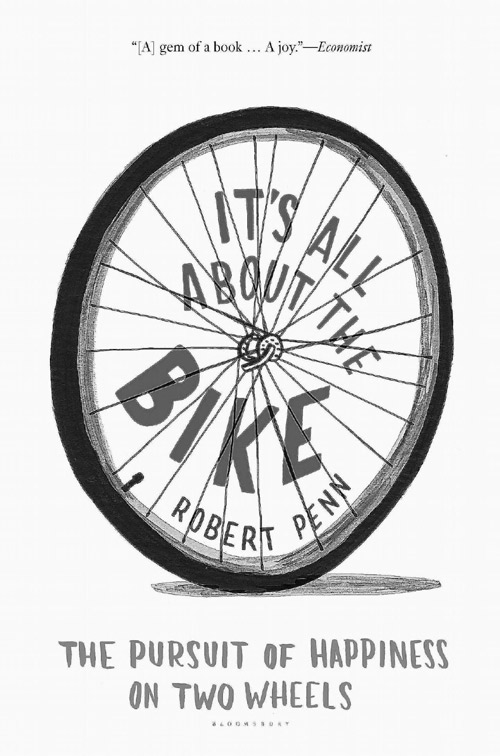 Many of us, myself included, have long dreamed of a bicycle handmade to our exact specifications…with just the perfect geometry and handling, the hand-chosen parts, and the overall aesthetic hammered out over months and years of fantasizing. Even for a longtime bicycle collector like myself, the following passage resonated with me…Penn has just described his current fleet but:

With this small troop of hard-working bicycles, my bases are covered. Yet something fundamental is missing. Like tens of thousands of everyday cyclists with utilitarian machines, I recognize there is a glaring hole in my bike shed, a cavernous space for something else, something special. I’m in the middle of a lifelong affair with the bicycle: none of my bikes even hints at this…I need a talismanic machine that somehow reflects my cycling history and carries my cycling aspirations. I want craftsmanship, not technology; I want the bike to be man-made; I want a bike that has character, a bike that will never be last year’s model. I want a bike that shows my appreciation of the tradition, lore and beauty of bicycles. The French nickname for the bicycle is La Petite Reine — I want my own ‘little queen’.”

And with that, Penn sets off on a whirlwind journey to get his “little queen” made: alighting on the doorstep of renowned bespoke builder Brian Rourke Cycles, traveling halfway around the world to procure a set of wheels from Steve “Gravy” Gravenites (and getting to ride down Repack with Gravy and MTB legends Charlie Kelly and Joe Breeze!), getting rare factory tours at Chris King Precision Components in Portland, Continental in Germany and both Cinelli and Campagnolo in Italy, among other stops. At each stop, Penn delves into the history of bicycles and the development of various components and technologies that we now take for granted. Penn’s coverage of the history and lore of the bicycle never bogs down the story; in fact, these tidbits enhance the tale and show that Penn truly respects everything having to do with these two-wheeled wonders.

It’s All About the Bike is a quick read…”engrossing” is a word that comes to mind. Perhaps the idea of a custom bike can be seen as an extravagance, and I can understand that. Penn’s tale is more authentic than that, however. Never once did I feel that Penn was simply a wealthy man looking for something expensive to incite jealousy among his peers; rather, here is a man who put in the miles on many other bikes and earned the privilege of being able to fulfill his dreams of a handmade, perfectly-fitting machine that he would then ride with abandon all over the globe. Penn’s storytelling skill is refreshing and honest and his love for the bike carries throughout the book. I’ve recommended a lot of books over the years; in fact, sometimes it is hard for me to remember a book I really disliked. Nevertheless, It’s All About the Bike stands out as a passionate, fact-rich and thoroughly enjoyable read for anyone who loves the artistry, history and craftsmanship of a good bicycle. Pick up a copy for your favorite cyclist for Christmas…they’ll thank you for it!