We just got these in on Tuesday and before we make it available to the general public, we want to give away a pair of our first ever, WOOL SOCKS!
BikeCommuters.com Wool socks feature a reinforced toe and heel and a 4″ cuff to keep your ankles and Achilles tendons warm. With these wool socks, your feet will be comfortable and dry, mile after mile, whether riding or just hanging around even in colder weather! Wool blended with Lycra for stretch and reinforced with nylon at toe and heel.

To win, all you have to do is leave a comment below. Depending on how many entries we receive, we’ll pick a random number that coincides with that comment and BAM! You’ve got yourself a pair of socks! Only 1 person will be picked. Staff members are not eligible. 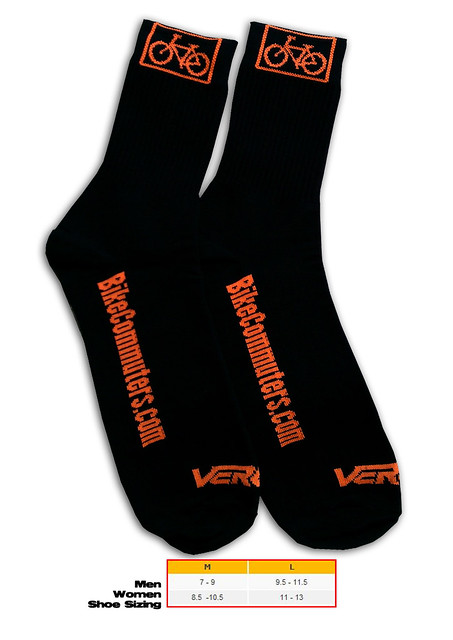 There are a large number of books targeting new commuters…some good, some bad. A few months ago, the publishers of The Urban Cyclist’s Survival Guide (Chicago: Triumph Books, 2011) offered to send us a review copy. Authored by James Rubin, an L.A. based journalist, and Scott Rowan, a Chicago-area commuter and writer, the book intends to be a primer on the ins and outs of bicycle commuting…hoping to attract new riders to try this two-wheeled transportation thing.

It’s not a rosy picture, however. Start with the cover: 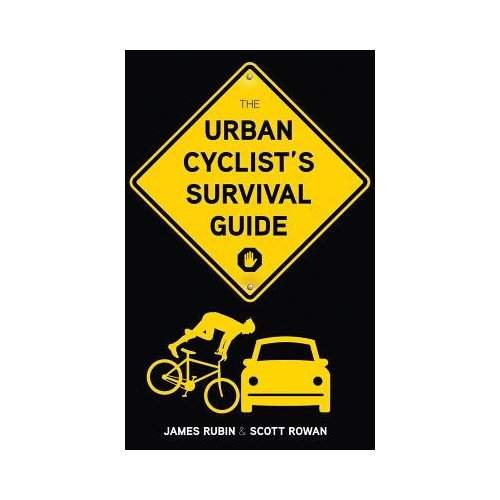 If a book wants to attract people on the fence or new to the bicycle commuting world, why on EARTH would the authors/publishers choose such a disturbing image for the cover? My hackles were already up, and I’d barely cracked the spine of this book.

The book is divided into the chapters one might expect from such a guide: clothing, choosing a bike, safety issues, accessories, repairs and more. Nothing new here, but there is a good overview of the main issues and logistics in starting to commute by bike. Where this book really falls off the tracks is the authors’ insistence on circling back to the many possible negatives — theft, angry/dangerous motorists, breakdowns on the road, more angry/dangerous motorists, common collision scenarios and the like. I tried to read the book as if I was brand-new to the idea of riding a bike for transportation (a difficult mindset to put myself in, I know), and I was left with a feeling of dread: “man, this bike commuting thing sounds like a genuinely dangerous pain in the ass!” To be fair, many of the concerns and issues raised in the book are important for new (and seasoned) commuters to understand, if nothing more than to avoid such scenarios. But, the tone of the book is very off-putting. Yes, it can be hectic out there on the streets of the U.S. Yes, motorists and cyclists historically have had some issues getting along together. Yes, collisions can happen despite caution and preparation. Repeatedly harping on and on about it, though, drives away those people who might have considered bikes but are still making up their minds. As such, this book is a failure when it comes to providing that last bit of encouragement to a new commuter.

And that’s a shame, really, because the book DOES have a lot of good information, tips and resources contained within it.

One personal pet peeve is the authors’ use of the plural “we” and “our” to describe the events of a single person. During the authors’ visits to several L.A.-based bike shops, they were trying to determine how shops went about getting a rider on an appropriate bike. In one, a FitKit was used:

“For the FitKit, we stood on a nice piece of polished wood that looked like a shoe measure. The board had two holes at one end, and Carretero inserted a roughly 18″ aluminum tube that connected vertically to another piece of wood. The device resembled a surgical cane. Carretero unfastened a lock, and the wooden top rose steadily until it pressing firmly but not painfully into the bottom part of our crotch. We were 55 1/2 centimeters, which he dutifully wrote on a piece of paper.”

See what they’re doing there? I have no idea if this is grammatically correct (somehow I strongly doubt it), but it’s annoying as hell.

In all, the book fails on a few levels for me. As I mentioned earlier, there is a host of useful information in The Urban Cyclist’s Survival Guide, but too much time and effort is spent on the perils and fears that the “good message” comes through dimly. As it stands, I have a very difficult time recommending this book to anyone. There are a number of similar books on the market that are better suited to giving new commuters the tools they need to hit the streets. In fact, it’s ironic in that in this book’s resource guide, the authors call out MY personal favorite for a similar guide — The Practical Cyclist — by my friend Chip Haynes.

The Urban Cyclist’s Survival Guide retails for $14.95, but it is available on a certain online bookseller for as low as $10.00. If you’re trying to bulk up your cycling library, by all means, snap up a cheap copy. Otherwise, hang onto your money and spend it wisely elsewhere.

What pedals would you use to escape the Zombie Apocalypse?

What’s up busy Bike Commuters… I woke up groggy with a chance of grumpy this morning, hoping a shot of caffeine and a leisurely bike commute would snap me out of it. Â I stumbled around the darkness in my apartment looking for my bike shoes like a zombie looking for a 20-pack of McBrains Nuggets. Â When I finally retrieved my shoes, I shoved them on, only to realize that someone else had also taken a liking to my shoes over the weekend. Â Zombie ANTS! Â A mini-ant-party was going down in the toe of my right shoe. Â Nasty!

One can of Raid later and a change of socks left me riding to work in a pair of ballet flats on my little Shimano M520 pedals. Â Lucky for me, the commute is flat and only lasts around 10 minutes. Â I still enjoyed myself and the ants did snap me out of it! Â BUT, it lead me to think about a possible pedal conversion – platform on one side and spd on the other? Â I’ve always liked my M520’s, easy to clip in because it’s double sided, CHEAP, and reliable! Â Perfect for a beginner clippie-shoe rider like myself.

My “back home for the Holidays” bike had leather straps that I removed because I kept dragging them on the ground face down. Â My Kona Dew bike had metal stock platform pedals that suited me just fine. Â And Â I’ve never come around to the one side only fancy road bike pedals, since I prefer the recessed SPD cleat in my Specialized Riata Shoe. Â Anyway Bike Commuters, Â what’s your preference for pedals? Â What’s your pedal history and Â your related footwear? Â Dress shoes, casual shoes, MTB shoes, road shoes, incognito Chrome Kursk kicks? Â When it comes down to the Zombie Apocalypse, I’ll want those SPDs to help me crank up the hill to escape my fate as a Zombie buffet. Â I’m not ready to give up the SPD, but sometimes it would be nice to ride in a dress shoe without the feeling of a steel-dipped Chicken Nugget pressing into the ball of my foot… What’s your perfect pedal set up?

If you’ve missed your chance at ordering a limited-edition Bikecommuters.com t-shirt at a reduced rate — time is running out.

As of this morning, we have a handful of smalls and a handful of XLs. Mediums and larges are sold out. So, if you’re pipsqueaky or Herculean, we’ve got you covered…simply use the PayPal ordering button below: 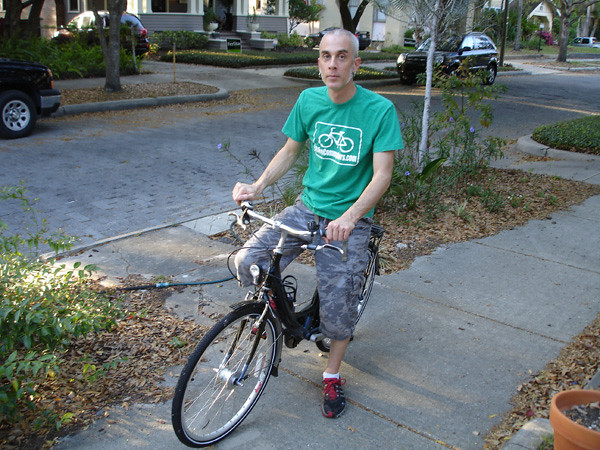 Thanks to all of you who ordered shirts…they’ve all been shipped via USPS and should be in your hot little hands already (if not soon).

Here’s an interesting bit of news to share on this beautiful, spring-like Monday:

Leaders of the Alliance for Biking & Walking, Bikes Belong, and the League of American Bicyclists Leaders met in San Diego, on February 13-14th and have issued a joint statement announcing they are to merge.

It was agreed that uniting the three organizations would dramatically improve their effectiveness in increasing bicycle use in the US.

Richard over at Cyclelicious brings up a variety of interesting points and things to consider with such a merger — concerns about the overall message of the new “super advocacy group” and how the various players might get along (or not). It’s worth a read, so swing on over to Cyclelicious to check it out for yourself.

Your thoughts on this merger? Drop ’em in the comments box below.