One of the reasons I was really eager to get an Xtracycle was so I could schlep my son around town — he’s outgrown his tow-behind trailer and seemed willing to try something new.

So, I thought I’d make the rig a little more “passenger-friendly”: a nice padded area to sit on and a place for the passenger to grab onto.

For the pad, I used interlocking floor mats as the raw material. These mats are available all over the place (big box DIY stores, chain stores, etc.). We had a few of them laying around in our shed just waiting to be repurposed. Using the Xtracycle’s Snapdeck and a big mixing bowl as templates, I traced the shape I wanted onto the back of a sheet of the foam. Then, I cut it out using a common utility knife. I figured three thicknesses would be nice and cushy, and I had multiple colors on hand, so I went with a “Rasta” theme. 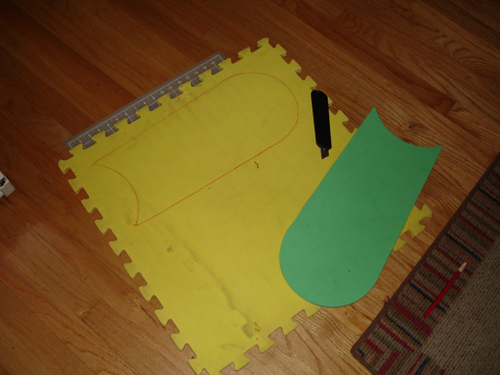 I laminated the three pieces together by spreading Liquid Nails project adhesive between them (using a putty knife to get the adhesive right up to the edges) and stacking overdue library books on them to hold them in place while the adhesive cured. I then used more of the adhesive to mount it to the top of the Snapdeck.

Once the adhesive was all the way cured, I knocked down the sharp edges of the foam pads with a sanding disc, shaping the edge to a radius similar to the edge of the wooden deck. It feels quite nice on the tush and inner thighs!

The next modification was to add a handlebar for the passenger to grip. This was easy — I used a spare pair of handlebars and a threadless 1 1/8″ stem I had in my parts bins and some shims cut from a soda can. Simply pull out the seatpost of the bike and clamp the stem onto it, using shims as needed to make sure the assembly won’t move around. Piece of cake! 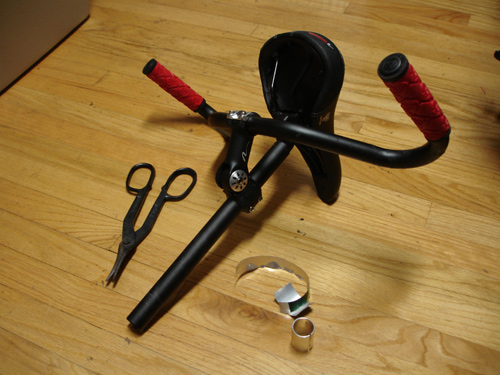 One consideration is what handlebars to use. As I discovered once I bolted everything together, an old pair of moustache handlebars curved forward too much, hitting me in the backs of the legs as I pedaled. That just wouldn’t do, so I dove back into my parts bins for a pair of “chop ‘n flops”…a vintage 3TTT “Merckx” handlebar that had been butchered by a well-meaning but misguided friend. Still, only the finest Italian craftsmanship for my passengers!

The total cost of these projects was $11.00 — and that was for the WTB grips I used (my son HAD to have red grips, his favorite color). Everything else I had on hand. Even if you had to go out and buy some of this, the raw materials are extremely cheap…the only real expense would be a stem and bars if you don’t have spares laying around. 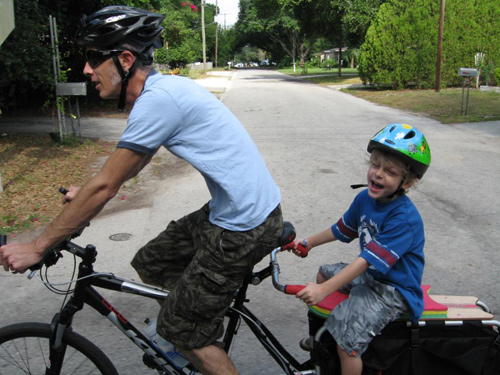 My boy loves riding back there — he gets a better view of the world and it really helps him feel like he’s growing up — no more “baby trailer”, as he calls it. And, he got to select some of the appointments for his new perch…pretty red grips and a red pad to protect his butt.

For some other cheap Xtracycle mods, check out:

and RL’s “Bike on a Bike” carrier.

Well, we rolled the dice with a new web host company, and it looks like we achieved the same result: CRAP!

We are now running on a backup server and we hope to be fully functional soon. Meanwhile, we are working on some cool reviews and we will be giving away the Day6 bike, so keep coming back!!! Aside from 1.5 mile rides to college, I have been biking to work on and off since Feb 2006. I really didn’t start regularly biking to work until April of this year tho, due to a change in city and job.

I really enjoy biking, and like to do it every chance I get. I also have a tendency to be overweight, and riding a bike more is a whole lot more palatable than eating less (palatable–get it?). My current commute is just a little bit over 8 miles each way if I go the more direct route, I have been known to increase it to 18 each way if I had other errands to run though.

I recently had an appendectomy after starting my new job–my old health insurance lasted 60 days, my new insurance took 90 to kick in, and I was in the hospital on day 67. The going price for that procedure in this area is around $42,000. I managed to get it down to more like $17k, but I can still definitely use the money I’m not spending on gas.

Other benefits–definite weight loss benefits. There is a very good feeling that comes with discovering you have to wear a belt with pants that used to be uncomfortably tight. If course, the increased size of the quads means that if I buy a smaller waist the pants will fit even worse, but I would say that a belt is indeed a small price to pay. I dropped 50 pounds one year. 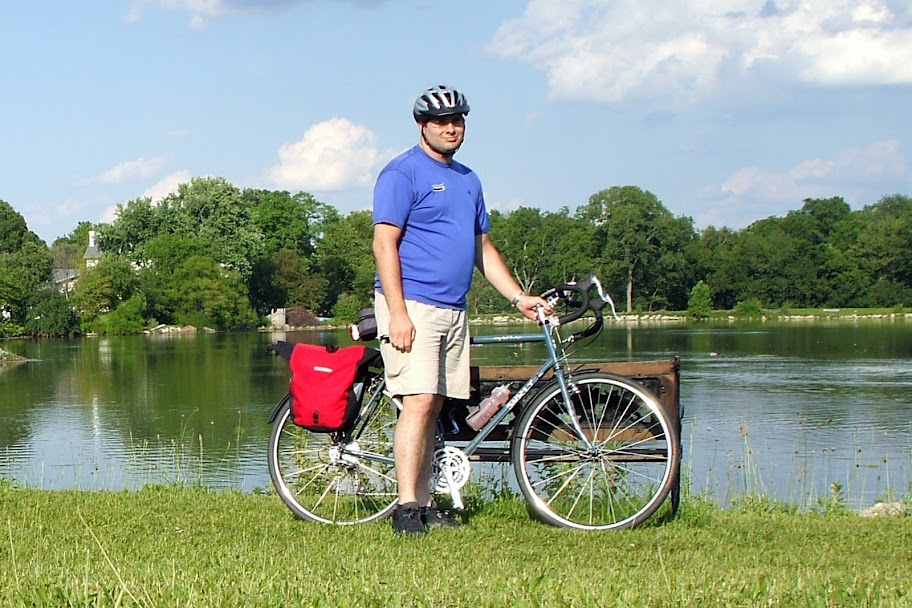 I work in data operations–very sedentary. Getting out and biking is pretty necessary for me to maintain sanity. The job is in Beavercreek, Ohio, and I commute from Dayton. The rail trail system here constantly amazes me. 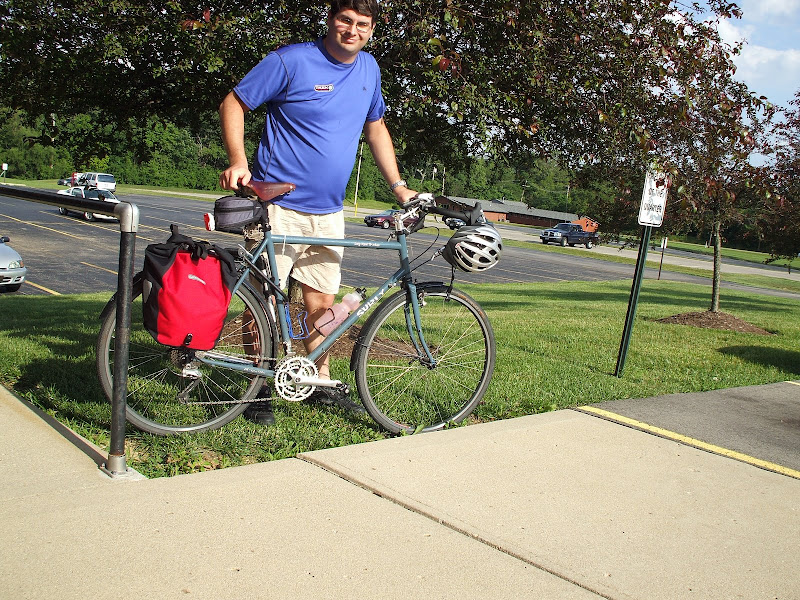 By far my most-ridden bike is a Surly Long Haul Trucker, from the first shipment of “complete” bikes they did last April. It’s a comfortable ride, and it’s plenty fast enough to get me to work on time. The cargo rack is also a high point, and the super low gearing is a life saver when I am towing my Burley cargo trailer with 100lbs of groceries up a steep hill. I also have aspirations of fully loaded touring before too long.

I also have a Santa Cruz Heckler for when I have a chance to play in the dirt, and a Giant TCR1 for when I want to go fast and care less about comfort.

I have had two flats while commuting to work. One was during bike to work week, and was discovered while leaving the park where the film crew was. I got to be on the news changing my tire, giving a quick voiceover for my boss that I have proof as to why I was late that day.

The other flat happened 3.5 miles from work just last week. Unfortunately, the spare tube was on the bike at the time. Lesson: Never ride without a spare, or you will be 50 minutes late for work.

They seem pretty impressed with the whole idea, though I can’t get many of them to consider that the idea could work for anyone but me. They also like to tell me that my saddle looks really uncomfortable (Brooks B17). 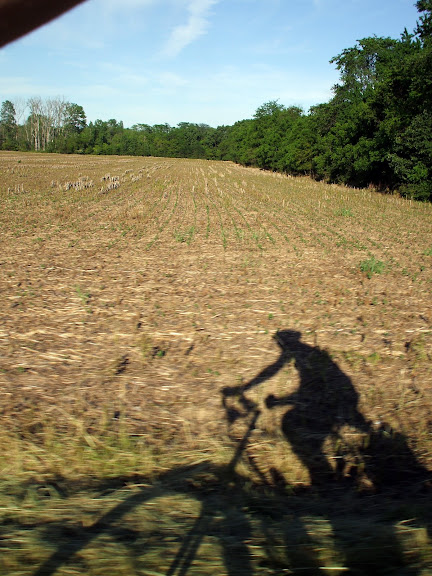 In my last hometown I tried to be active in our effort to try to get Bowling Green, KY certification as a Bicycle Friendly Community, but since moving I have been little help on that front.

I would also help out with trail maintenance at Sal Hollow, our local mountain bike stomping grounds.

If I have anything worth saying, it can be found at http://lazybikecommuter.blogspot.com

Big Thanks to Tommy for sharing his profile, I will mail your stickers shortly. By the way, you can still submit an article, review or your complete bike commuter profile to info@bikecommuters.com, I still have a few stickers left. If you have submitted your profile, be patient, I will post it in the coming week.

A few days ago, the date for the 2008 Bicycle Bash By the Bay was announced. This year, the event will be on October 19th from 11:00AM to 4:00PM at Vinoy Park in downtown St. Petersburg, Florida.

This promises to be a huge event…the organizers expect TWICE the crowd as last year (and we had well over 3000 people in 2007). And, Bikecommuters.com will be there to cover it, manning a table, meeting folks and taking photos to share with you. With a little luck, we’ll have goodies to give away raffle off. It should be a blast, if it is anything like last year’s amazing event!

Check out our coverage from last year.

And, for more information, stay tuned to the Bicycle Bash’s official website.

My kids are now out of school so that means that my car gets parked and I ride all the way from home to work. Another benefit is that I don’t have to worry about the frantic, careless drivers that plague schools when I ride by them. 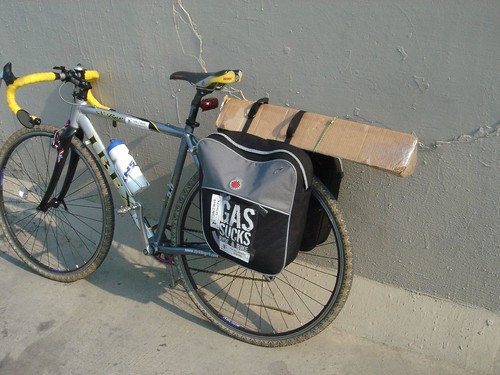 I really love my rear rack!

However, riding all the way from home means that I have a longer commute and my route is no longer flat. This can be a challenge by the end of the week, I do feel tired and a little sore but gas prices keep me motivated to keep riding. 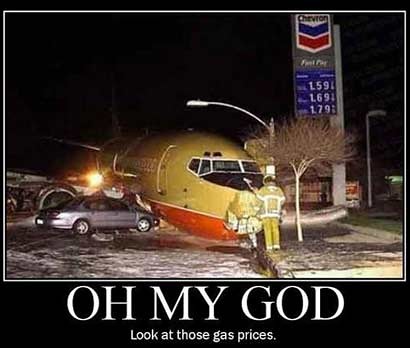 I’ve also noticed an increase of bike commuters, not so much so on the river trail, but on the streets. Could it be that since people don’t have to drive their kids to school they actually decided to ride to work?

Anyhow, I leave you with a picture from a museum that I ride by that it is sort of of an oxymoron: 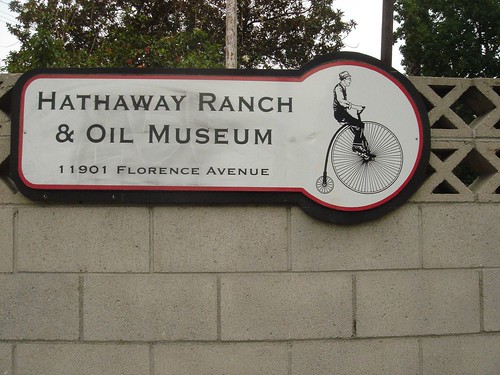