Meet John Burnham, the next pretty face in our periodic commuter profile series. John’s been a faithful reader of Bikecommuters.com for about three years, and we value his thoughtful comments. And: another Michigan resident? They must have gotten together up there and decided to flood our inboxes with profile submissions, as this is our 4th or 5th from the Great Lakes State. Read on for John’s insights into the world of bike commuting, and also check out his blog by visiting Burnhamish.

I suppose I have been a bike commuter since I was first allowed to ride the ¾ mile to my elementary school. I rode 4 miles to my high school occasionally (until I got my driver’s license), and alternated bike and skateboard commuting at the University of Illinois. Once in the working world, I biked when practical. My current commuting stint (after a hiatus of 8 years because I helped spawn offspring) is approaching its 2nd anniversary. I started visiting bikecommuters.com (where I comment as “burnhamish”) in 2008. I have a blog at www.burnhamish.com, which I plan to update more often with my cycling experiences, among other things. I promise. 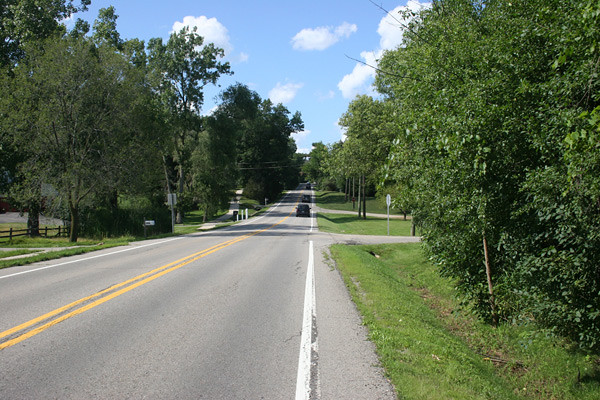 I started bike commuting because I love bicycling and wanted to prove I could commute to work and stick with it. My primary motivation is health and well-being, followed by environmental impact. My current commute is 19 miles +change (one-way) through suburban Detroit. I began with one day a week (Fridays) when my wife, Carolyn, didn’t have to work and could manage the aforementioned offspring. Fortunately (?) Carolyn was laid off in early 2009 and I was then able to ride on any day I wasn’t needed for a child taxi. I managed to ride 3 days a week regularly, which helped condition me for RAGBRAI XXXVII (my first- it was awesome!). Carolyn is now starting her own home-based business, enabling me to continue commuting by bicycle (and “train” for RAGBRAI XXXVIII).

1) Economics: Saving money? Nope. I’ve never had to pay any monthly parking fees anyway, and as for mass transit fees- wait, what mass transit? This is Detroit. Sure, I don’t have to gas up the minivan as often, but the savings in gas money is just going to feed my desire to accumulate bicycles, gadgets, and clothing. Then there’s maintenance, extra food because I’m eating more, because I’m riding more- you get the picture.

2) Health: I essentially stopped exercising after my first daughter was born in 2000, before which time I biked and did weight training pretty regularly. I began experiencing extended periods of knee pain, which my doctor attributed to my weakening leg muscles no longer fully supporting the knee joint. I discovered bicycling was a more enjoyable way to strengthen my legs than the exercise my doctor prescribed, and I started riding roads and trails again (whenever family obligations permitted). I still trigger the pain occasionally, but it goes away after a day or two, instead of months. I never was overweight, but I dropped 20 pounds off my pre-commuting weight (although Carolyn would rather I not to lose too much more, lest I be lost to a strong gust of wind).
3) Relationships: My kids (Lauren, 10, and Shae, 7) can ride bikes of their own, so we can theoretically go for family rides (if I can remember to ride slower so the rest can keep up). We just went on our first family ride to a restaurant for dinner, and I hope I can get Carolyn to come up with some ways she can do some errands by bike, thereby getting the exercise she has been missing lately. Additionally, Carolyn and I have been trying to improve our relationship with the planet by recycling more, reducing power and water consumption, preventing pollution, yada yada yada, and I figured I could cut back on CO2 emissions by biking to work. 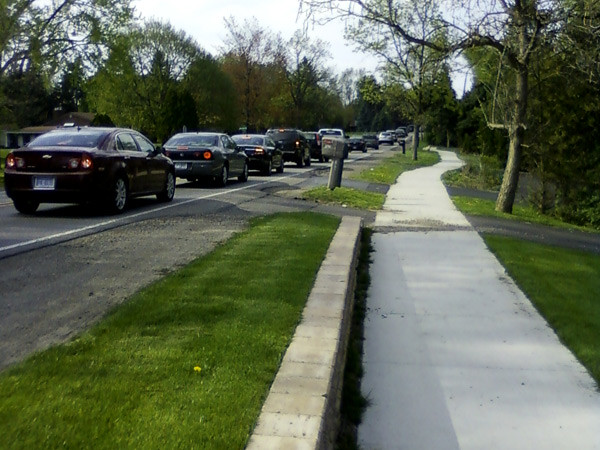 While my mad computer skilz could have provided me a good living in IT like 99.9% of bicycle commuters (at least those profiled here), I instead work as a vehicular climate control test engineer for a global automotive supplier (going on 16 years). So, yes, my income is derived from the industry I am shunning by riding my bicycle to work instead of driving. Honest, I don’t mean to “bite the handâ€? as it were- ok, maybe a little. I ride from Waterford to Southfield, Michigan (in the Detroit Metro Area), by way of a series of roads, sidewalks/MUPs, and a short stretch of rail-trail.

1988 Specialized Rock Combo (free of its commuter appointments), which had until last August been my primary road machine: 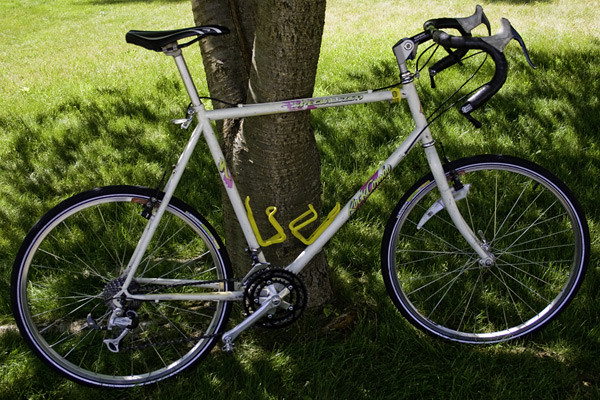 1994 GT Ricochet I use mostly off-road, but occasionally throw street tires on: 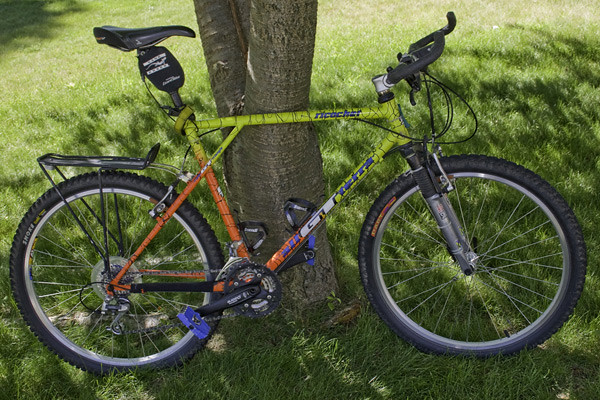 2009 Specialized TriCross Sport which replaced the Combo as my main commuter: 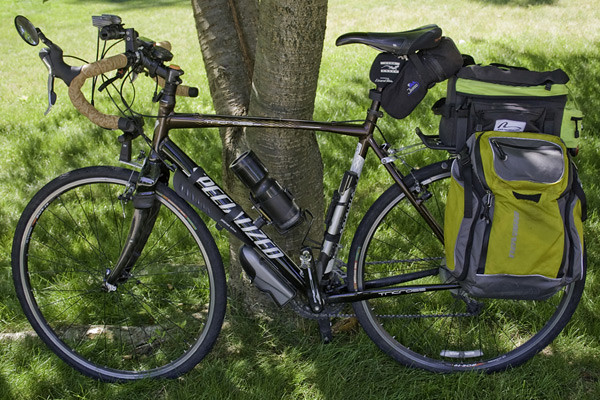 I want:
1) An Xtracycle Free Radical kit to convert my Rock Combo
2) A full-suspension 29er,
3) An Electra Hellbilly
4) A comfortable saddle for commuting
5) Carolyn to approve all of the above and not make me sell the others. She can get a little something, too.

In 2008, I responded to a request by my company for conservation and cost savings examples, and revealed my intention to ride my bike to work. Our in-house photographer requested a photo-op, and I arranged to meet him on my next arrival at work the following Friday. I was on time that day, until about three miles from work when I heard the dreaded “psssshhhhhhâ€? from my rear wheel. I thought it was just a simple puncture, so I popped in a spare tube and pumped away. I noticed the bubble of inner tube (“outerâ€? tube, at this point, I suppose), just before it burst, along with any hope of making it to work on time. It had been eight years since I rode this route, and I wasn’t sure exactly how far from work I was and how long it would take me to walk, so I made the effort to patch the lesser damaged tube, and slipped a laminated card between the tube and tire to prevent another sidewall breach. I rolled in an hour late, and arranged for another photo session the next week.

(Editor’s note: the photo for the company newsletter has a caption that John refers to below)

Apparently, I am riding to “support fuel economy.” Doesn’t improve my minivan’s mileage, but they can spin it however they want. My company is big on “lessons learnedâ€?, so my lessons learned here are:
#1 Inspect your tire thoroughly after a flat
#2 Keep your rims true and threadlock chronically loose spokes.
#3 Align your brake pads properly to avoid contact with the sidewall should you forget #2.
#4 Carry paper money or something laminated but flexible, should you forget #’s 2 and 3.

“That’s great,â€? when they hear I ride, then “you’ve got to be kidding!â€? when they hear how far, and from where. Carolyn fears for my life, so I try not to tell her just how many close calls I have actually had 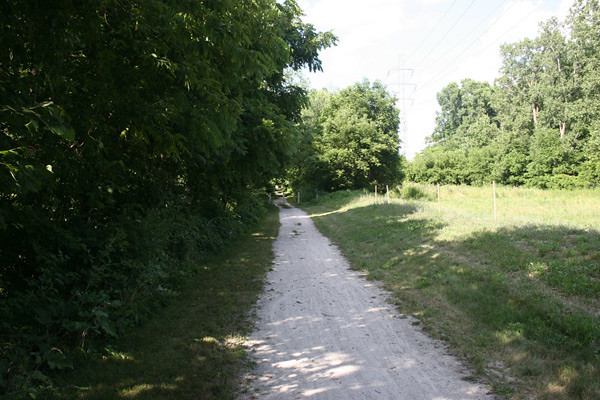 I am a member of Rails-to-Trails and the Michigan Trails and Greenways Alliance, but my participation is purely financial right now. I am still waiting for that activist itch (and for my daughters to get self-sufficient enough so that I have more time and energy to scratch that itch). I am encouraged by the Michigan House of Representative’s passing of Complete Streets legislation (now in the Senate), and by the construction and repair of the MUPs along my route.

Over the years I have become pretty comfortable and confident riding amongst the four-wheeled death boxes, but I don’t think most drivers are comfortable with bicycles in the road, judging by how wide a berth they give me. I want them to give me a safe margin, but not so much that they endanger their lives and the lives inside the other four-wheeled death boxes in the oncoming lane. I try to be gracious toward the clueless, but slip now and again, especially with drivers who block a crosswalk, or don’t bother to look BOTH ways at an intersection (invariably they are only looking in one direction, and it isn’t mine). I always assume someone will do the wrong thing, and I prepare accordingly. Most often I assumed correctly, but am pleasantly surprised when proved wrong. 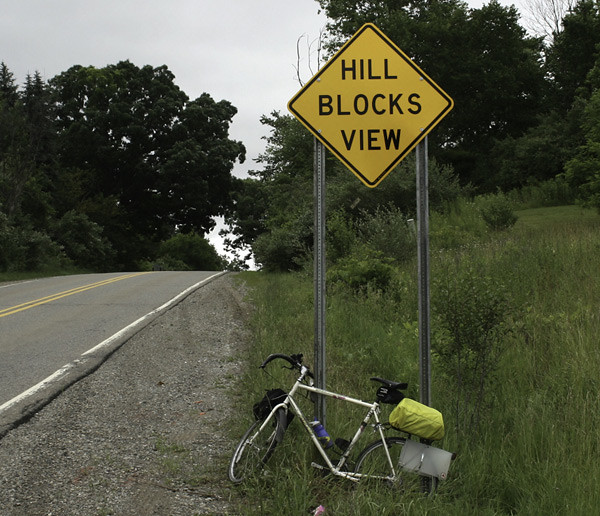 I’m all for helpful signage, but really.

I conclude by encouraging all bike commuters (new and old) to develop basic emergency repair skills such as repairing a flat, recovering from a torn sidewall (see above), removing a tire without levers, truing a wheel after breaking a spoke, and adjusting cables. And for crissakes wear a helmet- this isn’t Amsterdam!

We’d like to thank John for sharing his words and pictures and remind the rest of you that if you’re interested in being profiled right here, you can drop us a line at ghostrider@bikecommuters.com or info@bikecommuters.com. Happy riding!